Police Can Confiscate Motorcycles For “Insane” Riding In Denmark 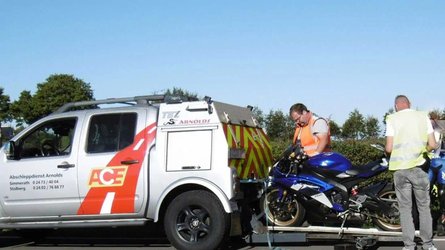 Citizens and tourists who ride in Denmark, don’t go “insane” on your motorcycle or car lest you face the consequences which include confiscation with a one-way trip to the auction block.

Yep, you heard that right, the Danish police have been cracking down on “insane” driving and riding in Denmark in an effort to stamp out dangerous and “anti-social” behavior on the road.

March 2021, The Danish government enacted a law that allows the police to seize the vehicles of reckless drivers, two-wheeled or four-wheeled. Last year, ABC News reported about a man who just bought a Lamborghini Huracan in Germany for $310,000 USD only to have it confiscated by the cops on the way to Norway from the dealership. There was a bit of speed involved, and the guy hit 147 miles per hour (236 kilometers per hour) on a Danish highway where the speed limit was only 81 miles per hour (130 kilometers per hour).

That wouldn’t be the last of the “insanity” as FEMA, otherwise known as the Federation of European Motorcyclists Association, reports that the Danish police are confiscating up to three vehicles per day, both cars and motorcycles (No numbers were stated as to how many motorcycles are seized). Six months after the new law was enacted and implemented, police seized a total of 510 vehicles, with 623 cases filed in 586 cases involving “insane” driving.
As stated earlier, there will be no impound lot for these confiscated vehicles, nor will there be a warning or a fine. It doesn’t matter if it’s your name on the papers, rental, or your friend’s bike that he lent to you for a day because the Danish authorities will seize the bike if they catch you doing something “insane” and send it straight to auction.

So let’s remove the quotation marks and define what it is. According to the Danish Road Traffic Act of 2021, as reported by Ald Automotive, “vehicles used for reckless driving, incl. motor racing and driving races will be confiscated by the authorities and sold by auction. This applies regardless of whether you own, lease, rent, or borrow the vehicle in question. Thus, if a commercially leased company car is used for reckless driving, the same rules apply.” Rental or leased cars are also affected by this law, and it’ll be quite expensive to bear the expenses of a vehicle that’s not yours so driving recklessly in Denmark can get very-very expensive.

Reckless driving is defined within two categories, the difference being whether you hit a person or not. Still according to Ald Automotive’s article:

“1. If you do not hit anyone, it will be categorized as reckless driving in the following cases:

2. If you hit a person, it will be categorized as reckless driving in the following cases: