It used to be that chasing glory at the Dakar Rally was reserved for a privileged few. But as side-by-sides are becoming more than just a niche hobby, amateurs and pros who want to get a taste for rally raid racing without blowing a fortune on a full-blown, purpose-built Dakar race rig have another option.

The Polaris RZR is well known for being robust, fast, and easy to drive. Added to that, they’re affordable and easy to work on, factors which have led side-by-sides to become the fastest growing class in rally raid racing. But don’t be fooled; although they may be affordable for the masses, these things are still proper premier-class race rigs.

In both SSV classes, vehicles are limited to 81 mph and a very close to stock configuration. That meant the team had to rely on OEM Polaris parts to stand up to devastating abuse. (Rallyzone/)

The good news for racers and amateurs is that the 181 hp Polaris RZR Pro XP—with its turbocharged 925cc engine and optional active suspension—is pretty close to race ready right off the showroom floor. UTVs run in the T3 and T4 classes, with T3 machines being purpose-built prototypes and T4 rigs being based on production vehicles. The T4 rigs are really close to their stock counterparts, with modifications focused mostly around making the rigs survive 12 days and 9,300 miles of racing in gnarly terrain. Both classes are limited to a top speed of 81 mph, which a RZR Pro XP can very nearly hit in stock form. 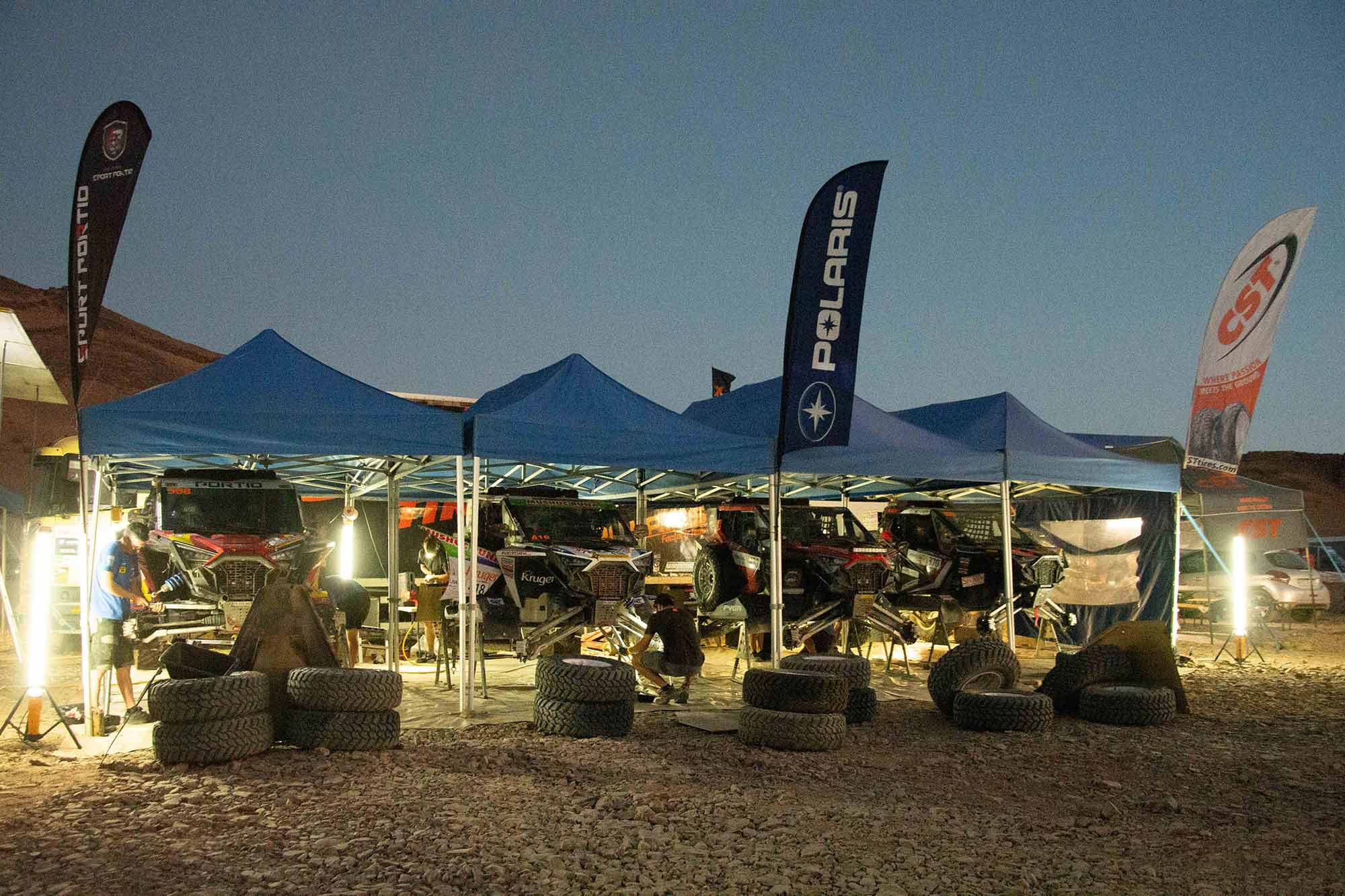 In the bivouac at night, teams go through spare parts faster than fire through paper. (Rallyzone/)

The FIA (International Automobile Federation) rules stipulate stock suspension and drivelines. The French Xtremeplus team, which represents the Polaris factory on the Cross-Country Rally and Bajas in Europe, Africa, Asia, and Middle East, has developed a chassis that complies with FIA safety regulations.

“We started from scratch designing the roof together with the body, the cooling system, and the dashboard inside the car,” team owner Marco Piana said. “According to the rules, we need to respect the exact size and dimensions of the original body, but we can play with the material so that the final result is a stronger and more robust chassis, ready to face the most grueling race on earth. This is the best option also in terms of safety because the safety cell, the roll bar, is included in the chassis.”

The design and development is done directly by Xtremeplus in France. The team has been collaborating with Polaris since 2006, starting with quads before branching into side-by-sides in 2011. 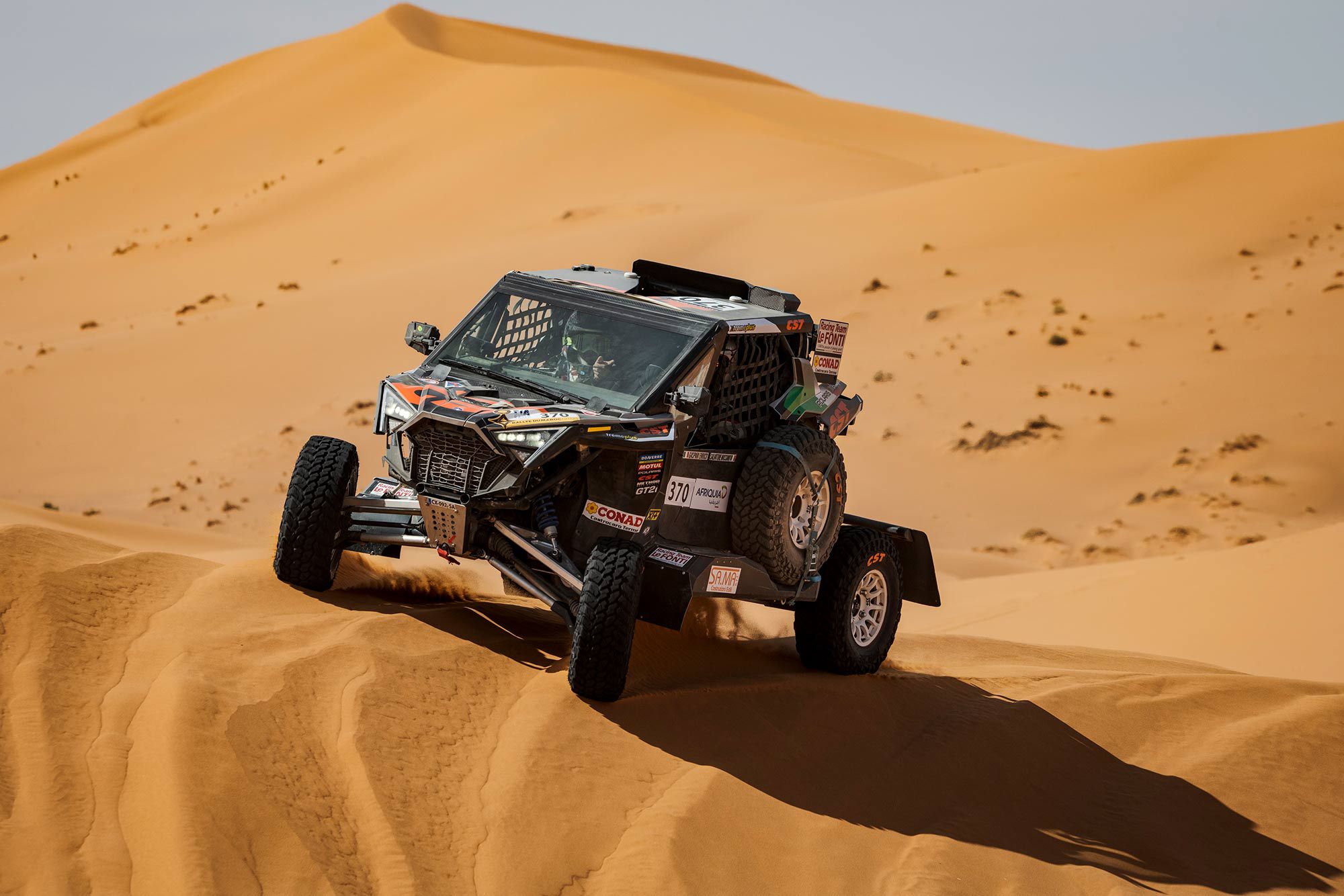 Since the Dakar Rally moved to Saudi Arabia, teams have been forced to contend with sand mixed with jagged rocks—a nasty combination. (Rallyzone/)

“Aerodynamics plays an important role in racing,” Piana said. “The shape of the vehicle and the roof are designed to have the best airflow, but in this field we cannot compete with the development done in other sports due to a different budget, but also because according to the FIA rules, we need to respect the original size of the vehicle.

“We use carbon fiber for the car body that we replace from the original. The rest has to be done in aluminum because the conditions on the Dakar are so hostile that the light parts used in roadracing wouldn’t last the first kilometer,” Piana said. “You need to find the balance between the weight and the strength of the parts.”

The side-by-side classes have power and speed limits imposed by the rule book.

“Xtremeplus races with the latest 181 hp Polaris Pro XP Turbo 2021. But in order to compete in the T4 category of the FIA Cross-Country Rally and World Cup, we need to put an air restrictor of 25mm to reduce the power to 146 hp and a speed limit of 125 kph,” Piana said. “As we cannot touch the engine, we have developed the electronics to manage the power reduction. The ECU and the dashboard monitor all the important data that we need to know for the smooth and efficient running of the engine and the vehicle. For safety we also replace the whole electric system because in racing we know we are going to face mud, water, dust and we have to be able to trust the system and to change it quickly if needed.” The suspension layout has to stay stock, but you are allowed to add stouter components. (Rallyzone/)

Reliability is key to winning a rally raid event, but the Pro XP has been stout from the get-go. The rig that has carried Jose Luis Peña Campo and Rafael Córdoba Tornabell to third in the T3 category of the FIA Bajas and Cross-Country Rally championship, for example, relies on standard Polaris parts, and all maintenance is done at the bivouac by Xtremplus. 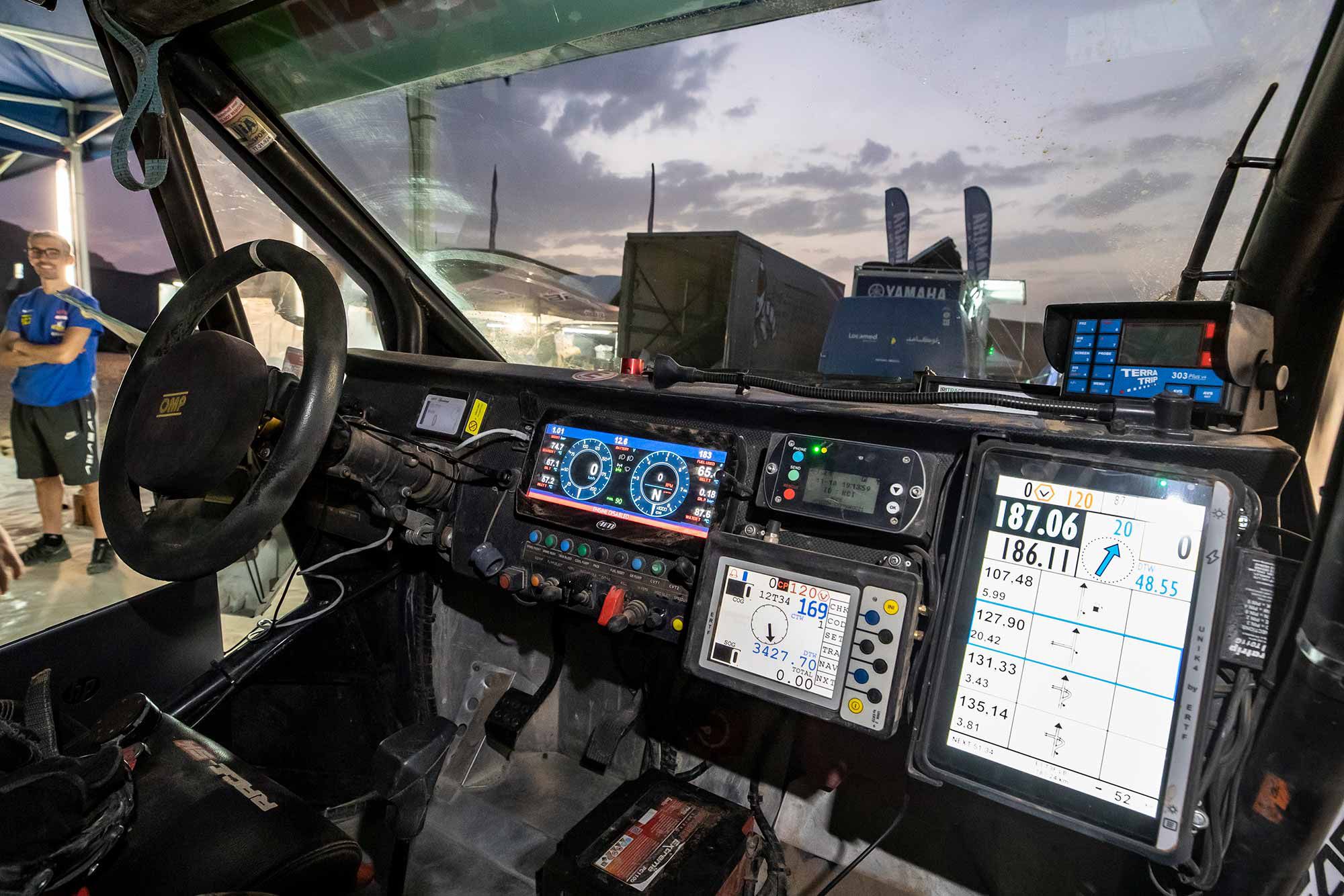 The dash of the Xtreme Plus RZR looks like a Christmas tree, but you won’t find Ride Command here. Rally raid calls for navigation systems above and beyond what the factory offers. (Rallyzone/)

The RZR Pro XP’s deft handling is yet another feather in their cap on the long desert stages. “The side-by-sides are unbeatable on the dunes,” Enrico Gaspari said at the Morocco Rally in October. “Compared to a car, a buggy, or a T1, the Polaris is much more forgiving. It flies on the dunes and ruts, rocks, streams, mud, or broken trees; the Polaris eats all of it up. I felt confident I could toss the UTV over and almost into anything in its path.” 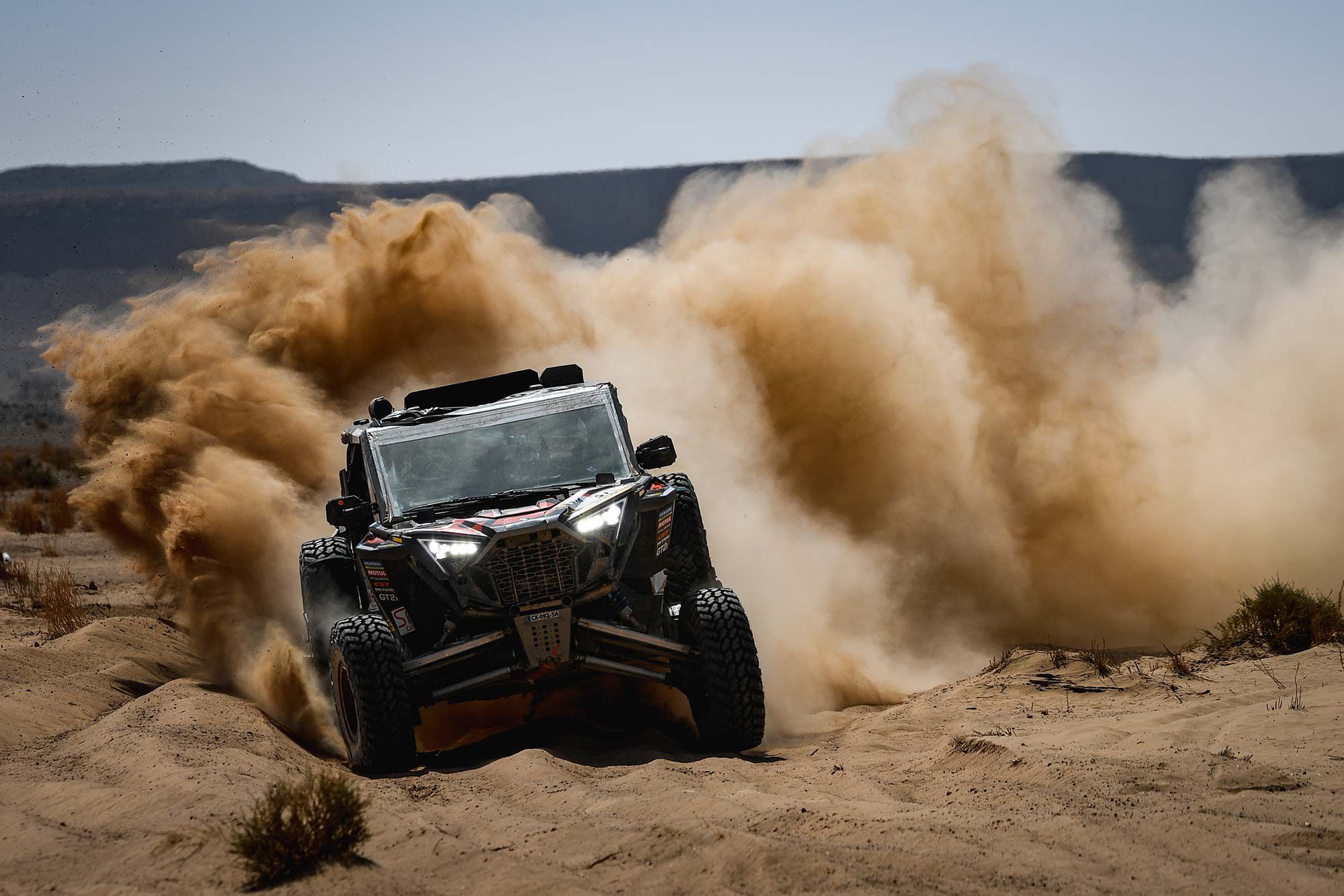 Tires can make or break your race in the Dakar Rally because the Saudi Arabian soil alternates between sand and sharp rocks. The conditions are a crucible for machines, but downright torturous on tires.

“In terms of tires, you need to play with the pressure or find a compromise that can fit both situations (sand and rocks). It’s quite challenging, which is why for the Dakar and the Cross-Country Rally championship we have chosen the CST Apache tires. They are robust and safe, able to make the difference in a stage,” Piana said.