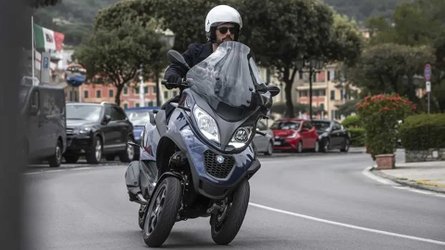 On September 20, 2021, the Piaggio Group announced that it won two separate European lawsuits it filed against Peugeot Motocycles. Both the Tribunal Judiciaire in Paris, France, and the Court of Milan in Italy found Peugeot guilty of infringing on a European patent related to the Piaggio MP3’s particular three-wheeler technology.

In specific, Piaggio says, it relates to the leaning technology used by the MP3 to allow it to tilt going around corners, much like motorcycles and scooters do. For those unfamiliar, these rulings directly relate to the Peugeot Metropolis three-wheeled vehicle, which Peugeot has primarily sold in European markets since its introduction.

What’s the sentence? In France, Peugeot must pay damages of 1,500,000 Euros to the Piaggio Group, on top of additional infringement and legal expense-related penalties. Additionally, the French court ruling effectively states that Peugeot must immediately cease production, sales, possession, importing, and exporting of any vehicles that make use of the infringing technology. If Peugeot does not comply, the company must pay a fine for each and every “counterfeit vehicle,” in Piaggio’s terms.

Over in Italy, the Peugeot Metropolis is prohibited from importing and exporting in the same way as the French ruling dictates, as well as advertising and marketing activities. If Peugeot does not comply in Italy, a fine of 6,000 Euros will be charged for every vehicle sold after 30 days following the announcement of the Milan court’s sentence.

Additionally, the Milan court ruled, Peugeot must completely cease sales of the Metropolis in Italy within 90 days. All “counterfeit vehicles” must be withdrawn from sale within that time frame, or else Peugeot will be charged an additional 10,000 Euros for every day of noncompliance. The Piaggio Group says that these lawsuits are just part of its larger pattern of activities to defend against design and technological infringement.

Since 2019, Peugeot Motocycles has been under the ownership of the Mahindra Group. A subsidiary of Mahindra, Classic Legends, currently owns the Jawa, Yezdi, and BSA motorcycle brands. It’s not clear how much, if any technology sharing has been done between the various brands under the Mahindra umbrella. None of the other motorbike brands listed here have breathed a word about any leaning three-wheeler vehicles so far—and as long as these rulings stand, it doesn’t seem likely that they ever will.