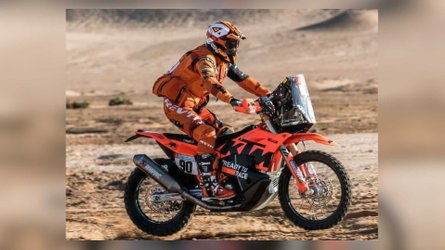 Stage Six of the 2022 Dakar Rally is now complete, and how did it go for the bikes? As winner of Stage Five, that entitled Danilo Petrucci to start proceedings off for the motorbike class. Tracks from the cars and trucks on Stage Five were still very much present in the area, which could be seen as a positive thing for navigation—but was it?

Unfortunately, as Petrux himself later explained, it ended up making things a bit more difficult than you might at first expect. “Yesterday, I won, so today I had to start first, on the same track that yesterday did cars and trucks, so hundreds of 4×4 with hundreds of horsepower,” his Instagram post began.

“Everything was completely destroyed with stones hidden in the dust. At Kilometer 3, I found a step in the middle of the sand when I was going at 100 kilometers per hour, more or less (around 62mph). It did send me to the moon,” Petrux continued.

“I restarted but I was not really focused. Rider started after me, Ross Branch (Yamaha), did the same but he has broken his leg. Fortunately, at that moment we got the helicopter above us that landed and sent the rider in another route. We arrived at kilometer 160 in nine riders when they told us the race was cancelled for safety. I’m doing good, only some stitches on my arm,” Petrucci concluded. Additional reports add that bikes were sent for refueling after the remainder of the stage was canceled.

We’ll link his Instagram entry in his sources, but it includes images of his arm injury, so be aware if that’s something you may find disturbing. Official Dakar rankings for Stage Six in the bikes show Petrucci finishing the stage in 39th place, with the top three spots on the stage taken up by Daniel Sanders (GasGas), Sam Sunderland (GasGas), and Matthias Walkner (KTM).

Dakar officials note that this is Petrucci’s second fall during the 2022 Dakar Rally, with the first having taken place on Stage Five. In an official news post, notes read that “Yesterday, [Petrucci] fell when avoiding crashing into a dromedary.”

Tomorrow is a new day, and there’s one full week of action left to go in the 2022 Dakar Rally! Who will prevail? What stories will unfold? Now you know as much as we do, so we’ll all have to find out the future together.