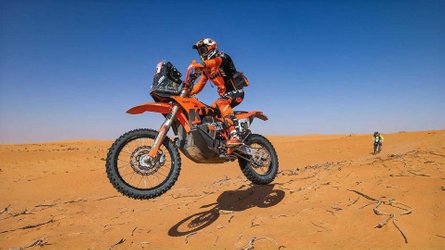 What do you think of when you think about a successful Dakar Rally run? If you’re a first-timer, just finishing such a grueling rally raid is a major accomplishment and one you can be proud of. Luckily for Danilo Petrucci, his first-ever Dakar wasn’t cut short after a mechanical failure in an early stage, thanks to some key rule changes for 2022. Imagine everyone’s amazement when Petrux managed to place third on Stage 4, taking his first Dakar podium because he was able to restart.

Not only that, but Petrux was also KTM’s top finisher for Stage 4 of Dakar 2022, finishing a long way ahead of seasoned competitors Matthias Walkner (eighth), Kevin Benavides (16th), and Toby Price (30th).  It’s impressive any way you slice it, but especially so for a Dakar rookie. Of course, Petrucci is out of the overall rankings because he had a DNF on that earlier stage, but it’s still extremely exciting—and as the man himself recently said, he doesn’t plan for this to be his last appearance at Dakar.

Stage Four consisted of 465 kilometers that KTM describes as being comprised of “fast tracks and more technical rocky sections and river crossings.” For this stage, Petrux started 22nd based on his results in Stage Three. Since he finished Stage Four so well, that means he’ll be starting near the front tomorrow.

“It was a really fast stage today with some very fast pistes. I was able to ride in a group and had a lot of fun, I really enjoyed it. It was such a long stage but fortunately I didn’t make any mistakes and was able to find a good rhythm. I learned a lot today too, so now I’m really excited for tomorrow and the rest of the event,” Petrucci said in a statement.

Overall, Petrux’s third-place finish on Stage Four came via a final time that was only six minutes and 53 seconds off from Stage Four winner Joan Barreda, who is on a Honda. Second place on Stage Four went to Pablo Quintanilla, also riding for Honda, who was two minutes and 16 seconds faster than Petrux.