Petrucci Jumps Back In The Saddle For Stage Three 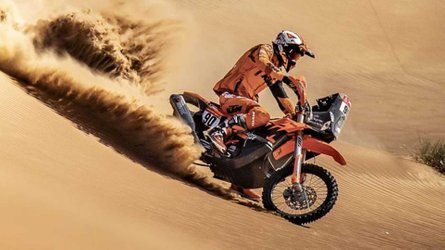 After Tech3 KTM rider Danilo Petrucci’s unfortunate early retirement from Stage Two of the 2022 Dakar Rally, he and the team had a big decision to make. He could just retire completely from the event, which would have been his only choice in the years prior, but this year there was another option. Thanks to a rule change for 2022, officials would allow a rider sidelined with a mechanical failure to restart the next stage with a significant time penalty.

Essentially, if Petrux opted to continue, that would knock him out of the standings. However, if your main goal is to gain experience at Dakar instead of necessarily being concerned about where you place, it could be a great option. This is, after all, Petrucci’s first Dakar attempt, so he would probably appreciate all the experience he can get. Especially if he plans to do more rally competition in the future.

What do you think he chose? Racers are, in fact, gonna race—so even though this type of riding is worlds away from MotoGP, that same basic spirit is still there. Give a racer the right opportunity to keep competing, and chances are excellent they’ll take it.

Luckily for Petrux, the Tech3 KTM mechanics were able to diagnose the problem that sidelined him on Stage Two. An electrical fault was to blame, and it was apparently simple enough to remedy that Petrucci was able to successfully mount back up and contest Stage Three.

Flooding near Al Artawiyah meant that Stage 3 had to be rerouted from what was originally planned, but Dakar competition was successfully able to run on the revised route. After the day was complete, Petrux’s time placed him 22nd in the bike class before his time penalty from the previous day’s retirement. Wet sand changed the characteristics of competition just a bit, but although it’s apparently painful on Petrux’s injured ankle, he ultimately said it was worth it.