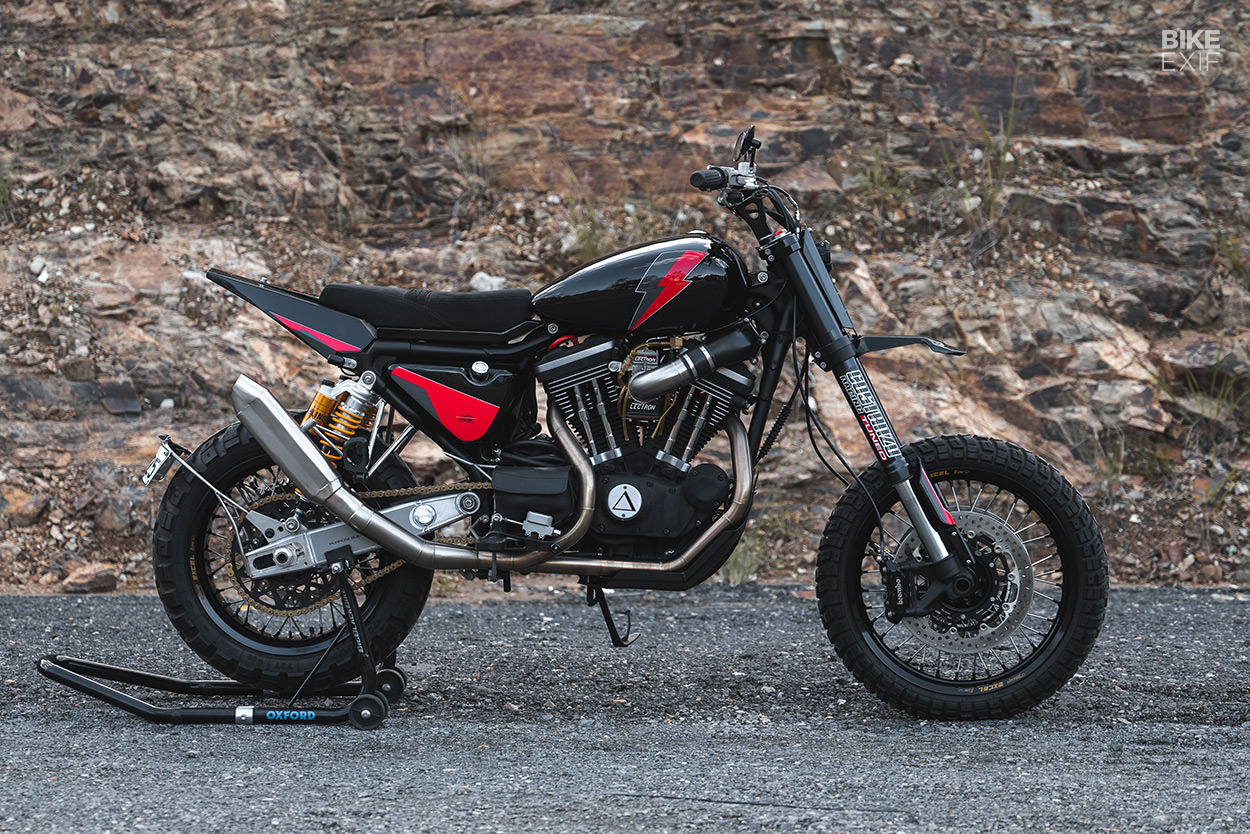 Not all scramblers are created equal. Some wear high pipes and knobbly tires, but may never go off-road, while others are made to be punished. It’s builds like this that really get our hearts racing: Purpose Built Moto’s 1998 Harley-Davidson Sportster, a lean scrambler packing real dirt credentials.

The Queensland-based team know what they’re doing when it comes to throwing a Harley around off-road, as this is their second scrambler based on H-D’s perennial Sportster. Their first was featured in the must-see documentary, Wide of the Mark, smashing through the Tasmanian bush. 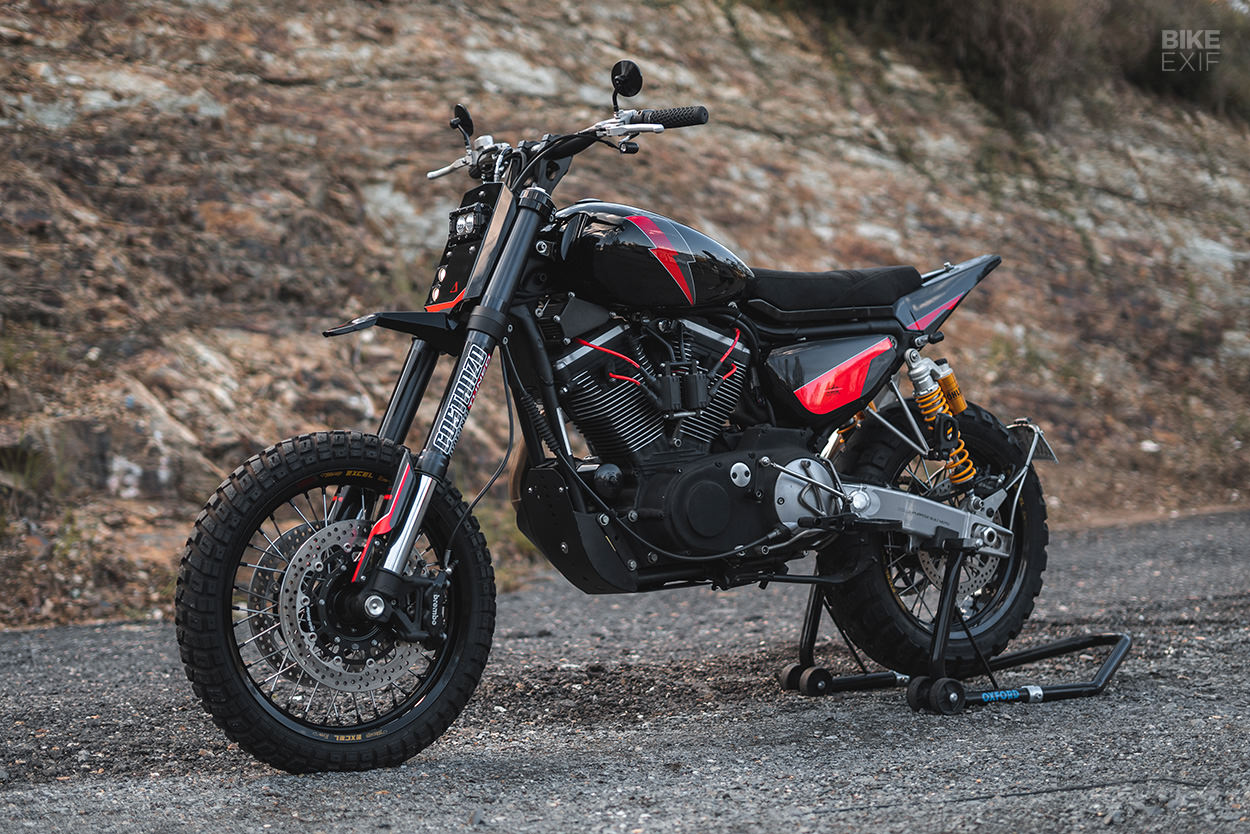 And that’s how the latest Sportster project kicked off—while their first was still under construction. “During the build process for the first Sportster, the customer visited the shop,” says Tom Gilroy from PBM. “He saw it on the bench and he told me I had to build him one.”

So after the team limped back from Tasmania, smitten with the performance of their first Sportster scrambler, and armed with a long list of improvements fresh in their mind, they set to work building their next big dirt basher. 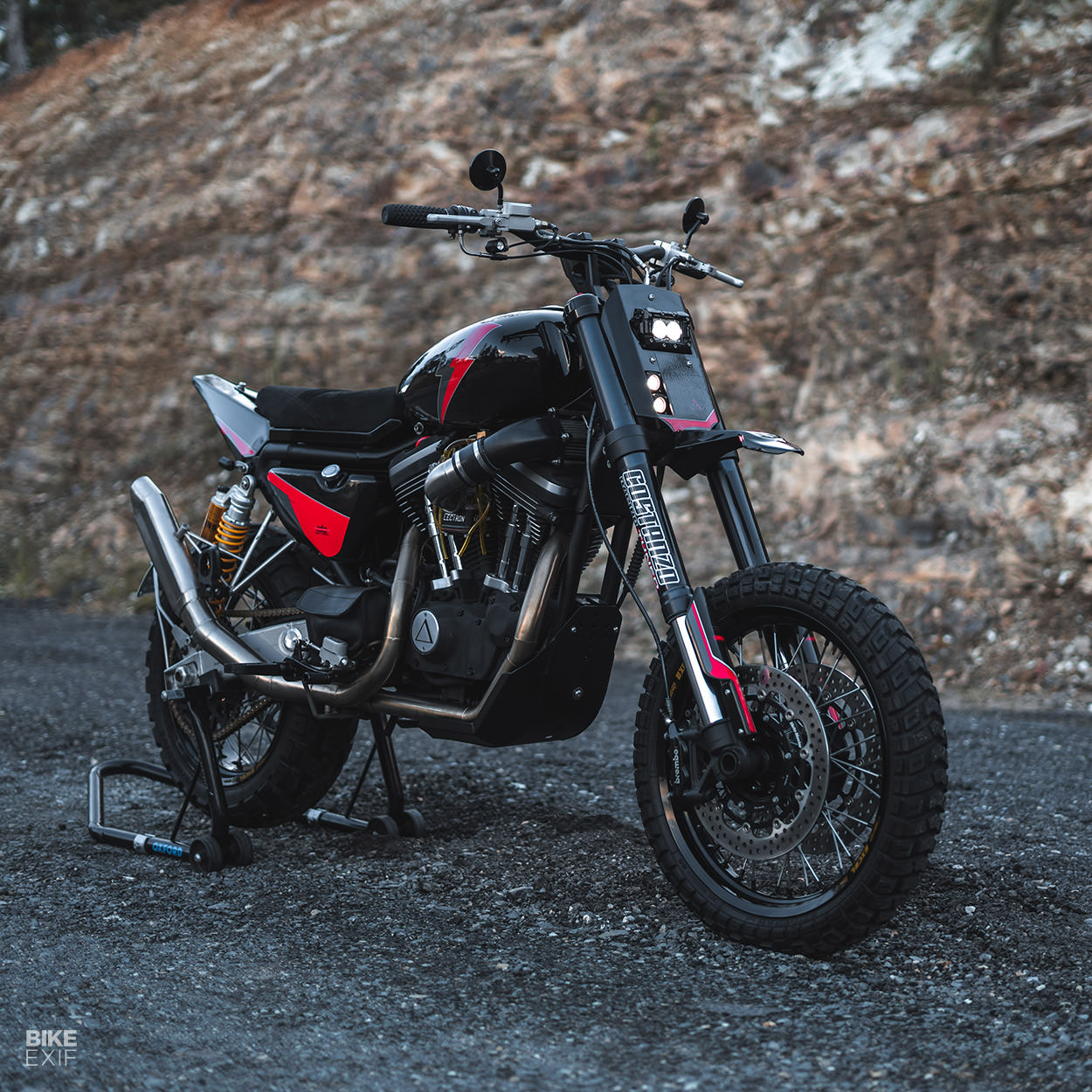 The project started with a venerable 1998 XLH1200S. For the uninitiated, it’s long considered a real ‘rider’s’ Harley, and came from the factory with adjustable suspension, twin discs and a decent claim to the Sportster name. But the only thing that would remain was the twin-spark engine and the lighter rigid mount frame—because Tom had big plans.

“I wanted to push a little further in terms of the design on this one, creating a distinctive motocross feel across the whole build,” he recalls. 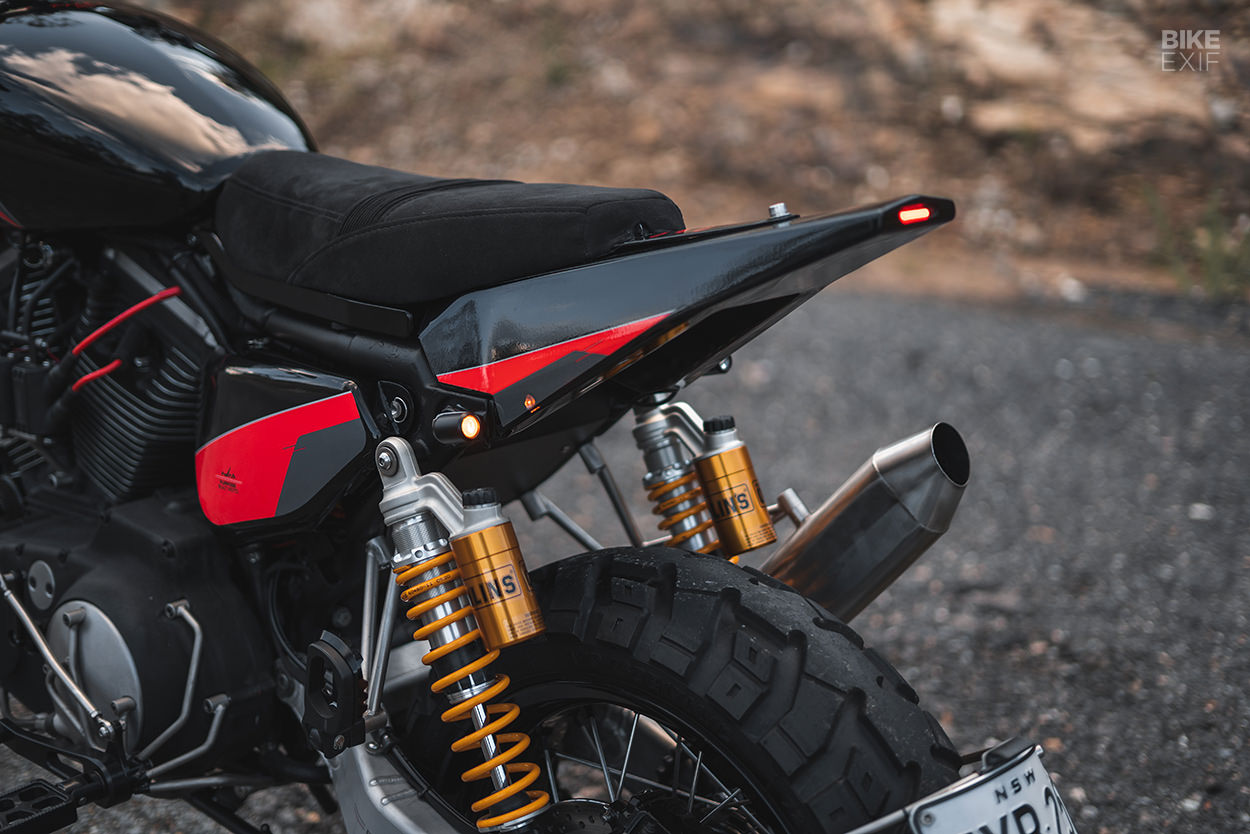 That striking off-road bend started with the suspension, where no expense was spared to keep the big V-twin under control.

The front end was nicked from a KTM 1190 Adventure, paired to a Haan hub and a 19” Excel rim. The rear runs a Trac Dynamics swingarm, 17” rim and twin Öhlins shocks. Both ends were given a work over by local off-road suspension whisperer, Costanzo Racing. 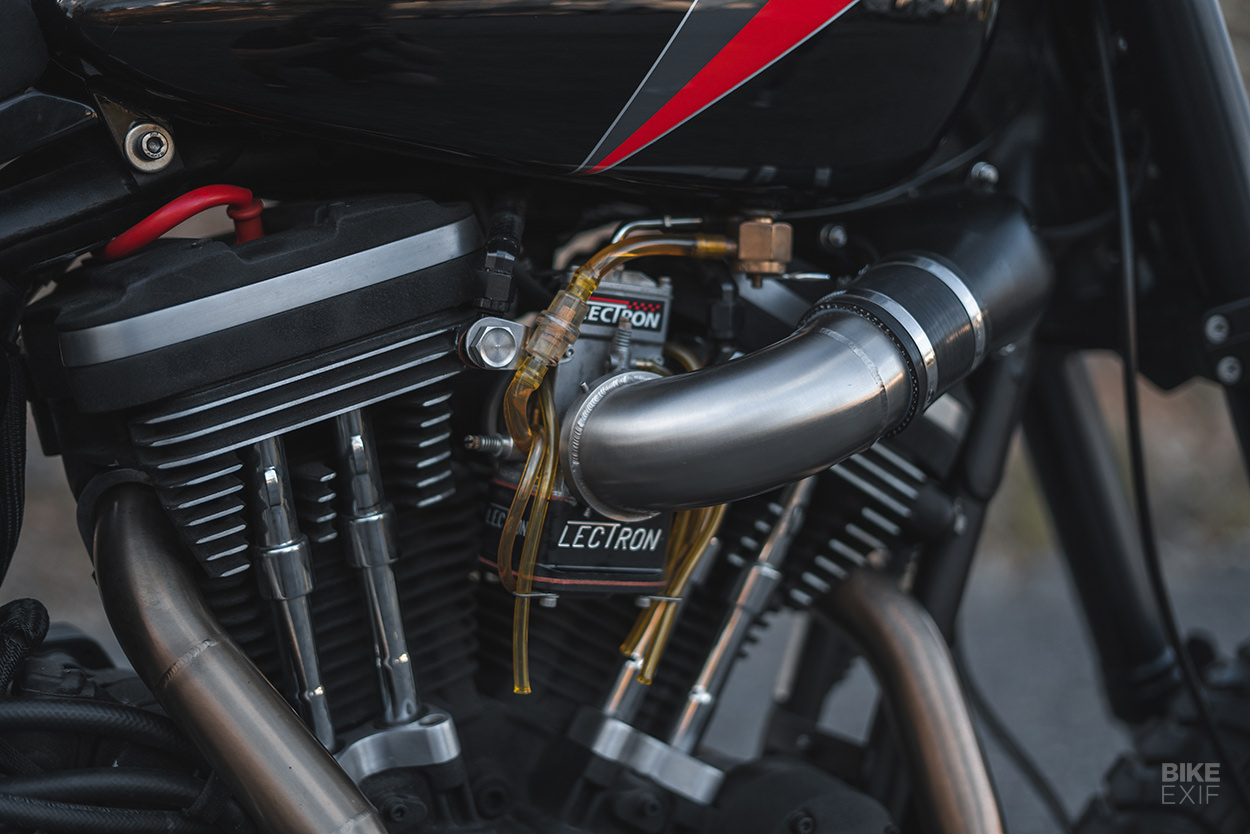 Meanwhile, the engine was stripped and rebuilt with an emphasis on reliability, but with a solid increase in power too. A new clutch, mild cams and some porting work helped to push the engine to zero hour status.

Fueling comes via a Lectron carburetor, which breathes through a clever custom-built intake arrangement. The air filter is a DNA Filters model designed for a Ducati 1299, fitted via a handmade mount and a 3D printed carbon filament intake plenum. 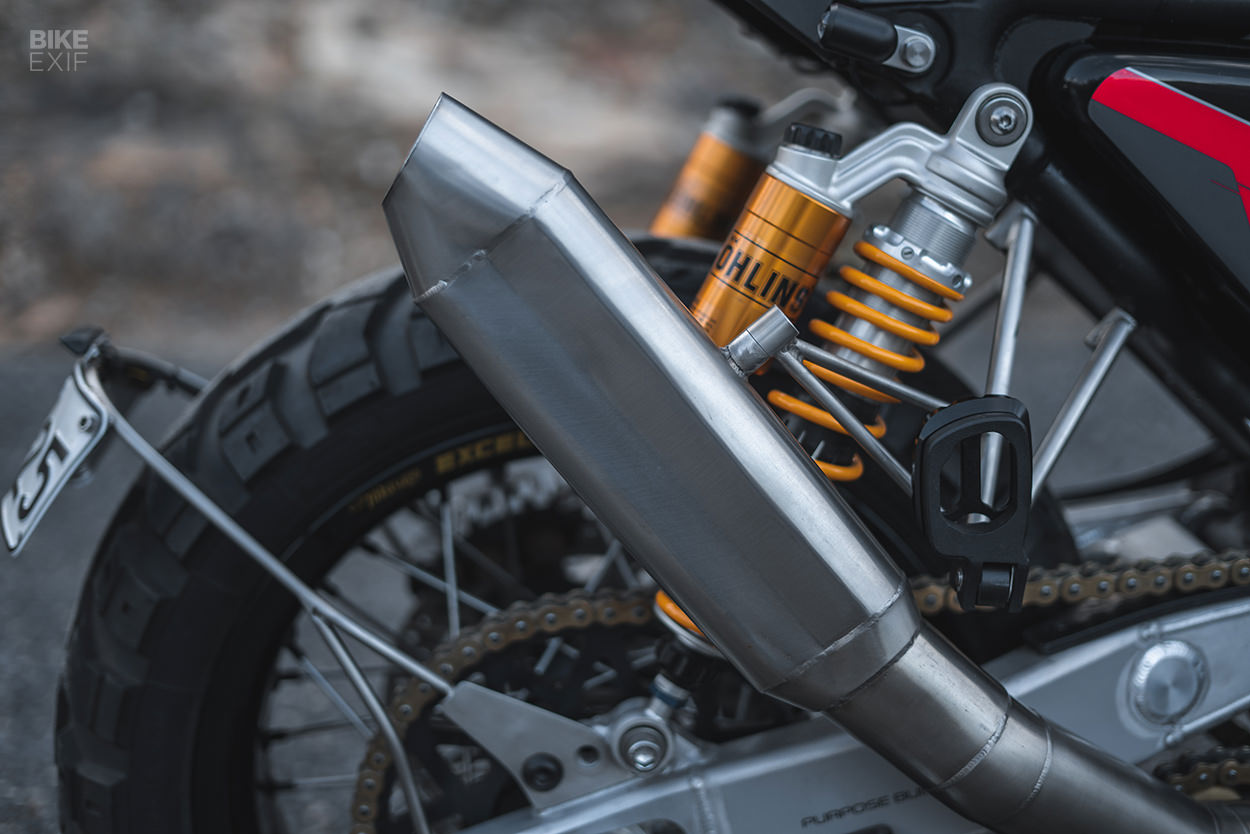 The Sporty exhales through a shop-built two-into-one stainless system, set low but exiting long and high at the rear. It also makes its way around a pair of rear pegs as the customer plans on pillioning his son and scaring the living daylights out of him. All that engine work means the Sportster now punches out 75 horses of reliable, tractable power.

That’s nothing to sneeze at when you look at the pared-back bodywork and the amount of weight the Harley has dropped. It now weighs a measly 447 lbs dry. 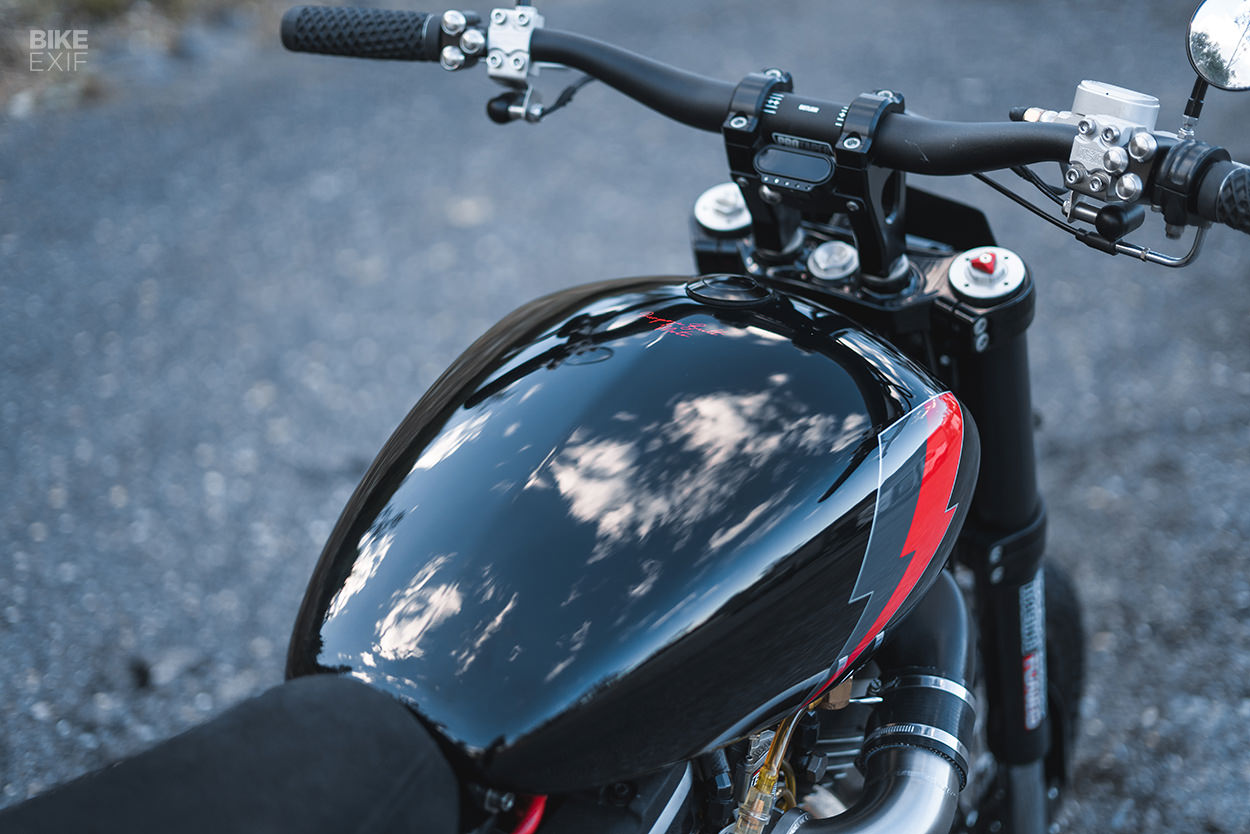 The tank was taken from a 2018 Street Bob and modified to suit the older carbureted engine. “I’ve always liked the short bulbous design, and although our other handmade body parts don’t exactly ‘match,’ I feel like the proportions and balance have been struck pretty well,” Tom says.

The fenders have been hand-shaped and fabricated from aluminum, and the back end and integrated tail light assembly is Tom’s favorite part of the build. “Simply because I never thought I’d see something like that on a Sportster,” he explains. “It gives it a real modern dirt bike edge.” 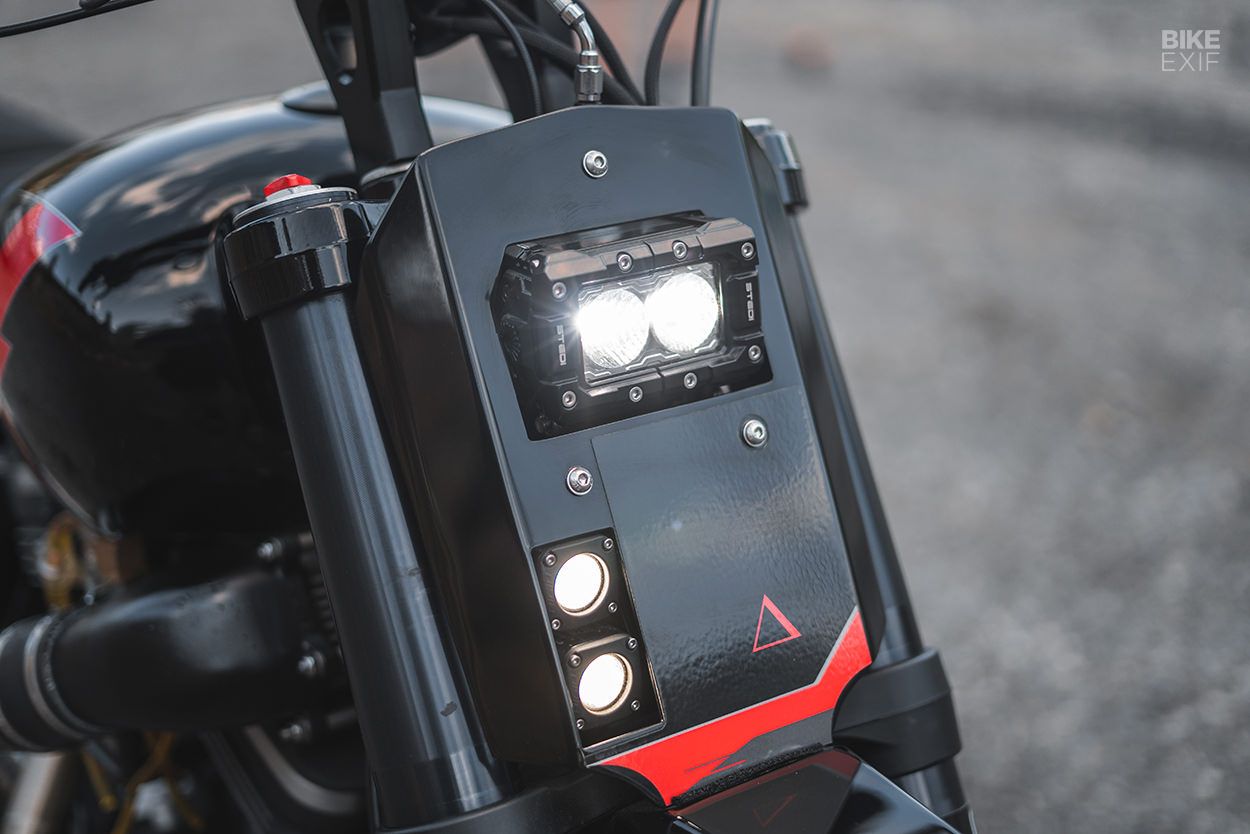 Lower down are chunky off-road foot pegs and a burly bash plate. 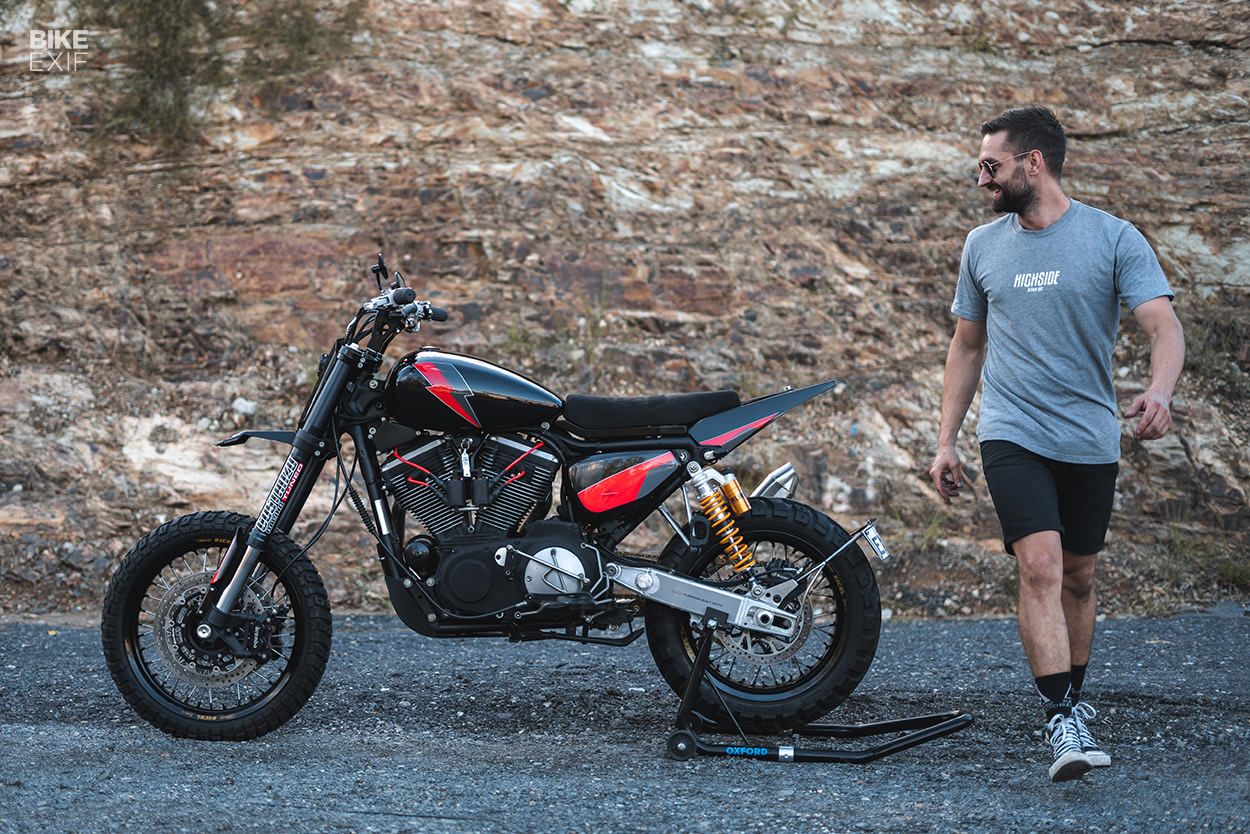 That monumental shift away from the lines of a traditional scrambler is also evident in the livery. “When it came down to the finish on this bike I wanted something as bold as the lines of the body,” Tom says. “I had sketched out a twin bolt design on the tank, but I wanted the whole motorcycle to have the same feeling.”

Josh from Ride Design Co. came to the party, and hand-templated the panels to work up a graphics kit for the scrambler. 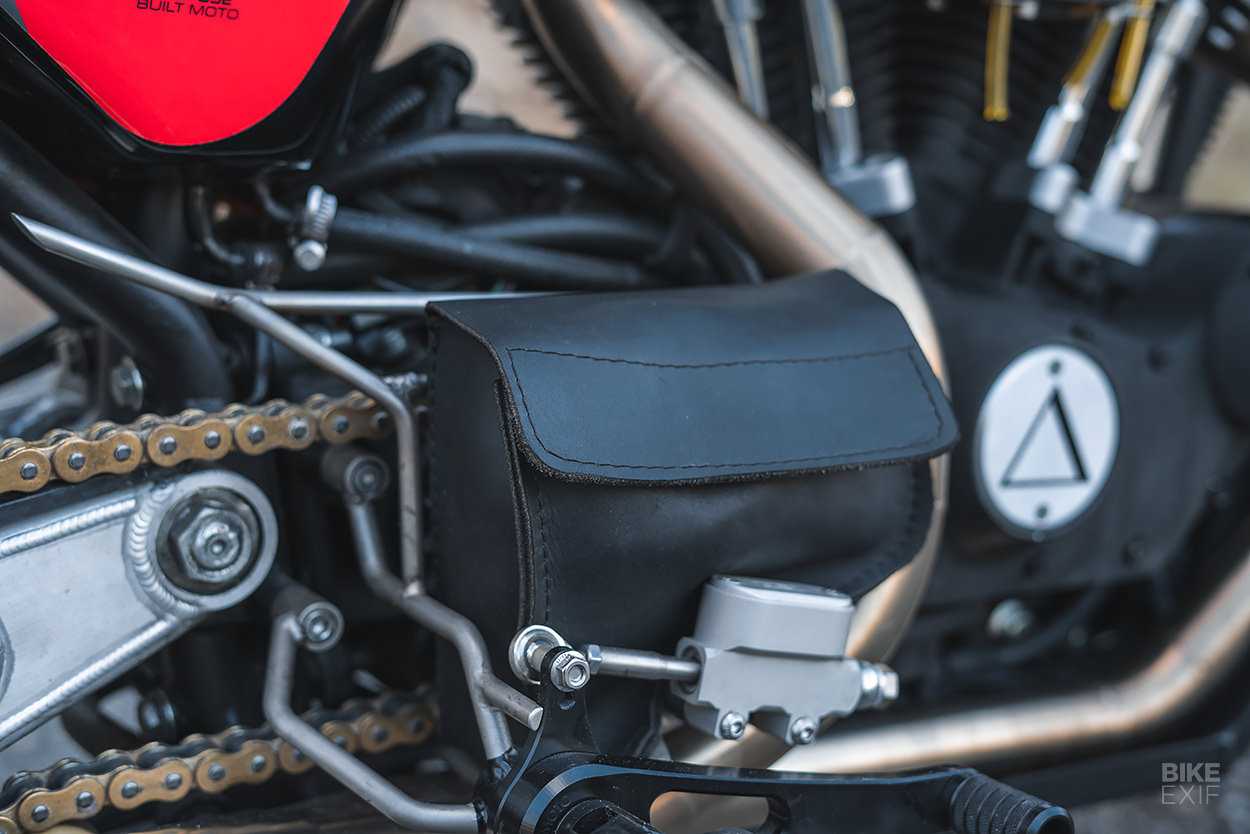 Purpose Built Moto’s latest ride is one of the more dirt-focused Scramblers we’ve seen—and it’s designed to be ridden. The bars and the seat pan are rubber mounted to reduce fatigue, and there’s room for a tool kit, easy access to the electronics behind the battery box cover and even a space for an onboard air compressor. “Some might think it’s a little gimmicky,” Tom says, “but it’s actually really handy when you ride off the beach and back onto the bitumen.”

That’s right, the owner is planning on tackling some proper off-road rides, one of which will be the Mackay Moto Beach race. 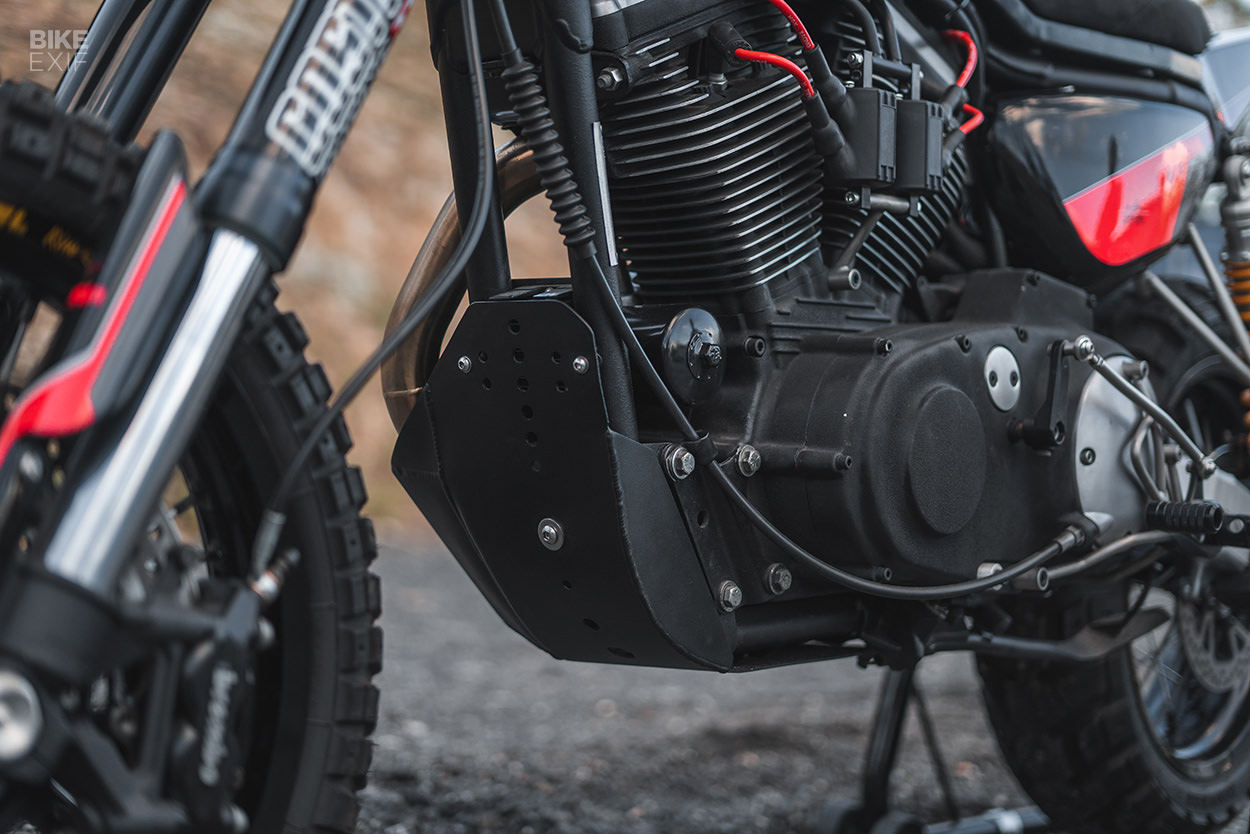 “Our second iteration of the Adventure Sportster design is something I’m really happy to see evolve,” Tom says. “Informed by real world experience adventuring on my own Sportster, I can say I’ve made some big leaps and bounds in the way the bike rides.”

We can only imagine. A 447 lbs, 75 hp Sportster that looks this damn good and is set up for off-road riding must be an absolute hoot to ride. 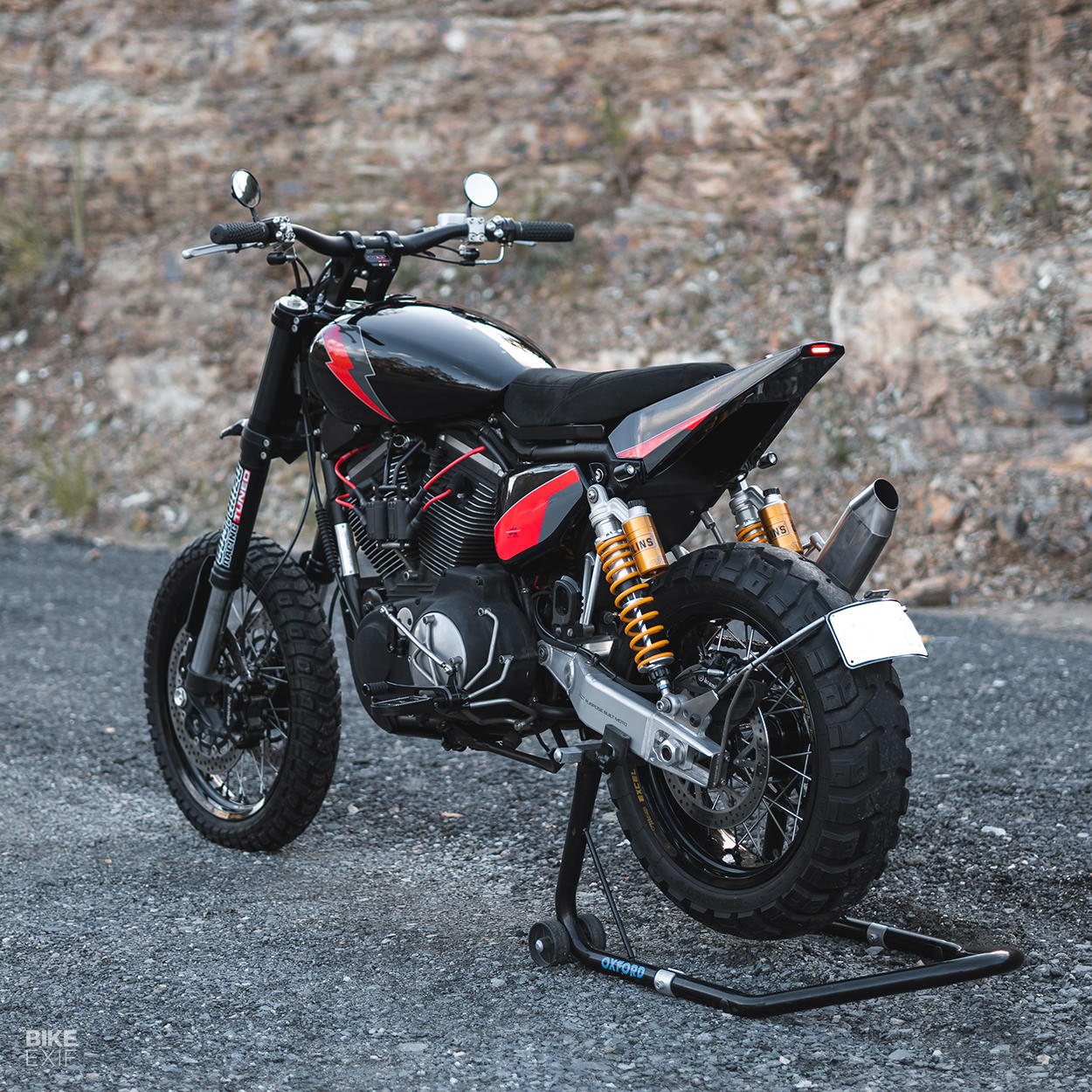