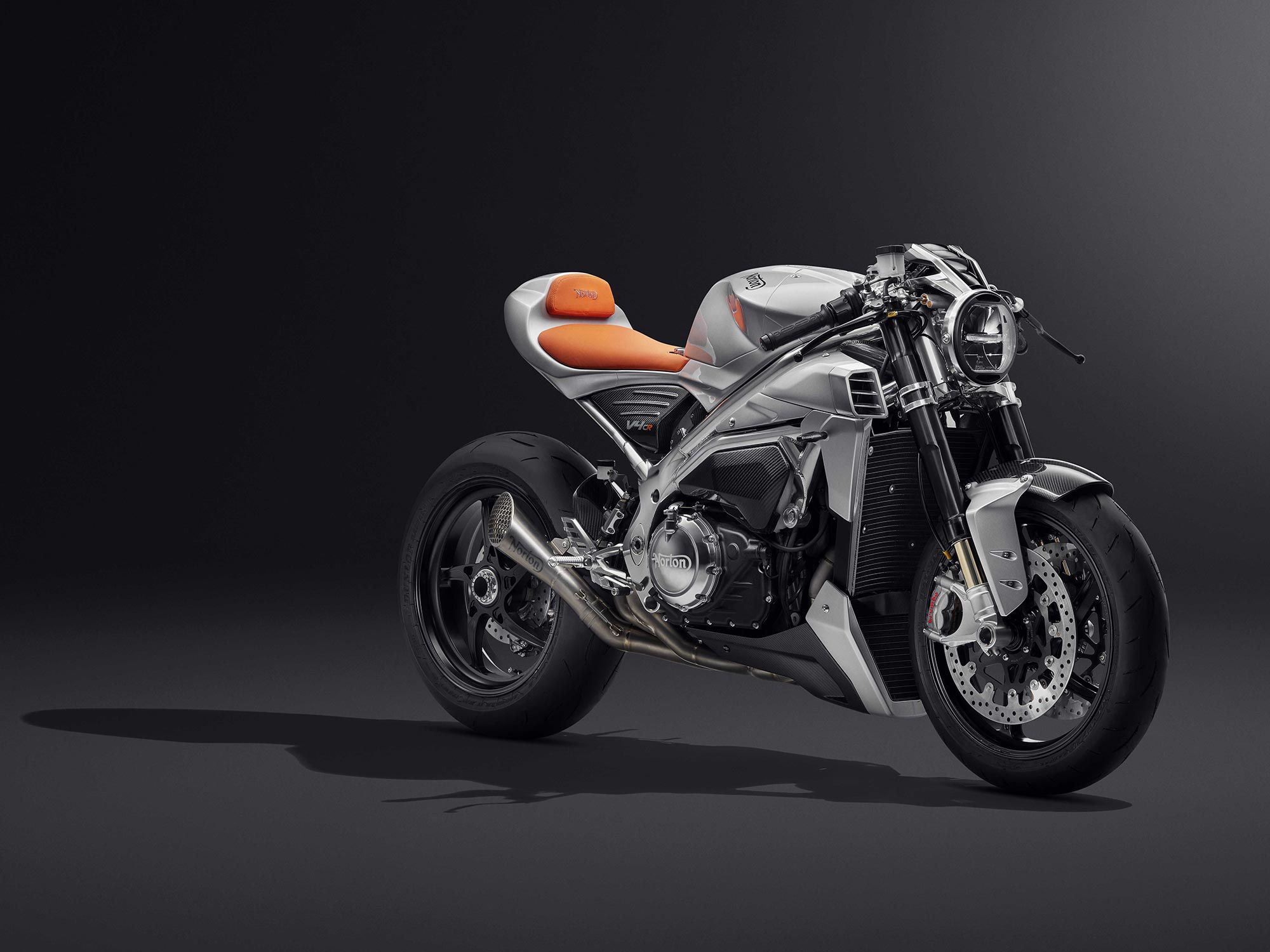 Under its new TVS ownership, Norton is pushing to bring production up to speed while developing a range of bikes that will put the company on firm footing into the future—and the V4CR you’re looking at is likely to be one of those machines.

Although officially only a prototype at the moment, it’s clear there’s a strong market for high-powered naked models so Norton is virtually certain to push the V4CR into production hot on the heels of the redeveloped V4SV superbike it’s based on. In case the complex tale of Norton’s V4 has passed you by, the superbike was originally revealed in 2016 as the V4SS, with a claimed 200 hp from a purpose-developed, 72-degree 1,200cc V-4. It took another two years before a trickle of handmade bikes started to be delivered to customers, and then that iteration of Norton folded at the start of 2020 among acrimony and scandal over missing pensions funds. Indian motorcycle-making giant TVS snapped up the brand name and various other assets, relaunching Norton as a new company. It has since discovered a litany of faults with the V4SS, leading to the bike being redeveloped into the newly revealed V4SV, with power cut to 185 hp and a host of technical changes to allow it to meet emissions rules and achieve the firm’s reliability targets. 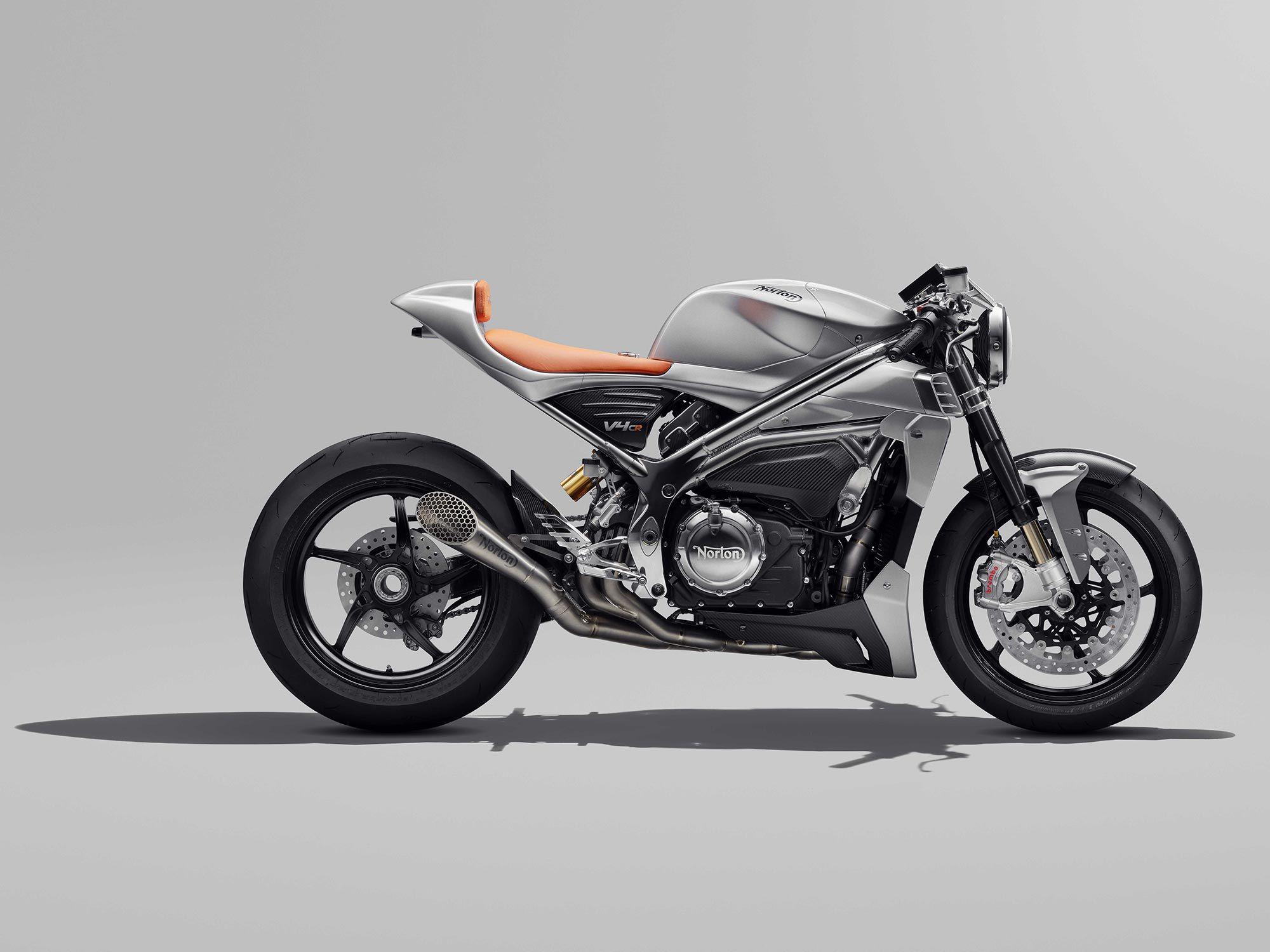 The prototype retains the bones of the 1,200cc superbike, but covers it with retro-inspired cafe bodywork. (Norton Motorcycle/)

The V4CR takes the bones of the V4SV but throws out the original bodywork in favor of a retro-inspired cafe racer look, with a circular LED headlight mounted below a minimalist cowling leading up to a TFT instrument panel that’s repositioned to sit on the top yoke. Small air intake ducts and radiator cowls replace the superbike’s side panels, and a new bellypan hides the exhausts and lower radiator edges.

All that bodywork is carbon fiber, as is the fuel tank, which is carried over unchanged from the V4SV superbike. At the back, the seat unit looks similar to the V4SV’s but it’s actually shorter; there’s clearly no intention to provide for passengers here. Underneath it, the alloy subframe is also shortened.

The chassis, like the engine, comes straight from the V4SV. It’s a TIG-welded tubular aluminum design, carrying Öhlins suspension and a single-sided swingarm. The Brembo brakes and Oz Racing forged alloy wheels are also directly from the stock superbike. 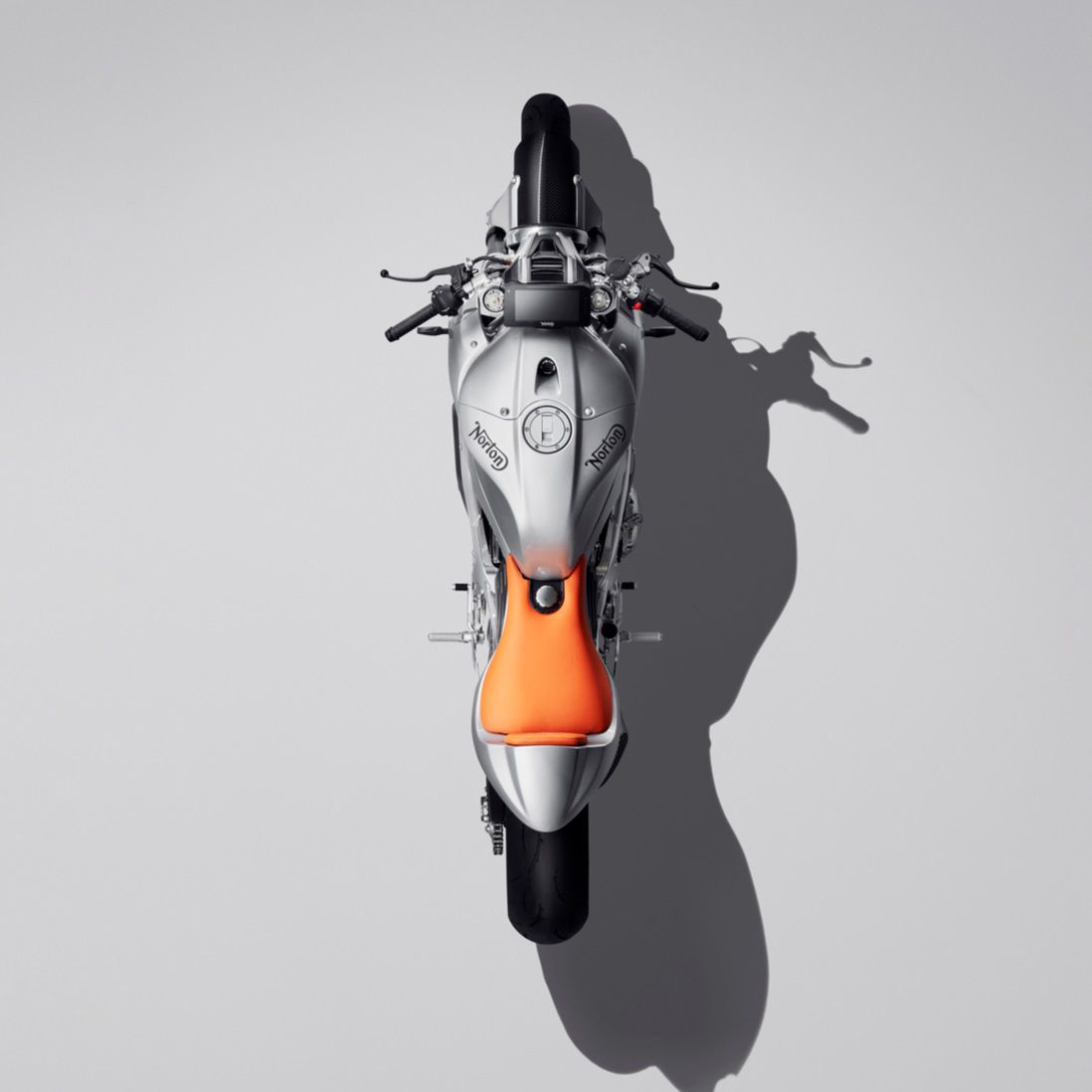 The carbon fiber tank is carried over to the prototype, as are the clip-ons and rearsets of the V-4 superbike, but the shorter seat rides atop a shortened subframe. (Norton Motorcycle/)

Unlike most of its rivals, such as the Ducati Streetfighter V4, the Norton V4CR doesn’t opt for wide, straight bars, instead retaining the clip-ons and rearset pegs of the V4SV superbike. That might not bode well for comfort, but it gives the bike the all-important cafe racer stance.

At the moment, the V4CR—which makes its public debut at the Motorcycle Live show in the UK this month—is still a prototype, so detailed specifications haven’t been finalized. However, Norton appears to be committed to bringing it to showrooms, saying that, like the V4SV, the V4CR will be offered in two color schemes—the Manx Silver seen in these images and a dark, bare carbon finish. If the firm follows the same pattern as on the superbike, the carbon model may also gain carbon BST wheels instead of the Oz forged alloys.

The chassis and engine are straight from the V4SV, with Öhlins suspension, a single-sided swingarm, and Brembo brakes also reappearing on the V4CR. (Norton Motorcycle/)