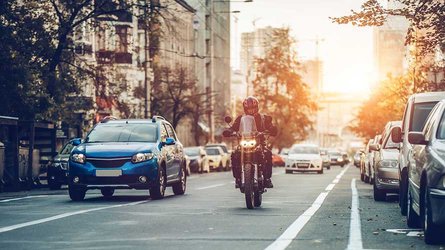 On September 8, 2021, New York governor Kathy Hochul announced the signing of new legislation to establish a 2035 zero-emissions goal for the state. According to the text of the bill that the governor signed into law, all new passenger cars and trucks sold in New York would need to meet zero-emissions requirements by 2035.

Additionally, new off-road vehicles and equipment sold within the state must meet zero-emissions requirements by 2035, as well. Medium- and heavy-duty vehicle sales have a slightly longer deadline, set at 2045. At the same time, the governor also directed the state’s Department of Environmental Conservation to release a regulation proposal to reduce air pollution from trucks, which will also accelerate zero-emission truck sales to increase momentum toward meeting these goals.

As written, the law does not specifically mention motorcycles, scooters, or other two- or three-wheeled vehicles as of September 13, 2021. RideApart reached out to the governor’s office to request clarification surrounding any potential motorcycle-related emissions legislation, and will update this piece if and when we hear back.

Legislation to meet emissions targets at a country level, or even at the European Union level, is something we’re seeing more and more in recent time. As the effects of climate change become all but impossible to deny, it’s no wonder that various legislative bodies are taking action. Individual states within the U.S. are another matter, though. So far, New York and California are the only two states to have taken zero-emissions targets into their own hands.

“New York is implementing the nation’s most aggressive plan to reduce the greenhouse gas emissions affecting our climate and to reach our ambitious goals, we must reduce emissions from the transportation sector, currently the largest source of the state’s climate pollution,” said Governor Hochul in a statement.

“The new law and regulation mark a critical milestone in our efforts and will further advance the transition to clean electric vehicles, while helping to reduce emissions in communities that have been overburdened by pollution from cars and trucks for decades,” she added.

As other similar laws in other jurisdictions have been written, New York’s law will not impact existing combustion vehicles that were sold prior to the deadline. The law as currently written only applies to sales of new vehicles from 2035.

No Surprises To Report With Suzuki’s 2022 Street Lineup