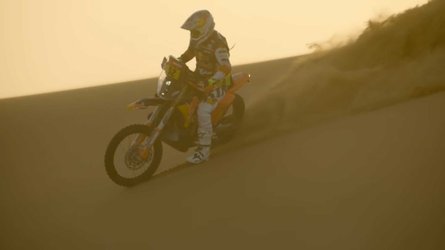 It’s December 16, 2021, and you know what that means? Dakar 2022 is just around the corner, that’s what! If you want to get to know more about what to expect from this year’s rally, Red Bull has put together a web series to get everyone amped up about what’s to come during the next edition of one of the true landmark racing events on the world stage.

From January 1 through January 14, 2022, participants in the 2022 Dakar Rally will participate in a range of regular and special stages designed to test all of their mettle, no matter what type of vehicle they’re piloting. Bikes, trucks, side-by-sides, and more will line up at the starting line to test their strength, resolve, resiliency, and skills against the desert courses in Saudi Arabia.

In the weeks leading up to the event, the Red Bull Rally YouTube channel is posting new episodes of its series, From Dawn Till Dust: Discover Dakar, shedding light on different aspects of the event. At the time of writing on December 16, 2021, a total of four episodes have been released so far.

The first one introduces several competitors in the 2022 event, although many will be familiar if you’ve been paying attention to Dakar in previous years. From Kevin Benavides to Cyril Despres to Carlos Sainz, the event attracts the best of the best, year after year.

Episode two gives more insight into the mechanical challenges competitors face, as well as the brilliant mechanics and engineers that keep them going throughout the event. It’s a grueling event for participants, for sure, but just think of everything their vehicles go through—and what it takes to keep up if you’re on the technical team.

The fourth episode gives an overview of navigation, which is one of the principal challenges of any good rally raid event, including and especially Dakar. Just because you have a general overview of the course map doesn’t mean you know how you’re going to complete each stage. To keep the challenge fairly even for all competitors within a class, they all receive their roll logs at the same time, so no one should have an appreciable advantage as far as that’s concerned.

Are you excited about Dakar 2022? It’s hard to believe that it’s just about two weeks away, but that time should fly by since we hear there are some holidays between now and then.