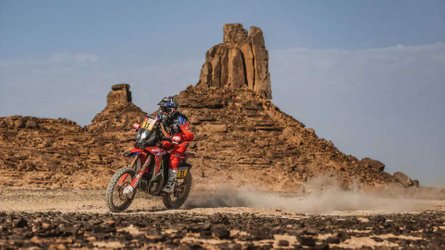 Less sand, more mountains was the order of the day for Stage Nine of the 2022 Dakar Rally. The 287-kilometer (just over 178 miles) special stage around Wadi Ad-Dawasir was meant to provide a bit of a respite after the last couple of grueling days. Overall length was 491 kilometers, or just over 305 miles—still plenty for competitors to sink their teeth into.

KTM’s Matthias Walkner finished just two minutes and six seconds slower than Nacho Cornejo’s stage-winning pace, which earned him fourth place on the stage. However, when combined with all the other times, that particular time was still good enough to propel Walkner back into the lead for the 2022 Dakar Rally motorbike category overall.

With Stage Nine complete, there are only a handful of stages left to play for, and math is still on many riders’ sides if they want to win the 2022 Dakar Rally motorbike category outright. Current second-place-holder Sam Sunderland’s overall time is a mere two minutes and 12 seconds behind the leader, Walkner—and you have to go all the way down to seventh place to find someone who’s much more than 10 minutes off the pace. Incidentally, the current seventh placeholder overall is, in fact, Nacho Cornejo, who’s hot off of two stage wins. In other words, he’s definitely not out of the running just yet.

The thing is, in the Dakar Rally, 10 minutes simply isn’t very much time at all. It’s an event where a bad day can see you losing an hour or more as you get to grips with your navigation and finding your way—or even more, should you face a particularly stiff penalty from the stewards. Three stages remain in the 2022 Dakar Rally, so there are plenty of kilometers left for storylines to unfold.