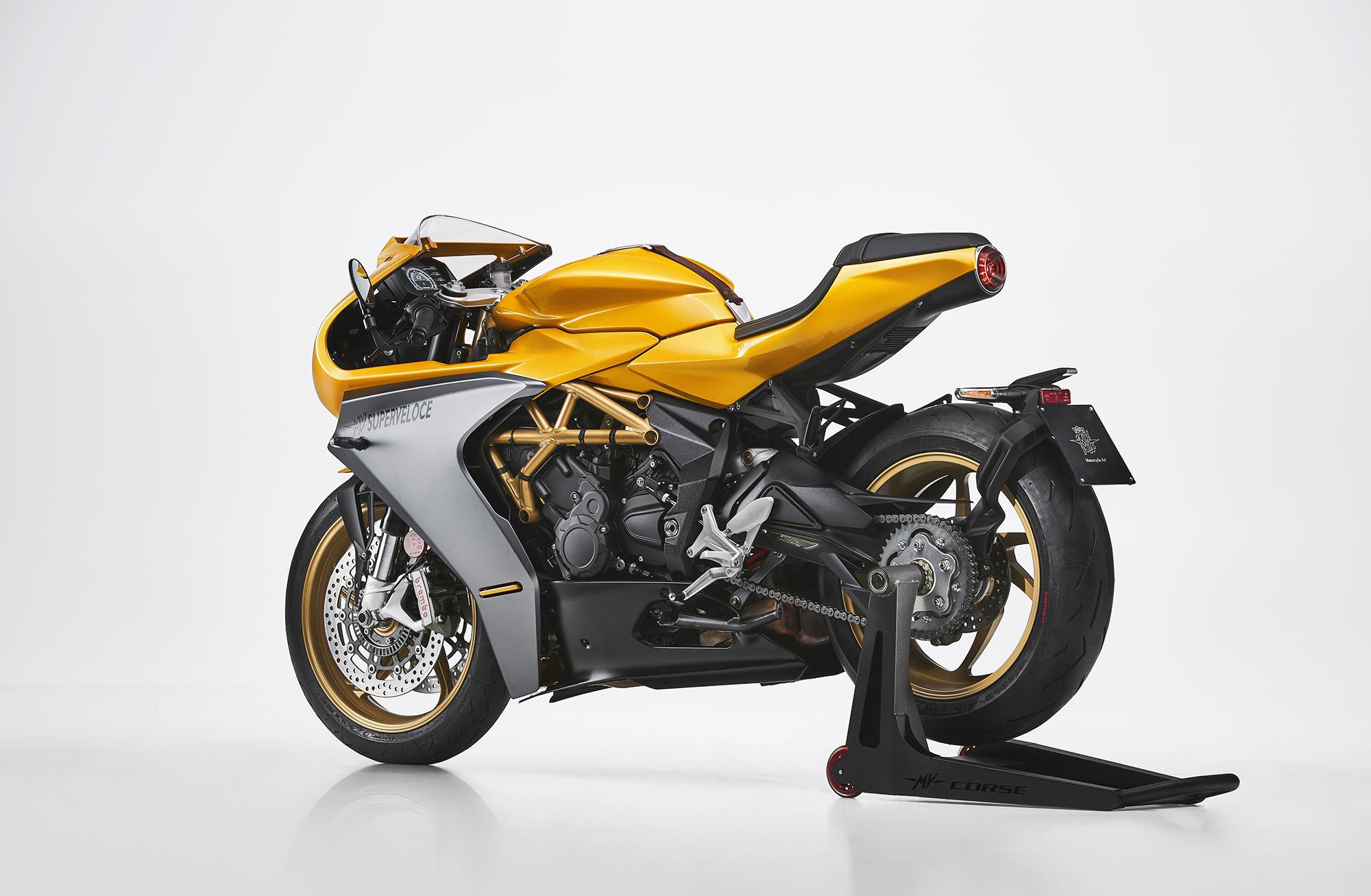 Less than 12 months ago I had the opportunity to test a first-production MV Agusta Superveloce 800. In its standard configuration, that bike in its silver and red color scheme was undeniably elegant, classic, and dynamic. The Superveloce made a highly emotional visual impression, gratifying to both the traditionalist and the modernist, and that alone is an appreciable virtue. The 2020 edition was also offered in a black/dark gray color combination. Now, for 2021, the silver/red paint scheme is available unchanged, while a yellow/gray version replaces last year’s black/gray; the S model is available only in Surreal White with a flash of gold. 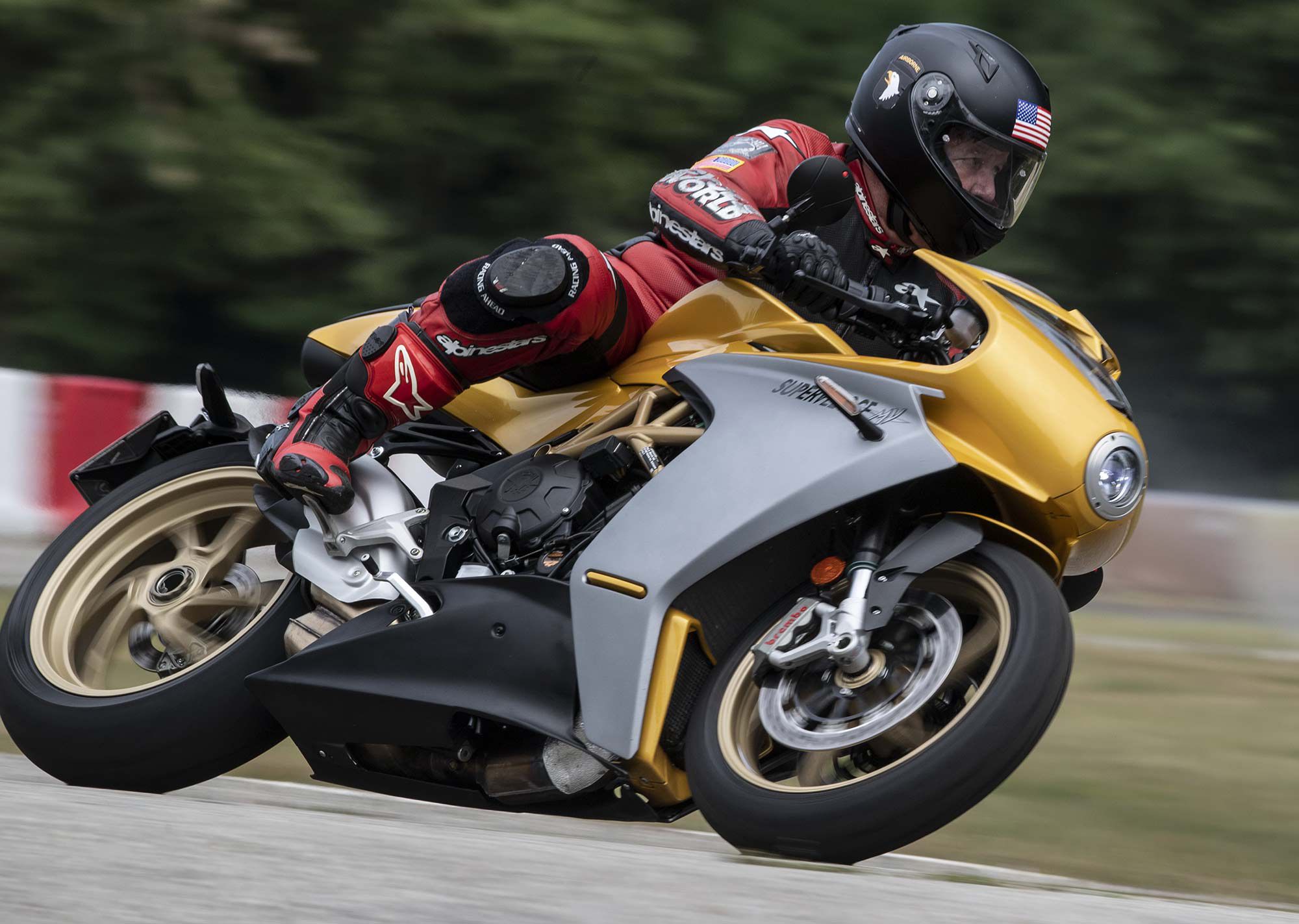 Our testbike sported the yellow/gray paint, and, honestly, compared to the official pictures, in person it looks rather dull, and its gold frame just makes things worse. In order to gain Euro 5 compliance, the bike now has an exhaust similar to that used on the latest MV Agusta 800 three; on that bike the exhaust is appropriate, but on the sleek, elegant Superveloce it looks like a poke in the eye, worse than it did on the 2021 Brutale 800. The racing kit MV developed for the Superveloce S includes an Arrow exhaust system that looks much neater and is more appropriate to the Superveloce’s personality. It probably doesn’t meet Euro 5 specs, but the original exhaust system is due for a redesign anyway.

So that’s the bad news. But there’s plenty of good news too: The rest of the bike is one of the most refined pieces of motorcycling engineering available, with no corners cut anywhere in terms of style or execution. Going into this 2021 Superveloce test the critical point was the engine, since last year’s bike clearly needed refinement, especially the engine’s integrated injection-ignition system and its ECU. 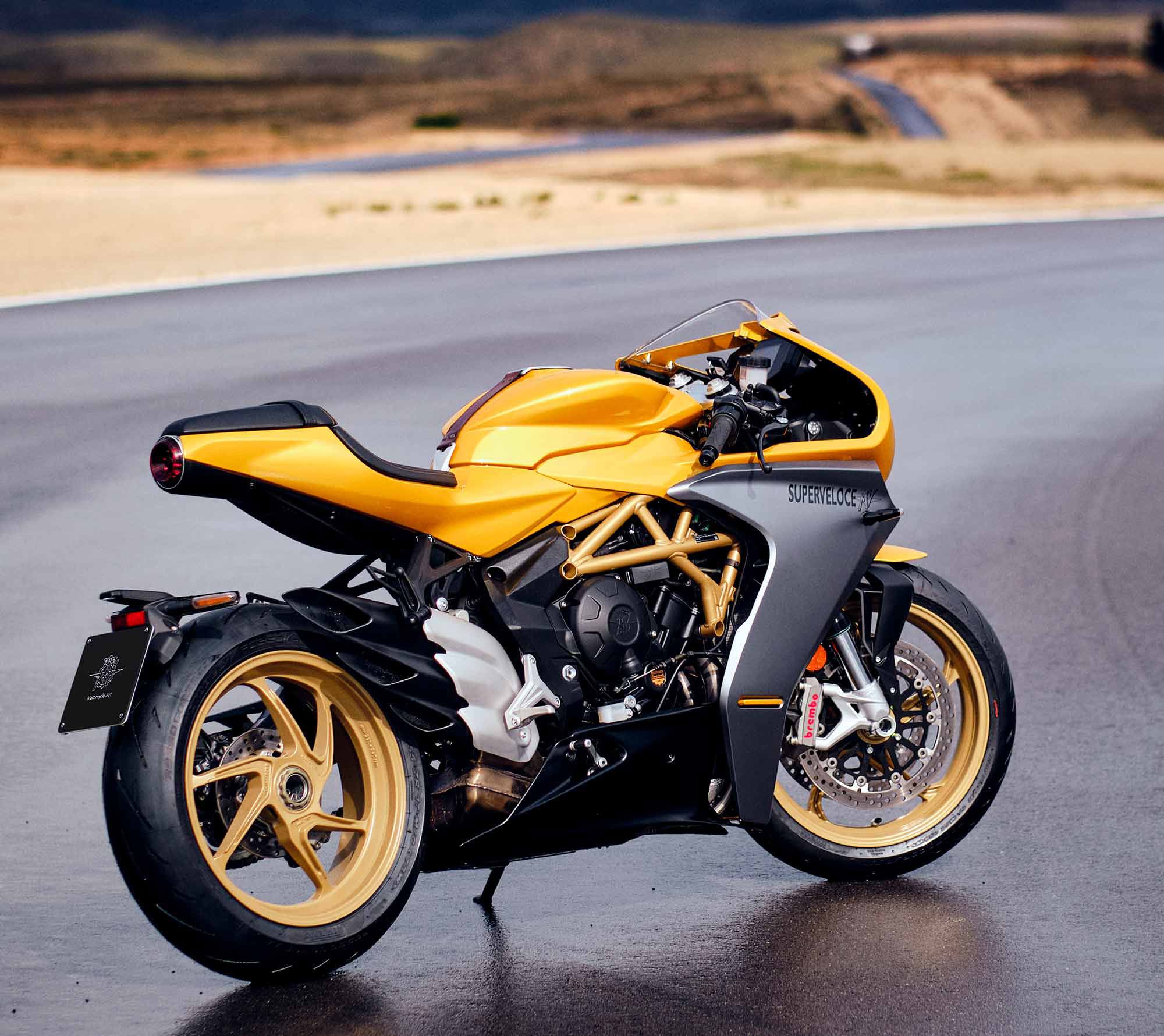 The tiny round headlight echoes the small round rear taillight, and stands in contrast to the bike’s angular tank and fairing. Overall minimalism is a Superveloce trademark. (MV Agusta/)

To quickly recap our experience with the previous version: When cold, the Euro 4-homologated engine coughed and displayed poor response below 3,000–3,500 rpm. This was exacerbated by a tall final-drive ratio intended to fully exploit the bike’s sleek aerodynamics and really make it “superveloce,” with a top-speed potential in the region of 160 mph. The situation cleared up higher in the rev range, and the engine generated a substantial 148 hp at 13,000 rpm, along with 65 pound-feet of torque at 10,600 rpm. Chief Project Engineer Brian Gillen promised that MV Agusta’s technical team was hard at work, and that the Euro 5 version would iron out the low-end response problems. 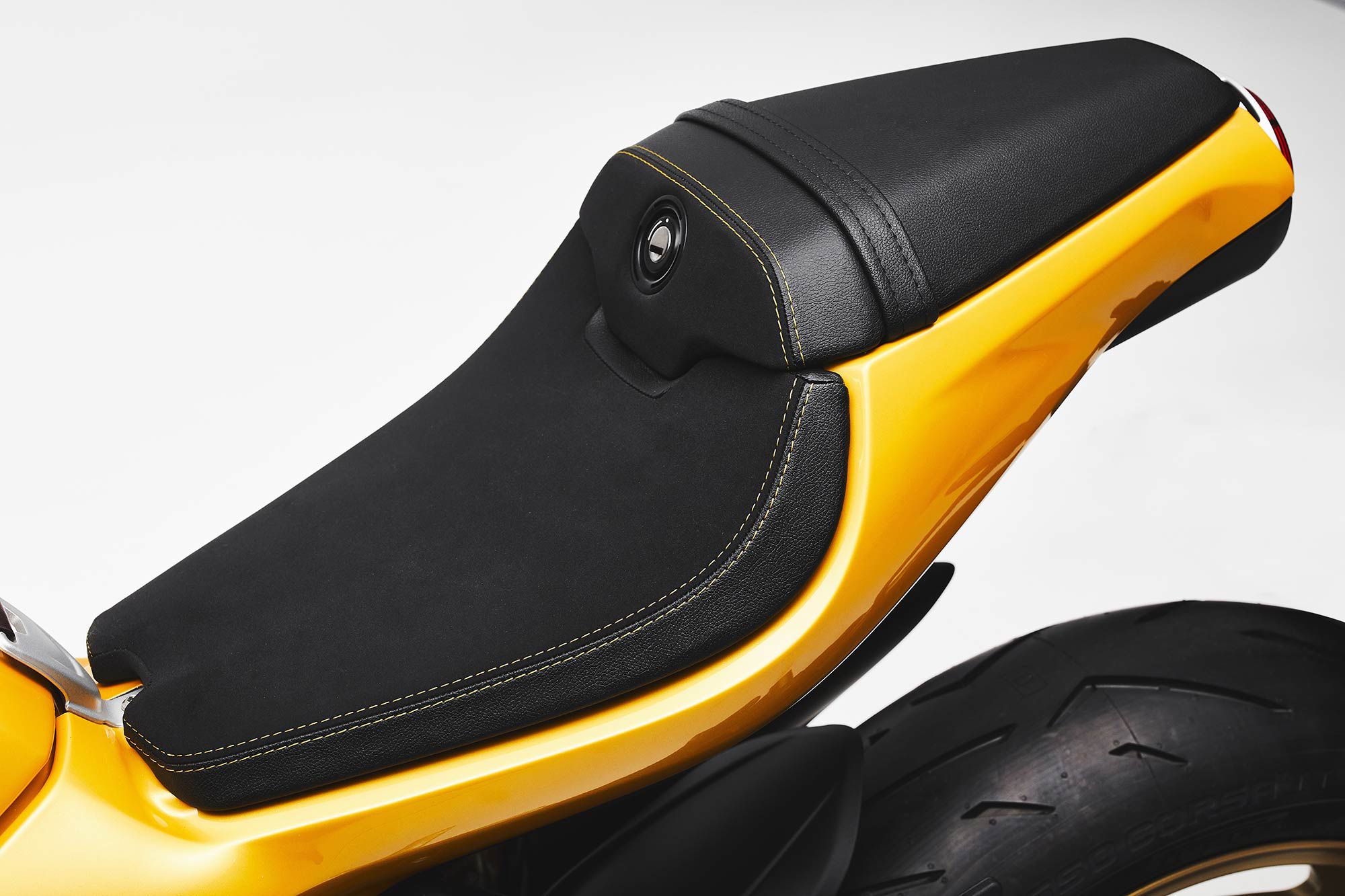 Tell your passenger to hang on tight—the Superveloce is really a rider-only bike, though it does come with passenger pegs and a vestigial passenger seat. (MV Agusta/)

He was telling the truth. The 2021 bike’s vastly revised engine has resolved all the old issues. It’s totally smooth and solidly responsive from 3,000 rpm onward, with great progression from 5,500 to the engine’s peak of 13,000 rpm. It delivers a claimed 147 hp, just one less than the previous edition, while meeting the stricter Euro 5 emissions criteria. Dr. Gillen and his technical team deserve great recognition for this, especially considering that the engine is the same basic unit (bore and stroke remain 79.0mm x 54.3mm), with no displacement increase to bump up performance.

You can see some real improvement in the torque curve by looking in two places: First, the throttle response is clean, progressive, and strong. Even more telling, the same 65 pound-feet of peak torque comes in at 10,100 rpm, 500 revs below the previous version. This in turn means that peak torque and peak power are separated by a wide 2,900-rpm band, a mark of great flexibility for an engine that has a specific power output approaching 200 hp/liter. The new torque curve is already clocking 46.5 pound-feet at just 4,000 rpm. 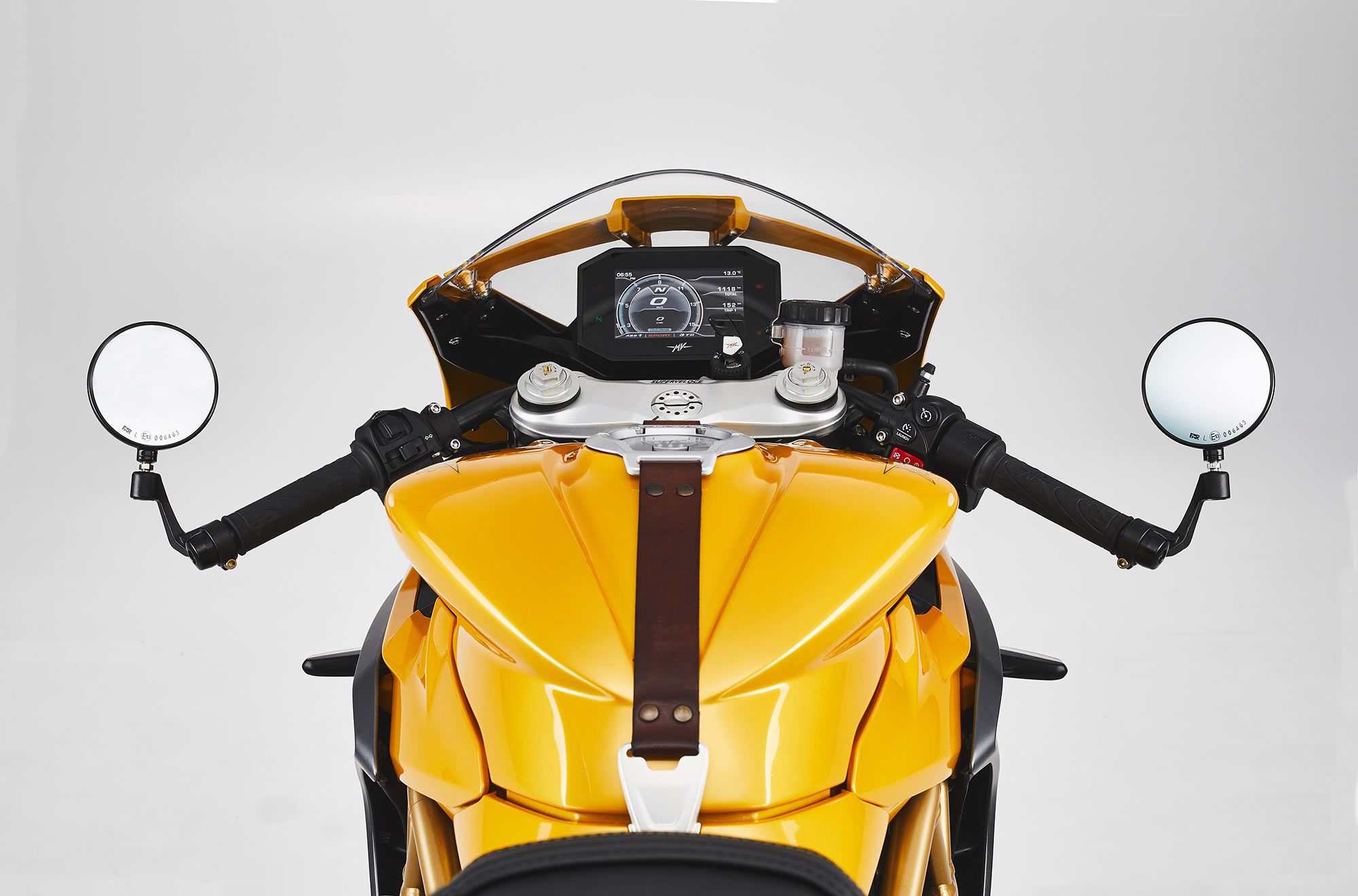 The Superveloce’s cockpit is elegant in its simplicity. As spare as any racebike—and downright minimalistic compared to a MotoGP machine—it belies the technical sophistication this MV offers. (MV Agusta/)

People often complain about tightening emissions standards and declining performance, but in the case of the 2021 Superveloce, Euro 5 has given us a better-performing bike, hands down. Part of that is because there’s also been a concerted effort to cut mechanical, inertial, and frictional losses within the engine, increasing its inherent efficiency. A new injection system is pressurized 0.5 bar higher, which improves both fuel atomization and combustion. The bike also fits a more potent catalytic converter along with the larger exhaust system previously mentioned. Managing the fuel-injection system is the latest MVICS 2.1 ECU, while all of this oversquare engine’s other vital functions are controlled by an Eldon Nemo ECU.

The Superveloce shares a chassis with MV’s other 2021 triples: a classic steel-tube trellis frame which joins to a large pair of aluminum plates that clamp the rear engine mounts and locate the spindle for the single-sided swingarm. These massive new plates improve the chassis’ torsional rigidity and vastly improve the rear section’s stiffness. In practice, this translates into even more stability, and lets a rider exploit the nimbleness provided by the bike’s compact 54.7-inch wheelbase and the steep steering head (23.5 degrees) and 3.9-inch trail.

Along with the ECU upgrades, the Superveloce gets a new six-axis IMU e-Novia inertial platform. Electronic rider aids are courtesy of the Continental MK 100 ABS system, which includes cornering braking, ABS, and lean-angle-sensitive traction control. 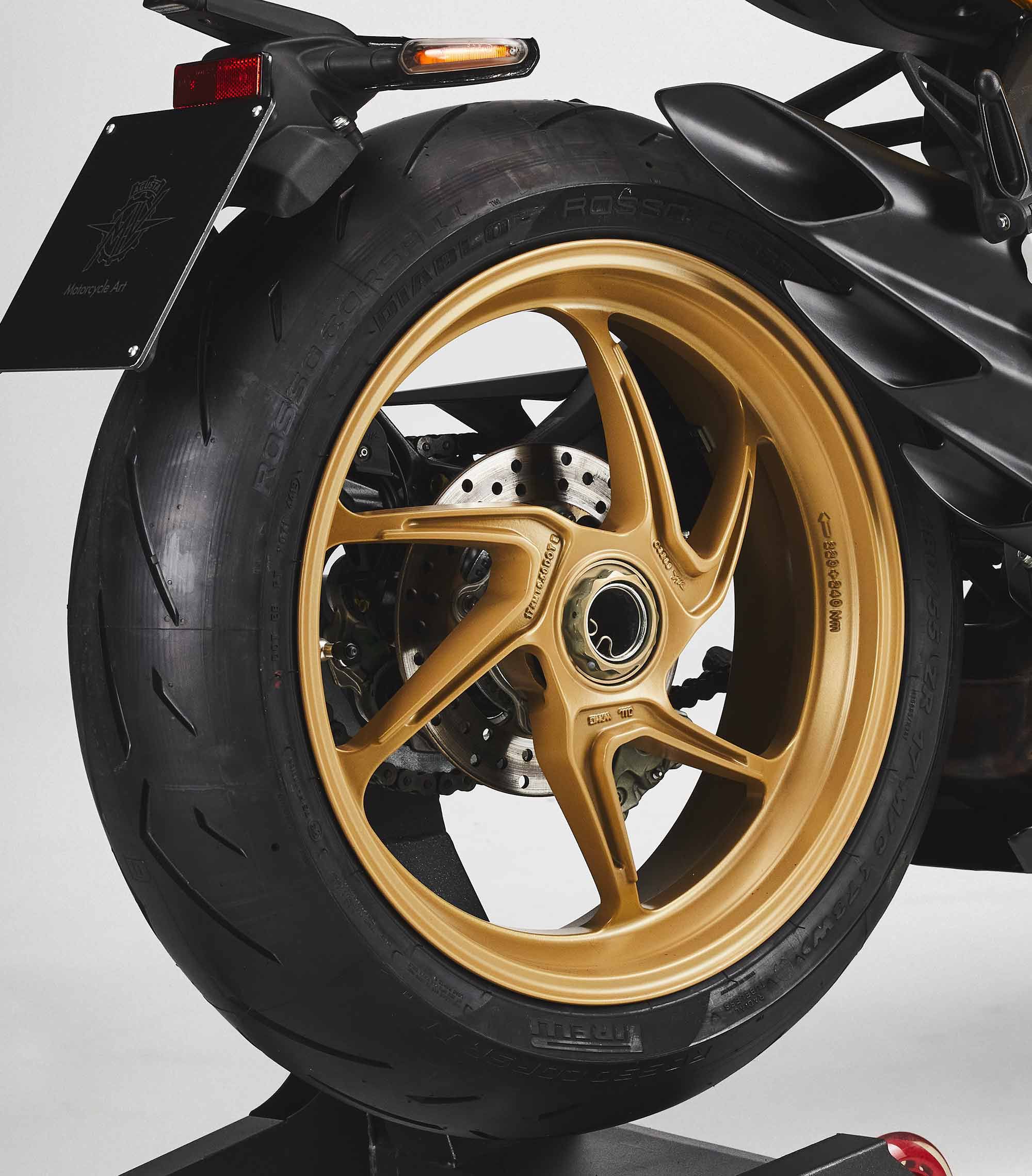 New Pirelli Diablo Rosso IV tires front and rear mount to gold wheels. And the Superveloce’s single-sided swingarm shows that wheel off in a visually impressive manner on the right side. (MV Agusta/)

Our Superveloce testbike was equipped with Pirelli Diablo Rosso IV tires, which provided an interesting opportunity. These new Pirelli radials represent a drastic evolution of the previous Diablo Rosso III tires in terms of wet-surface grip and stability. In the dry and at high speed, the Diablo Rosso IV returned superior steering feel and response, especially under very hard braking. 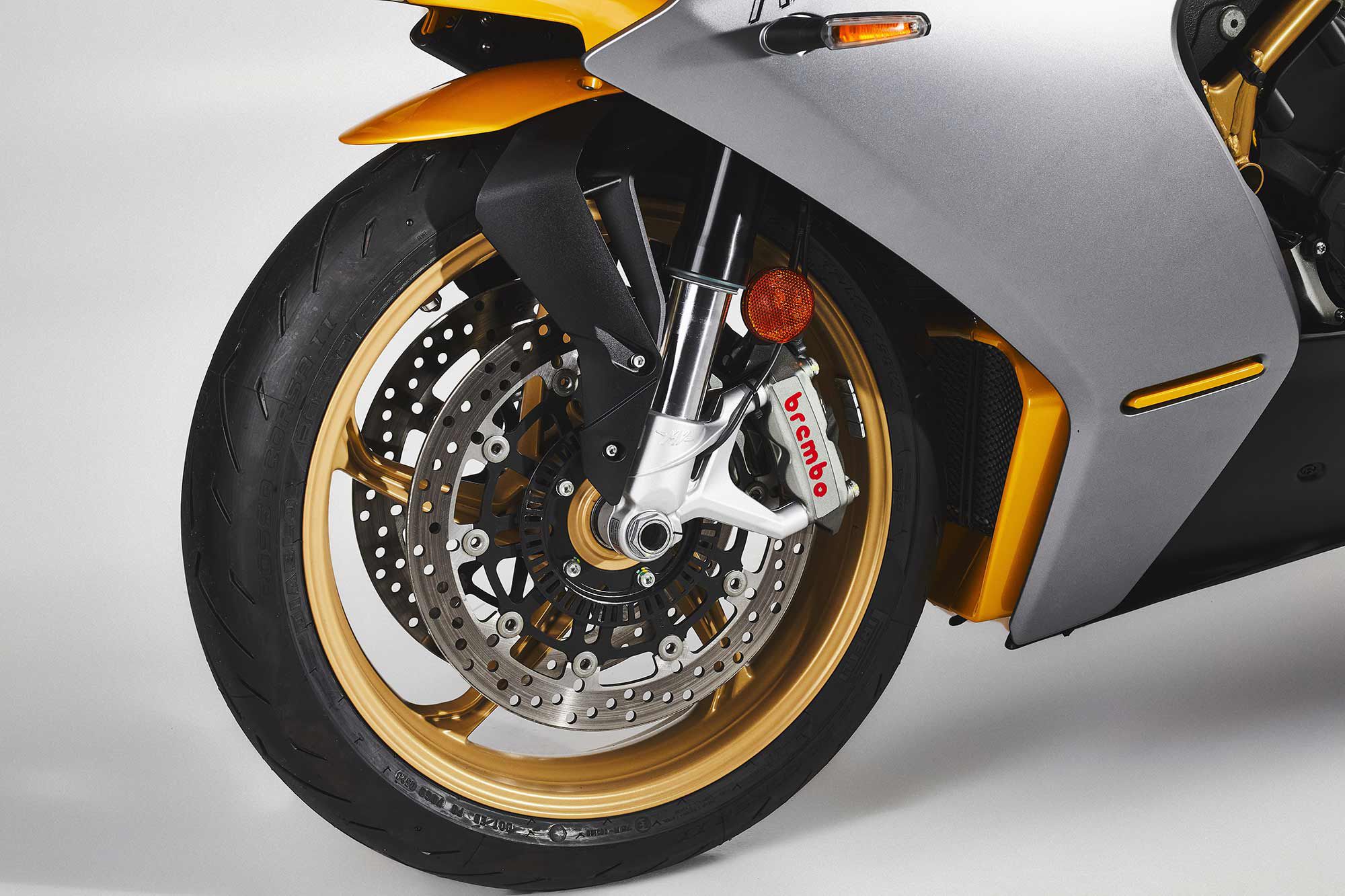 Wet conditions during our track testing made it difficult to really discover the Superveloce’s maximum performance potential and lean angles. No worries; when the weather cleared, I just took the Superveloce out on the nearest highway and opened it up. The exhaust note is deeper than the Brutale 800′s, and the final gearing is taller. Yet the engine pulls to its 13,000-rpm redline in every gear except sixth. Although it may sound pretty wild, given the very short 54.3mm stroke, the mean piston speed remains within safe limits at 77.2 feet/second, even at peak power. And the balancer shaft does an excellent job keeping the engine adequately smooth even at those high revs. The new sensor included in the electronically assisted gearbox ensures precise and very fast no-clutch shifting both up and down. 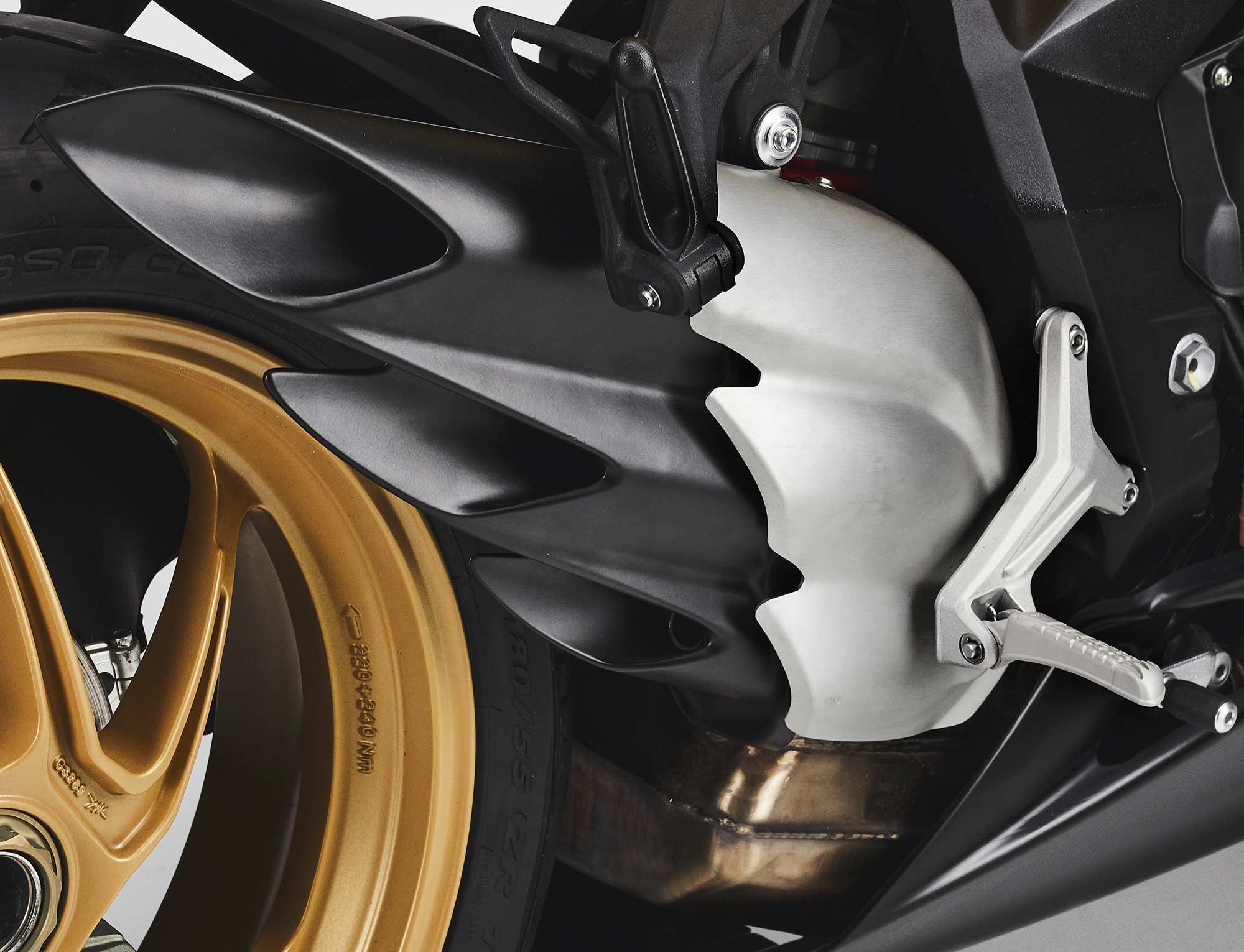 We’re not a big fan of the Superveloce’s exhaust system, but it’s part of a Euro 5-spec package that improves the engine’s overall performance—and that we like. (MV Agusta/)

On the open highway the Superveloce was very impressive, strongly running through the gears past 150 mph in total stability. Even when I let the revs drop down to 4,000 rpm in sixth, the bike pulled smoothly, demonstrating again that the revised powerplant is the real strong point of the 2021 Superveloce project.

The Superveloce’s riding posture is definitely biased toward the track, and on the highway or open road, that’s a little demanding. These ergos most likely stem from the fact that the Superveloce has never had a clearly defined niche. Think of it: With its F3, MV Agusta has its racing tradition perfectly covered and provides a great trackday bike. The Superveloce is elegant and sleek and offers great style, and its power delivery and chassis are perfect for a fast ride on any kind of road or on the highway. But a more relaxed riding posture would suit this role better. In particular the pegs should be set lower. The seat is perfectly comfortable and the tank is correctly dimensioned and shaped for an easy reach to the sporty clip-ons, but even there, I’d like to ride a version with the bars attached above the upper triple clamp. 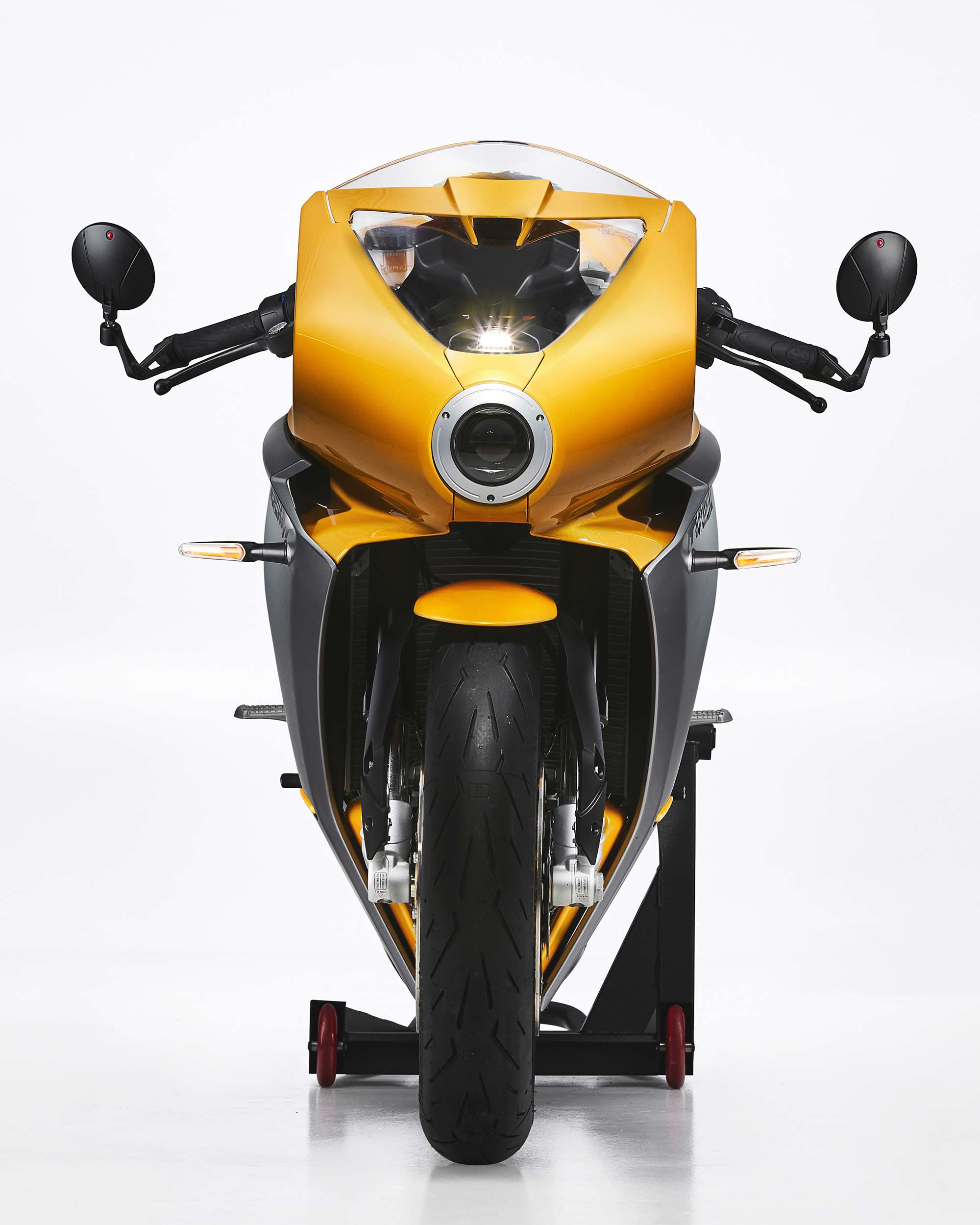 Note the aero “wing” bridging the fairing over the windshield. It’s plainly evident that the Superveloce is all about “<i>veloce</i>.” (MV Agusta/)

The Superveloce is the two-wheeled translation of the classic Italian Grand Touring car, very elegant, very agile, and very fast. Just add a touch of additional creature comfort and the Superveloce will be one of the most versatile bikes in the class. 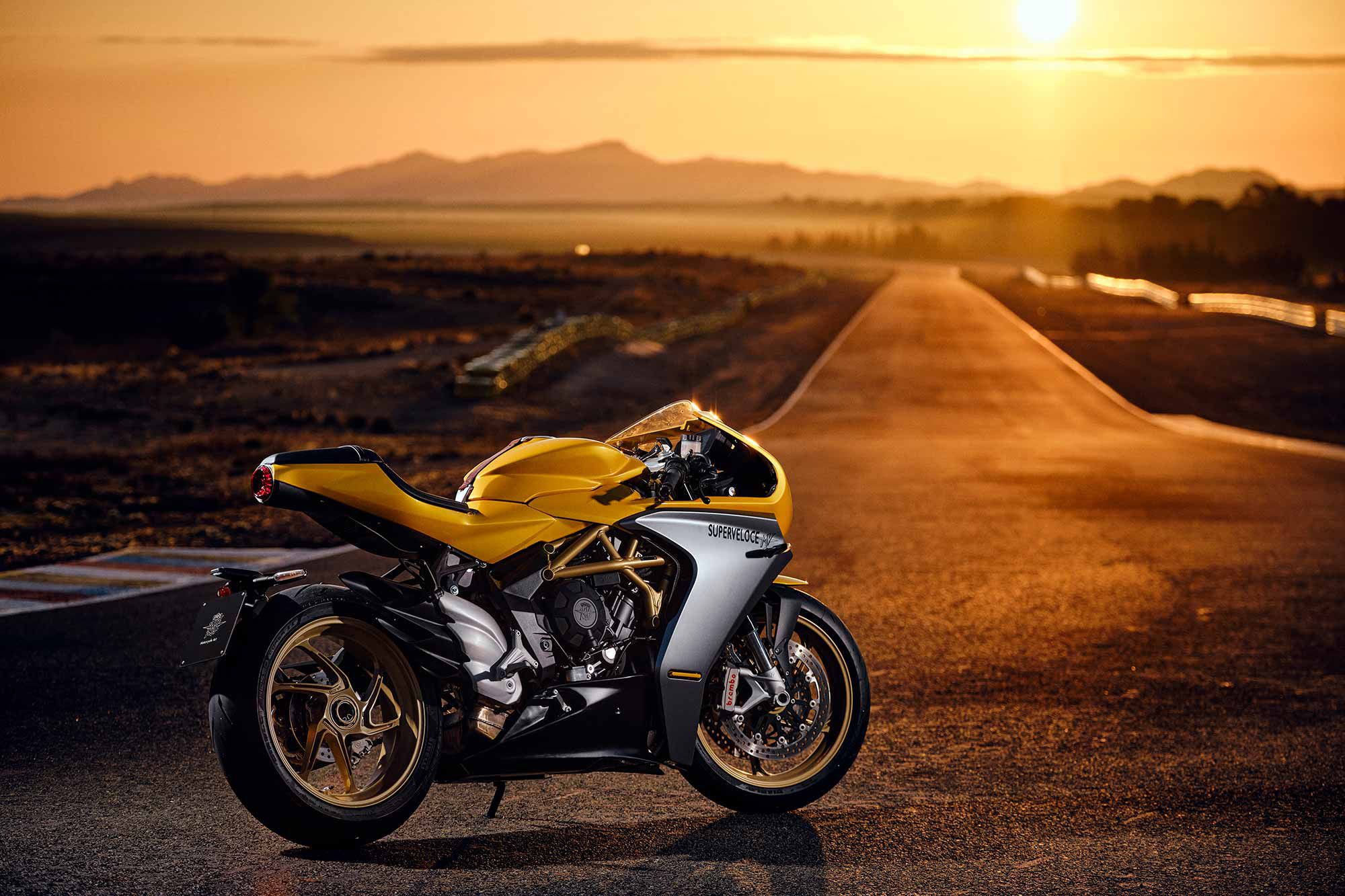 As it is, the Superveloce begs to be ridden on long, inviting roads. The handling and power delivery are just right for GT riding—the riding position, well, that can use a little improvement. (MV Agusta/)