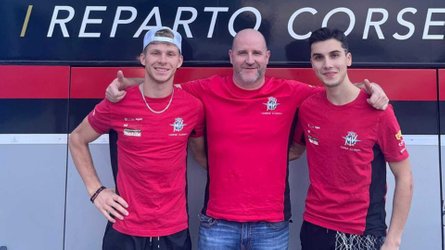 The World Supersport Championship (WSSP) is set for a big change in 2022. With Japanese four-cylinder Supersports like Yamaha’s R6 no longer available for use on public roads, the series needed to adjust its rules to accommodate the new class of middleweights on the market. As a result, teams can now field European twins and triples like the KTM 890 Duke R, Triumph Street Triple 765 RS, or Ducati Panigale V2.

For MV Agusta, the new regulations allow the F3 800 to line up alongside the Yamaha R6s and Kawasaki ZX-6Rs on the grid. Returning to the MV Agusta Reparto Corse team in 2022, Niki Tuuli will jump from the race-bred F3 675 to the 800 variant in 2022.

“It’s great that MV found trust in me. It’s easy to continue with the familiar brand, and the new bike makes the job even more interesting,” noted Tuuli. “The first tests we did felt really good. The new engine will give you what you need for optimizing riding. You don’t need to push with such a limit in every opening and bend. The engine has more power with low rpm, which makes it easier to ride the bike. It will allow me to use potentially tighter lines and hope making it easier to overtake. Various parts were also tested, and I think we can definitely build a really good and competitive package for next year.”

Tuuli hopes that package will help him add to his eight WorldSSP podiums and one victory. While Finnish rider was MV’s lone man in previous years, the Italian squad will add WSS300 sensation Bahattin Sofuoglu in 2022. As the nephew of five-time WSSP champ Kenan Sofuoglu, the rookie rider has a lot to prove. After capturing four podiums and two wins in WSS300 last season, the Turkish rider hopes to bring that momentum to his days with the MV Agusta team.

“I feel proud of myself to have concluded my experience in the WSS300,” admitted Sofuoglu. “I had a great time and I learned a lot. Moving forward, I’m super excited to compete in the WorldSSP Challenge, especially having been given the privilege to be a part of this project with MV Agusta Reparto Corse. In this period, we are working and testing in preparation for my future with the team. I would like to thank the team principal Andrea Quadranti and my mentor Kenan for believing in me and giving me this opportunity. I am determined to do the best I can. Looking forward to a very successful future with MV Agusta.”

What To Include In Your Home Tool Box