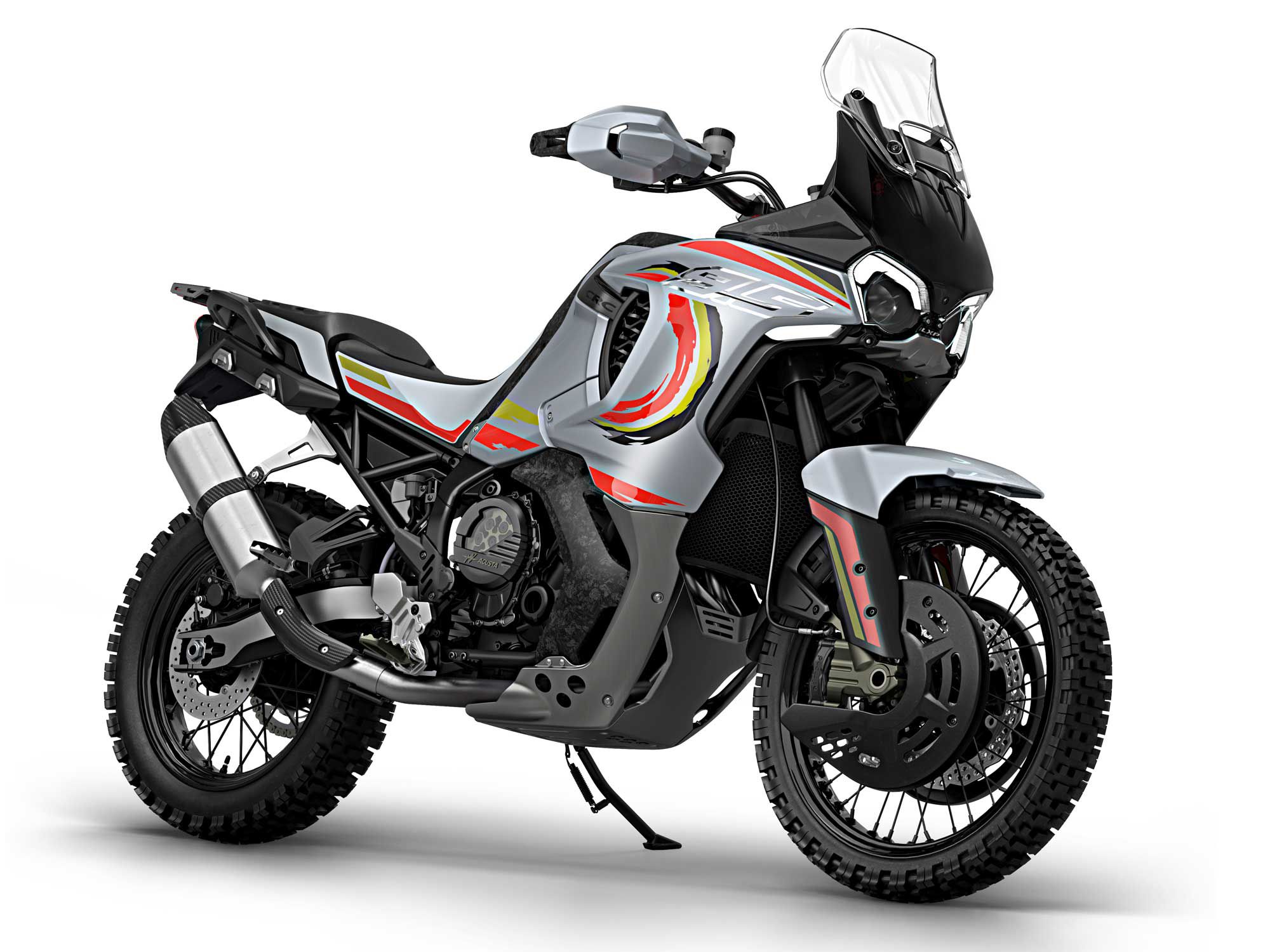 Lucky Explorer 9.5 is the bigger of the new MV Agusta adventure bikes—with a 930cc version of the firm’s three-cylinder engine. (MV Agusta/)

MV Agusta is finally getting into the adventure-bike scene by reviving the Lucky Explorer name that graced rally-replica versions of the old Cagiva Elefant and showing near-production prototypes for not one but two new models that will use the title.

Although MV isn’t currently committing to production dates or complete, final specifications for the new Lucky Explorer models, the firm is opening up the project so it can develop the bikes without the veil of secrecy that normally surrounds new machines. Official word is that the Lucky Explorers will be 2022 models.

While the brand’s decision to enter the adventure market comes as no surprise—MV Agusta has been open about its intentions for some time—the Lucky Explorer project is actually more significant than that. It includes not one but two models, both representing significant moves for MV. The larger machine, dubbed Lucky Explorer 9.5, is the first to appear with a new 931cc derivative of the 800cc triple that currently powers the majority of MV’s range, including the F3, Brutale 800, Dragster 800, Turismo Veloce, and Superveloce. The second bike, the Lucky Explorer 5.5, is the first fruit of MV Agusta’s partnership with Chinese firm Qianjiang, owner of the Benelli and QJMotor brands, and features a 550cc parallel twin that’s likely to be the basis of a whole range of entry-level MVs in the future. 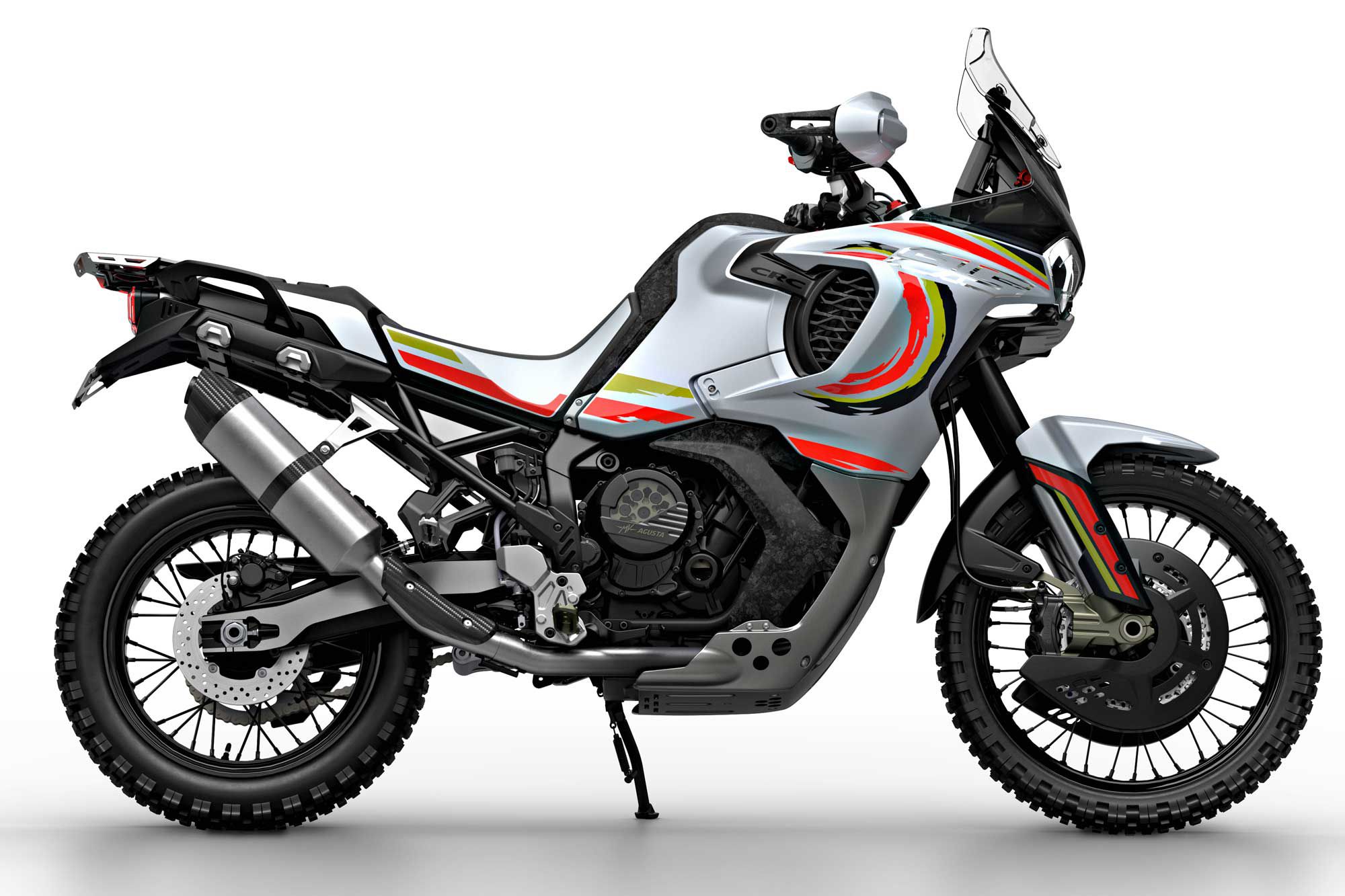 Let’s start with the Lucky Explorer 9.5. Although still in prototype stages, the bike’s styling and most of its technical details are now set in stone. Visually, the link to the old Dakar racers of the ‘80s and early ‘90s is clear to see, with a shape that—like Ducati’s upcoming DesertX, which is certain to be the Lucky Explorer 9.5′s closest rival—eschews the cliched beak used by so many adventure models in favor of a more conventional profile.

The DesertX similarities run as far as the engine capacity too, with both bikes falling into the 950 category. Ducati will use its 937cc Testastretta V-twin, MV has developed a 930cc version of its existing triple. Although we’ve yet to see the final DesertX, even the paintwork on the two models is expected to be similar. Ducati’s 2019 Scrambler DesertX concept also adopted Lucky Strike-inspired colors, because both the Ducati and the MV Agusta see the old Cagiva Elefant Dakar racers as those models’ ancestors. Back in the ‘80s and early ‘90s, Ducati, Cagiva, and the then-dormant MV Agusta brand were owned by the Castiglioni family. The Cagiva Elefant was Ducati-engined. Now MV and Ducati are deadly rivals, but both have a claim to the Cagiva’s Dakar Rally heritage. 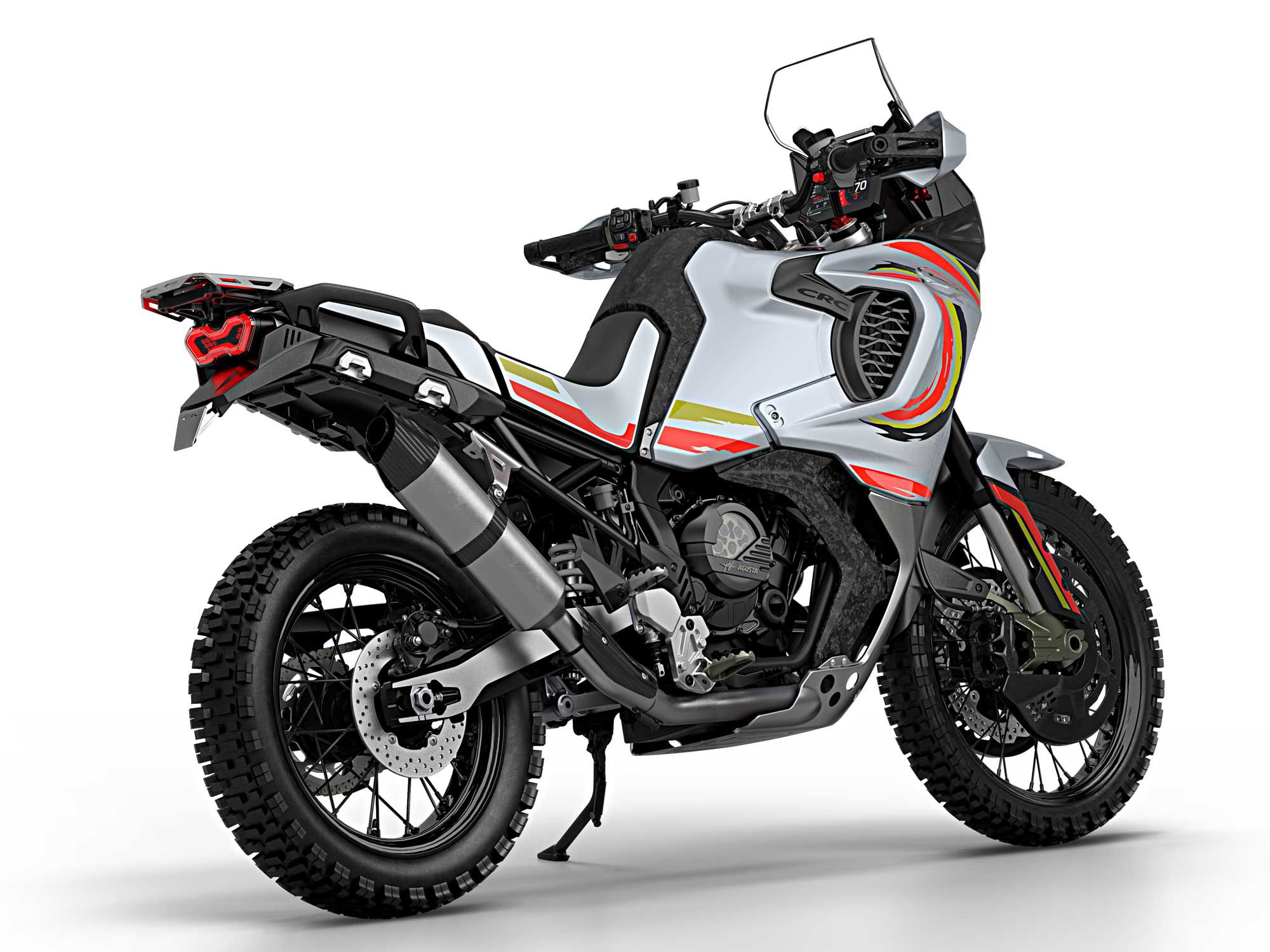 High-end materials including forged carbon fiber are visible on the 9.5, as well as practical touches like the quick-release luggage brackets. (MV Agusta/)

To uprate the 800 triple to 930cc, MV has increased both the bore and stroke, requiring a new crankshaft and a new cylinder head. As with the smaller displacement engine, the crank is a 120-degree design that rotates backward to reduce the bike’s overall gyroscopic effect and sharpen handling—a trick most modern GP bikes have long since adopted. With a 12.5:1 compression ratio, down from, 13.3:1 on the 800, the engine is tuned for torque rather than absolute power, although its peak—a claimed 123 hp at 10,000 rpm, along with 75 pound-feet of torque at 7,000 rpm—is still more than most similarly sized rivals can muster.

The bike’s tech includes a 7-inch TFT screen with the usual Bluetooth connections for smartphones, and less usually there will be the option of a Rekluse automatic clutch and a semi-automatic, electronically actuated transmission. Given the high proportion of Honda Africa Twins sold with the firm’s DCT semi-auto, that’s a smart move.

The engine sits in a steel frame made of a combination of forged and extruded sections, with an aluminum dual-sided swingarm and proper, off-road-suited wheels, 21 inches at the front and 18 at the rear, with a fairly long 1,580mm (62.2 inches) wheelbase between them. 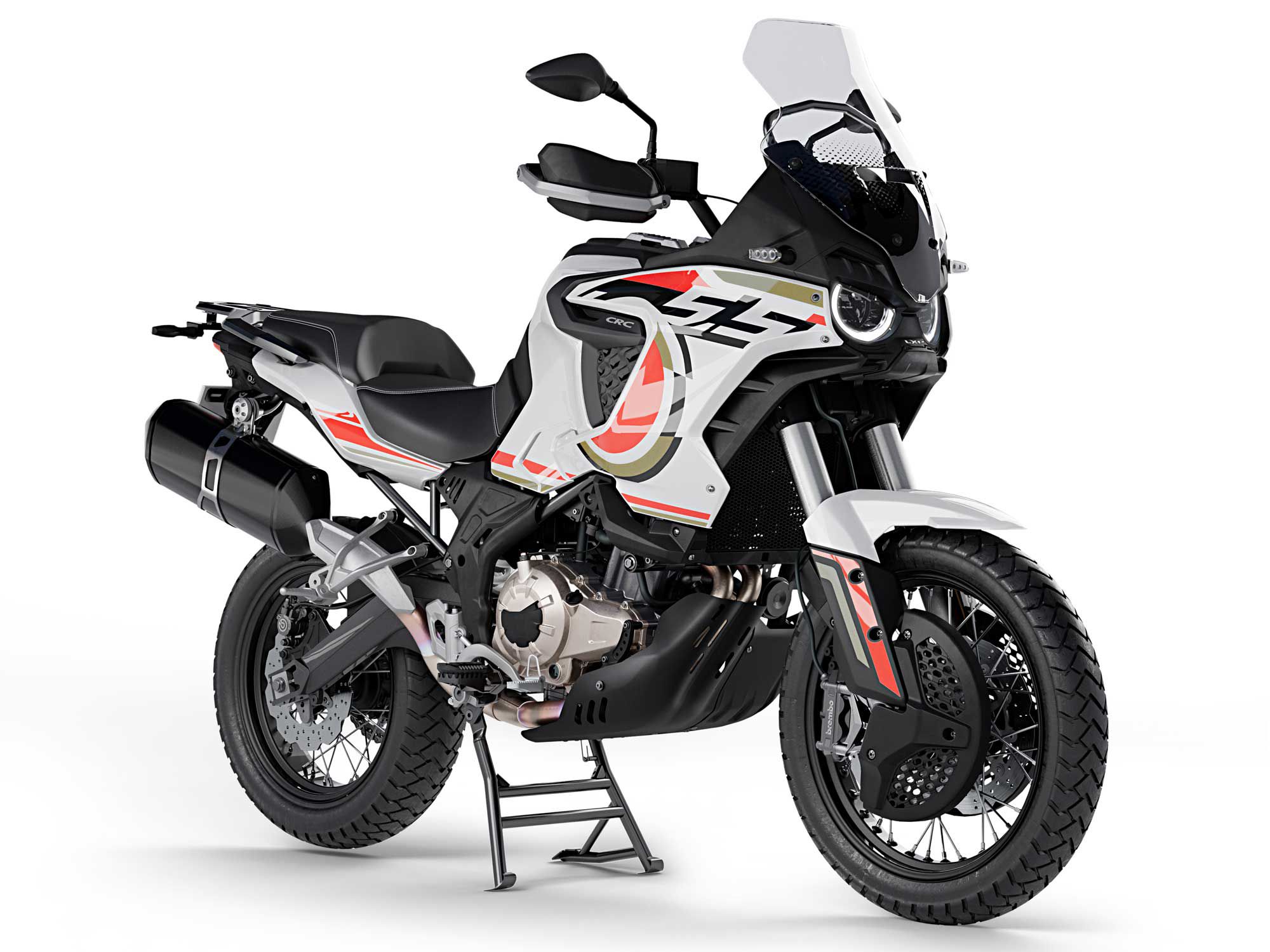 Stepping down to the Lucky Explorer 5.5—a bike that MV says has been developed “in close collaboration” with Qianjiang in China—there are fewer specs to go on at the moment but it’s clear that the prototype borrows a large number of its parts from the QJMotor SRT 500.

That bike, in turn, uses the engine and frame from the Benelli TRK 502, since both companies are subsidiaries of Qianjiang, and while the Benelli isn’t well known on this side of the Atlantic it’s been one of Italy’s bestselling bikes for the last couple of years.

MV’s version gets a larger-capacity, 550cc derivative of that parallel-twin engine, with a 70.5mm bore and 71mm stroke compared to the 69mm x 66.8mm of the Benelli and QJMotor 500s, mounted in what appears to be the same steel frame used by both QJMotor and Benelli. The alloy swingarm, meanwhile, looks to be the same as the Chinese-market QJMotor SRT 500.

As befits an MV Agusta, other components look to be high spec, with Brembo brakes clearly on display, although final details of the bike have yet to be announced. The styling, too, is a quantum leap forward from the gawky-looking Benelli TRK 502 or the sleeker but somewhat derivative QJMotor SRT 500.

With the Lucky Explorer project now out in the open, MV Agusta has launched a dedicated website—luckyexplorerproject.com—and an @luckyexplorer.official Instagram channel to chart the bikes’ development toward production in the not-too-distant future.