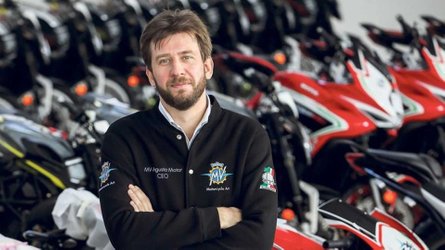 MV Agusta stole the spotlight at EICMA 2021 with its Lucky Explorer 5.5 and 9.5 adventure bike concepts. While MV developed the mid-size option alongside China’s QJ Motors, the 9.5 will contend the increasingly cluttered heavy middleweight ADV segment. Unfortunately, the model won’t arrive until spring 2023, but the Schiranna firm has other plans for the adventurer’s liquid-cooled, 931cc, inline-triple engine in the meantime.

“The 950 product that we’re building is state-of-the-art,” Sardarov revealed. “The 950 as an engine will also migrate into other platforms too, in a different spec. This is an adventure-spec engine, and you will see a more sporty, naked—there will be different variations.

In Lucky Explorer 9.5 guise, the new 931cc triple pumps out 121.3 horsepower and 75.2 lb-ft of torque. While the Turismo Veloce platform may benefit from a similar tune, we fully expect the mill to gain more top-end power in the Superveloce and F3 lineups.

The reason MV Agusta can transplant its new triple into so many different models comes down to the engine’s frame and swingarm attachment points. By standardizing the mounting locations, the powerplant can show off its versatility in numerous models. However, Sardarov also revealed that the brand is developing an even more powerful engine as well.

“We’re still working on one more high-performance platform that will come before electric,” Sardarov stated. “There are the 800s, 950s and then there is the next one. It will be over 1,000cc. We will show something every year and some of the projects we have started will take a long time, but by 2024-2025 you definitely will see very special machines rolling out of MV Agusta.”

Could we see the long-awaited return of the F4 superbike with the new 1,000cc+ engine? That answer is only 2-3 years away, but MV Agusta will keep us busy with new 950 variants while we eagerly wait.

What To Pack For A Hospital Birth