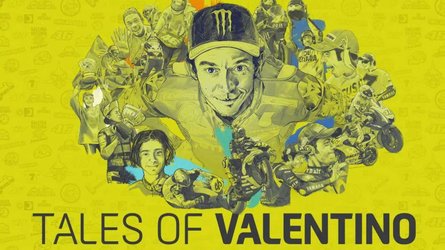 Valentino Rossi will be sorely missed when the 2022 MotoGP season gets underway. While the nine-time world champion will be a fixture in his Moto2 and MotoGP VR46 team paddocks, the fans will certainly remember The Doctor’s exploits on track.

To celebrate Rossi’s career-defining moments, MotoGP will release the nine-part Tales of Valentino video series in the lead-up to the 2022 season. From last-lap wins, dominant performances, and unlikely victories, Vale’s 26-year career has it all. The series will give fans a look behind the curtain with 30 exclusive interviews with all the parties involved.

The first episode examines the classic battle between Rossi and longtime Yamaha teammate Jorge Lorenzo at the Catalan Grand Prix in 2009. After a crash-riddled but ultimately successful rookie season in 2008, Lorenzo brought the fight to the then six-time MotoGP titleholder, and the bitter feud played out on and off track.

The two were teammates by name, but not by nature, and the rivalry led to some of the most intense battles on the circuit. Of course, with testimonials from Jorge Lorenzo, Yamaha Principal Lin Jarvis, then Yamaha Manager Davide Brivio, and the Doctor himself, the episode gives the viewer an in-depth glimpse into the bitter relationship between the two Yamaha men.

As ardent MotoGP fans know, the Catalunya 2009 was a battle between Vale and the number 99 from start to finish. However, in the last three laps, both Team Blue riders exchanged overtakes as they measured one another up for the final lap. Lorenzo led into the lap, but that didn’t stop Rossi from aggressive maneuvers throughout the final go-around. In the end, a miraculous last-corner move sealed the victory for The Doctor and cemented his legendary legacy.

Fortunately, that’s only one story in the Rossi saga, and MotoGP will release the next Tales of Valentino installment on January 5, 2022. The race series will follow up with a new episode every two days, as the 2022 season kick-off swiftly approaches.