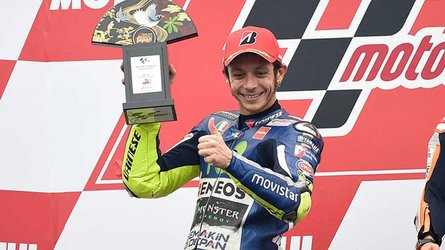 Many a MotoGP fan shed a tear when 9-time world champion Valentino Rossi hung up his leathers after 26 years in Grand Prix racing. Thanks to his unparalleled charisma, aggressive riding style, and humorous showmanship, The Doctor drew more fans to the sport than ever. Now, without Vale on the grid, MotoGP organizers are considering new ways to help the Rossi legend live on.

Of course, Vale’s VR46 outfit will enjoy its second year in the premier class ranks with Rossi’s half-brother Luca Marini and VR46 student Marco Bezzecchi both piloting Ducati’s in 2022. While The Doctor will support the team throughout the year, and inevitably show up in the MotoGP paddock, race organizing body Dorna wants Rossi’s presence to play a bigger role in the standings.

For that reason, MotoGP’s top brass is considering a trophy named after Valentino Rossi to be awarded to top performers in the top class. With riders already winning prizes for a podium finish and pole position(s), the organizers need to determine the metric by which to measure the Valentino Rossi trophy.

Based on leaked reports, Dorna has narrowed down the options to fast laps, overtaking, and pilot of the day. Throughout his 22-year MotoGP career, Rossi logged 76 fastest laps and leads all racers in the ranking. If Dorna chooses this route, it can either award the Vale trophy to the rider that records the fastest lap in each individual race or present the trophy to the rider that collects the most fastest laps over the season.

Overtaking was a specialty of the 7-time MotoGP champ, another option includes rewarding the rider that makes up the most positions throughout the season with the prize. On a similar note, Dorna is also considering the Rossi trophy for a potential Pilot of the Day award. Just like F1, MotoGP would ask viewers to vote on the best performance of the race. The popular vote would determine the winner of The Doctor’s award at the end of each round.

Unfortunately, Dorna hasn’t shown its hand when it comes to a potential Valentino Rossi trophy. With the first race of the 2022 season more than three months away, we may not hear a definitive answer for some time. However, any of the trophy options would be a great way to reward top-performing racers while honoring Vale’s legacy.

Would You Like To Get Your Hands On A Johann Zarco Moto2 Bike?