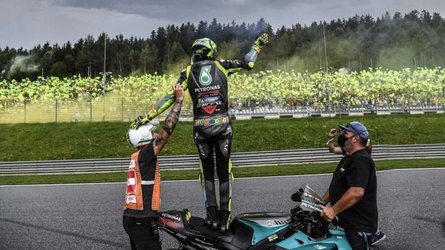 On August 5, 2021, Valentino Rossi sent shockwaves through all of motorsport when he announced his retirement from MotoGP. While the Doctor’s retirement was a long time coming, many also believed that he would race one final year under his new ARAMCO Racing Team VR46 squad. Unfortunately, Vale’s 2021 pace and results weren’t acceptable in his eyes, prompting him to move on to greener pastures following the season.

While number 46 has tumbled down the starting grid and the championship standings in recent years, he hasn’t lost his ardent fan base. From the Austrian Grand Prix to the Grand Prix of the Americas, the Rossi’s fan club has turned out in force. Even in the twilight of his career, the Doctor remains the most popular rider in MotoGP. With only three more stops left on his farewell tour, MotoGP isn’t wasting the opportunity to thank Rossi in the most authentic way possible—with fan-made videos.

Posted on October 2, 2021, via the official MotoGP Instagram handle, the campaign calls for Rossi fanatics to help say “Grazie to Vale” one last time. Users will need to film themselves in a 16:9 aspect ratio and in landscape orientation, but they are free to express what Valentino Rossi means to them as fans and to the sport as a whole.

After 26 years in Grand Prix racing, nine world championships, 199 podiums, and 115 wins, Vale has become the face of MotoGP for decades. Dominating the premier class between 2001-2009, the Doctor will go down as one of the greatest motorcycle racers of all time alongside Mike Hailwood and Giacomo Agostini.

While Rossi’s results speak volumes, his cultural impact has been even more impactful. From post-race celebrations to rider branding, Vale has been a pioneer for modern Grand Prix racing. Fans wishing to submit thank you videos to Rossi should send them to the dedicated email address (grazievale@motogp.com) by Friday, October 29, 2021.