MotoAmerica Will Not Race At Circuit Of The Americas With MotoGP 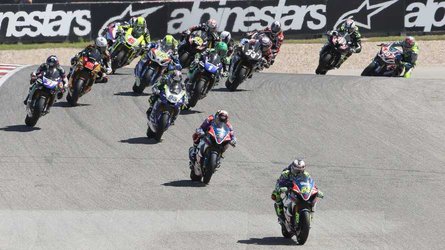 Since Nicky Hayden left the MotoGP paddock in 2016, a U.S. rider hasn’t cracked into the premier class. However, 2015 MotoAmerica Supersport champion Joe Roberts and five-time MotoAmerica Superbike champion Cameron Beaubier secured seats in the intermediate Moto2 class in 2021. It’s a two-way street as well, with riders like Héctor Barberá, Loris Baz, and Tony Elias taking to the MotoAmerica grid following stints in MotoGP.

That cross-pollination is no coincidence. In 2015, the Fédération Internationale de Motocyclisme (FIM), Dorna, and Wayne Rainey created MotoAmerica to promote AMA Superbike racing. As a result, MotoAmerica joined the long list of FIM-sanctioned racing series. With stronger ties to international racing, MotoAmerica planned to hold a support race at MotoGP’s Grand Prix of the Americas at the Circuit of the Americas (COTA) in Austin, Texas.

When MotoGP released it provisional calendar the U.S. round was scheduled for April 16-18, 2021. Of course, COVID-19 cases and restrictions forced Dorna to put the race on hold. Once the global health crisis forced organizers to cancel the Japanese Grand Prix, MotoGP rescheduled the COTA race weekend to October 1-3, 2021. Unfortunately, MotoAmerica already made other plans.

The American race series will host its final two rounds of the 2021 season at the New Jersey Motorsports Park on September 10-12, 2021, and the Barber Motorsports Park on September 17-19. While some speculated that MotoAmerica would add one last race to the calendar to support MotoGP, a bulletin emailed to race teams on August 8, 2021, confirmed the current schedule.

“As much as we would like to be part of the MotoGP program,” said MotoAmerica COO Chuck Aksland, “the way that the paddock was going to be laid out, where we would have to pit, the expense of doing the event, there just wasn’t a lot of upside for us, especially when we’re going to go back again when they come back again next April.

Unfortunately, the global health crisis has thwarted MotoAmerica and MotoGP’s collaborative efforts over the past two years. In 2020, MotoAmerica postponed the Austin round until November before outright canceling the event. Hopefully, we can see both series race at COTA in 2022, if the coronavirus cooperates, of course.