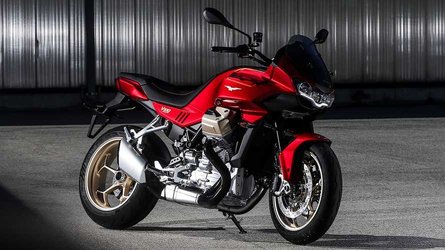 Moto Guzzi spent most of 2021 celebrating its 100-year anniversary. While the Mandello Del Lario brand enjoyed a long gaze in the rearview, it also hinted at a new model in press materials. The company hasn’t exactly guarded that upcoming release as top-secret material, with a passerby capturing spy shots near Italy’s Lake Como.

With the final quarter of 2021 fast approaching, Moto Guzzi shifted its focus to the future, lifting the covers on the all-new V100 Mandello. The introduction comes without full specs, pricing, or availability, however. Moto Guzzi plans to deliver the full model presentation on November 23, 2021, at the opening day of EICMA 2021.

While we have to wait another few months for the complete details, Moto Guzzi’s social media handles and YouTube channel give us an extended peek at the new Mandello. Despite an overreliance on screeching eagle sound effects, the reveal video highlights the platform’s single-sided swingarm and liquid-cooled mill.

Commemorating Moto Guzzi’s centennial, the aptly-named V100 engine recognized the brand’s achievements while pushing it into a new era. Given the nomenclature, many assume that the liquid-cooled transverse V-twin will boast a displacement around 1,000cc and produce between 110 and 120 horsepower.

Of course, we’ll have to wait for the firm’s EICMA presentation to confirm figures, but speculation should tide us over for now. Aside from the swooping drone shots and majestic eagle landing, the video also captures the V100 Mandello’s active aerodynamics. When the motorcycle’s speed rises, the windshield follows suit while two side flaps open to manage oncoming airflow.

In addition to Moto Guzzi’s own channels, Italian media outlets got an exclusive look at the new Goose during a special press conference. The V100 on display also revealed an up-spec variant with Ohlins semi-active suspension. However, both versions are expected to tout Brembo braking systems and Pirelli Diablo Rosso IV tires. Many anticipate a quickshifter as well, but there’s no word if it will be standard equipment or an add-on option.

Moto Guzzi may have saved the full unveiling for EICMA 2021, but the V100 Mandello is already a fitting start to the brand’s next 100 years.

Royal Enfield the standout for August as UK motorcycle ...