Monster Energy Honda Eyes Another Win At The 2022 Dakar Rally

Honda rider Ricky Brabec snapped KTM’s 19-year Dakar Rally winning streak in 2020. A year later, Kevin Benavides captured another victory for Team Red at Dakar 2021. Unfortunately, just three months later, in April, 2021, Benavides left the Honda Factory team for an opportunity at the Red Bull KTM squad. With the Monster Energy Honda team defending its back-to-back wins against Benavides and KTM in 2022, the team is more focused than ever.

“In 2020 and 2021 the Monster Energy Honda Team won the race and, in the most recent edition, we achieved a great result with two bikes in the top two positions on the final podium,” noted Monster Energy Honda Team Manager Ruben Faria. “This year, 2022, we take the role of favorites, the team to beat, and that’s why we have to be really well-prepared for the race and go for the hat-trick.”

Brabec returns to lead the Honda charge. Despite winning four stages in the 2021 race, Brabec had to settle for second and dons the number 2 plate this year as a result. With Brabec training harder than ever, we wouldn’t be surprised if the American regains his crown at the 2022 Dakar Rally. 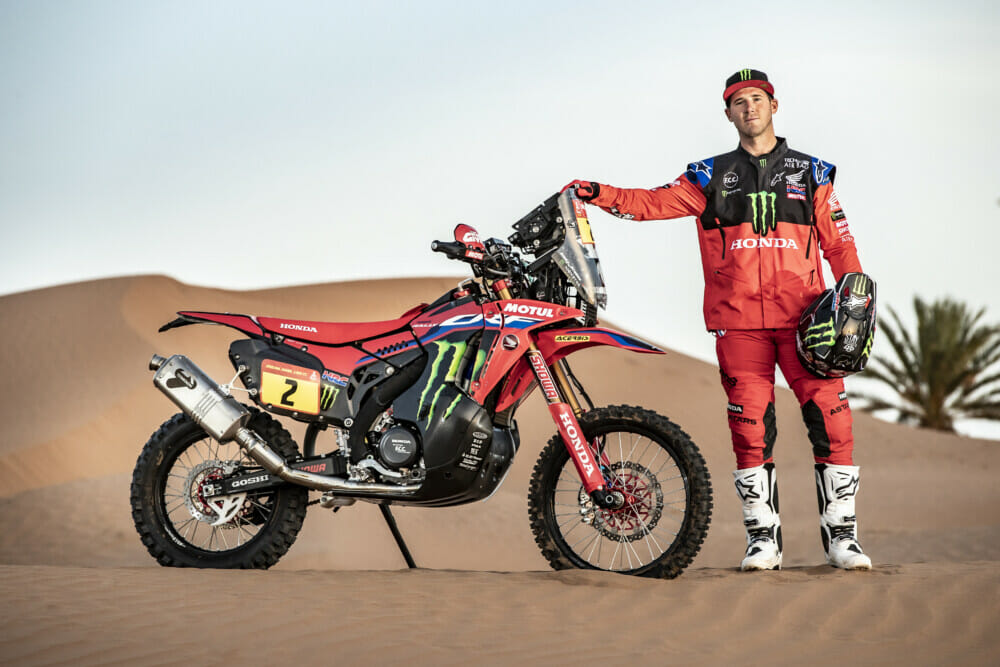 Teammate José Ignacio Cornejo also had a strong showing last year, leading the race for three days and achieving one stage win. He will look to build on that foundation in 2022. Long-time Honda rider Joan Barreda also returns to the factory team for the new season. Among the current lineup, the Spanish rider has the most stage wins, and he hopes to use that experience to his advantage.

Lastly, newcomer Pablo Quintanilla boosts the team’s chances in 2022. The accomplished Chilean rider finished the 2016 Dakar Rally in third place and improved on that feat in 2020 with a runner-up finish. Quintanilla also holds two World Cross-Country Rally championships, so his presence will only push the other Honda riders to new levels.

“Obviously, the main goal is the Dakar for any Honda rider,” admitted Brabec. “We have four really good, strong, confident riders. Unfortunately, I want to win, but so do the other three. If one Honda wins, or two, or three, or, just one gets on the podium-it’s a team effort and a team win. So as a whole, that’s our main goal, to win the Dakar again.”