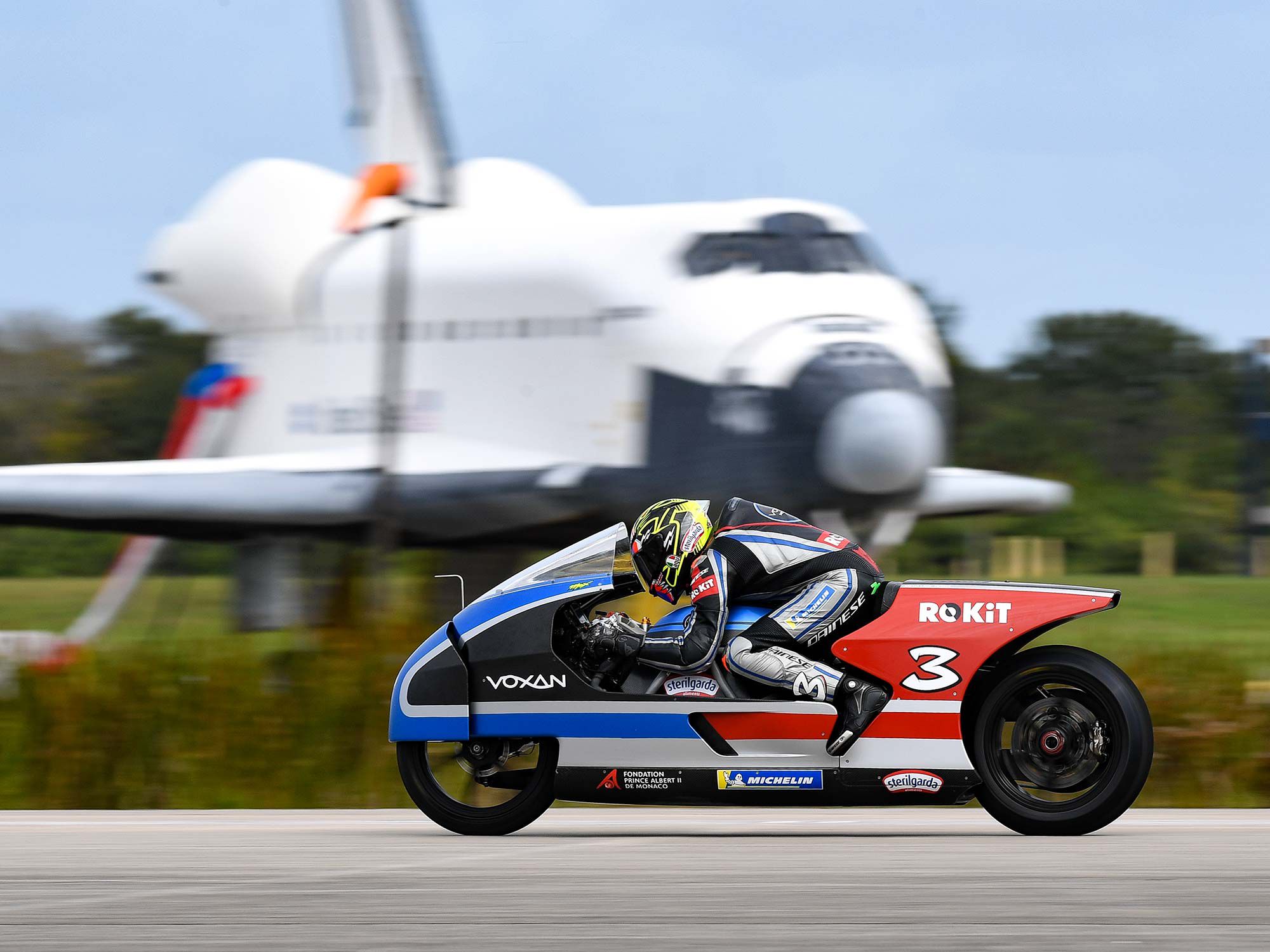 Max Biaggi is still living the motorsports dream. At age 50, the six-time world champion may not have expected to ever again taste that inexplicable mixed cocktail of speed and danger since retiring from competition in 2012. But now, committed to riding for Voxan Motors, the motorcycle arm of high-performance electric vehicle constructor Venturi, Biaggi has experienced something that is nothing like riding a powerful MotoGP racer. It is more like piloting a rocket.

“When I retired from racing, I closed an important chapter of my life,” the Italian commented, “I needed a break from the pressure and emotional stress linked to racing. I withdrew as a world champion and I was satisfied with it, because, even if I had a stellar career, the fans remember the last seasons.” And they are rarely favorable memories.

After some well-deserved rest, Max opened the door to a new challenge. “It’s difficult to explain the adrenaline you get when you ride a MotoGP. When visionary and pioneer Gildo Pastor told me about the unique, extreme Voxan project, all the longing for that adrenaline rush returned to the surface.”

Two years ago when the project began, Biaggi didn’t expect to feel like an astronaut. In November of 2021, Biaggi and the Voxan team flew to Space Florida’s Launch and Landing Facility at Kennedy Space Center to break the 408 kph (253.5 mph) speed record he’d set almost one year ago.

“It was incredibly emotional to enter NASA’s spacecraft launch structure,” Biaggi said. “It is such an iconic place and I had goosebumps thinking that I would reach new speeds on the same tracks where the space shuttle had landed. That’s something that only a few years ago would have been considered futuristic or simply impossible, considering that I am riding an electric bike.”

For eight days, the Voxan Motors crew did several tests, taking care of all the details and managing to set 21 new records. With a speed of 455.737 kph (283.182 mph), Max Biaggi and the Voxan Wattman claimed the prestigious world record in the “partially streamlined electric motorcycle under 300 kilograms” class. In line with FIM (Fédération Internationale de Motocyclisme) regulations, the Voxan Wattman’s speed was measured from a flying start over 1 kilometer in opposite directions, two runs performed within a period of two hours, with the final speed being the average of the two speeds recorded over these two runs. The Wattman’s GPS speedometer recorded a maximum speed of 470.257 kph (292.204 mph).

“When you see the instruments signaling 470 kph you don’t believe your eyes. Even for a MotoGP racer used to pushing 300 kph, this is something extreme. At that speed, the track suit vibrates and burns your skin, your eyes cannot see well. There is so much turbulence that you think you can hold on, but you can’t. You don’t look anymore at what is straight ahead. You need to look wider. It’s crazy.”

The silence of an electric motor becomes the rumble of a rocket. “When you break the wall of the air, the wind creates a really big noise. The sensation is like driving into, and then through, a wall.”

Biaggi recalls every single moment of that fantastic adventure. “Unlike the first time, I knew what to expect, and throughout the eight days we were at the NASA Space Center, I took care of all the details I hadn’t considered in the past. I am a maniac about this. I have always been. You can prepare everything at the best, but still, when you are sitting on the bike, waiting for the green light to start, a thousand thoughts pass into your mind. The gray ribbon of the track looks endless and infinite and merges with the sky.”

In his mind, Biaggi quickly rehearsed all the complicated procedures. “You try not to think that you will fly at half the speed of sound, with the wind trying to impose its will,” he said. “It’s all about power, stability, and aerodynamics. Plus, the problem is not only to reach the moon but also to come back,” he joked. “You need to brake, and at that speed it is not easy. You need to manage the rear tire and consider the temperature; that experience in MotoGP is an ally. All the senses come to support your instinct because everything is so surreal. To complicate things, you also need to brake at a specific place in order to avoid finishing off of track.” 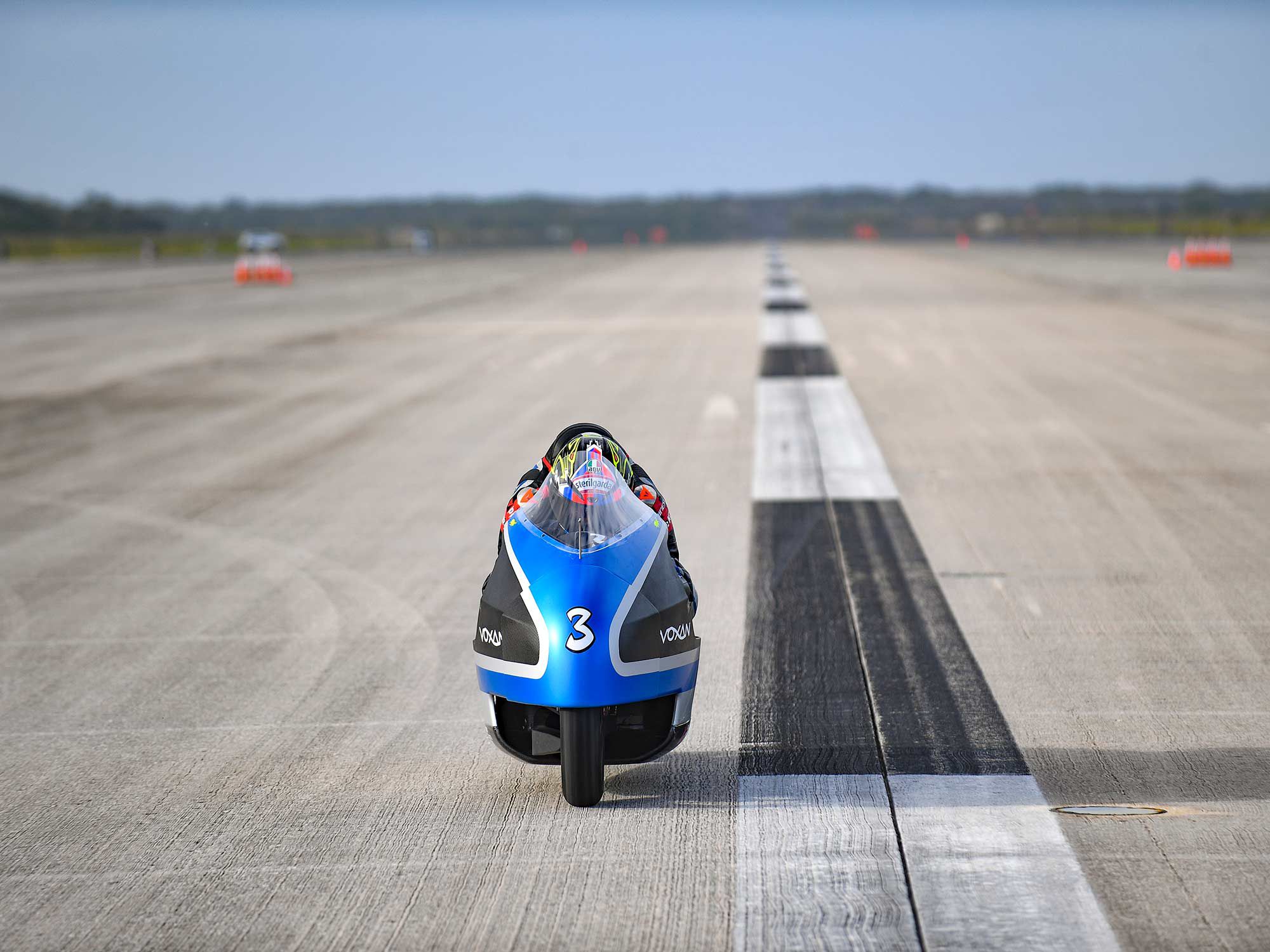 Tucked in behind the fairing at speed, Biaggi struggled to spot the braking markers. (Voxan/)

To help Biaggi in this important point on the track, the Voxan crew placed cones indicating his braking point. “You won’t believe it: I asked for bigger cones because I was struggling to see them,” Biaggi continued. “The human brain is not used to running at that speed and all the references I had developed riding the most beautiful bikes on the planet were not useful. You need to reset everything and write a new chapter.”

Two years ago, when the collaboration started, their current speed record would have sounded like science fiction. In November 2020, the Voxan Wattman achieved a speed of 408 kph. In order to beat that record, the engineering team at Venturi/Voxan worked on the motorcycle’s air penetration and stability. While simulations in the wind tunnel play a crucial role, the R&D department has also enlisted the help of specialists in fluid dynamics simulation in search of their high-speed targets. 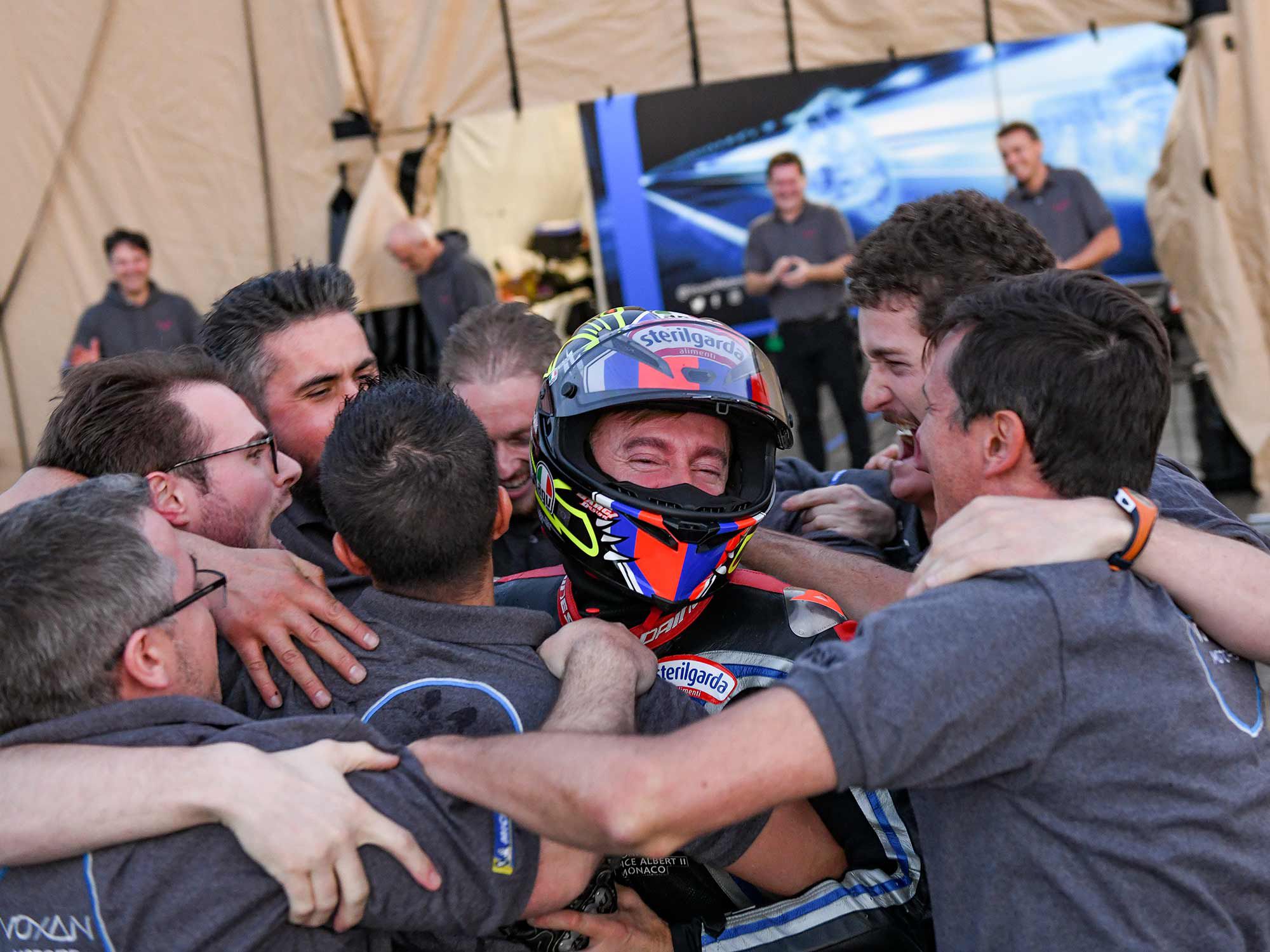 “In less than a year, they have succeeded in reducing the motorcycle’s weight while increasing its power and improving its stability. Following the records we set in November 2020 in the ‘over 300 kilogram’ class, these 21 new records set another milestone. Moreover, having reached 470 kph, we achieved the highest top speed ever reached by a naked bike. It’s an absolute record, considering not only the electric bike but also those powered by an internal combustion engine. In a word: this time we ride at a space speed!!” Biaggi concluded.