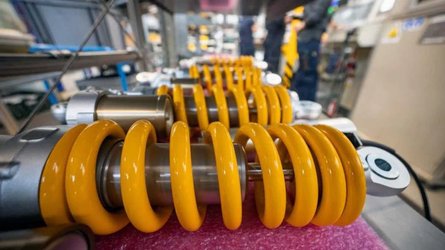 In recent years, several European motorcycle manufacturers have partnered with Asian OEMs on development and production deals. From KTM and CFMoto to Triumph and Bajaj to KTM and Bajaj, the collaborations frequently benefit Asian industry leaders with Euro designs and technology, while the European brands gain access to manufacturing and global markets.

Those relationships are exclusive to motorcycle makers though. Component suppliers like Marzocchi suspension are also realizing the advantages of such a relationship. For that reason, Marzochhi’s parent company VRM has secured a deal with Zhejiang Mazhuoke Machinery Manufacturing (QJ Motors) for future production.

VRM purchased Marzocchi in 2016 from its then American parent company Tenneco. Up to that point, Marzocchi was in danger of shutting down, which would have left many BMW, Bimota, Ducati, and MV Agusta models without suspenders. Since then, the brand has continued to evolve, now offering semi-active suspension and recently revealing its fully adaptive system.

“When we bought Marzocchi, the turnover was 8 million per year,” noted VRM CEO Florenzo Vanzetto. “Today it has a turnover of 32 million and is growing more and more with new projects and new partnerships. Within the Automotive division of VRM it is becoming the core business.”

Under the new partnership, VRM and Zhejiang Mazhuoke Machinery Manufacturing established a new state-of-the-art factory in China’s Zheijane province. While research and development, testing, and design will still reside in Bologna, the agreement also allows Marzocchi to market its suspension in China and other global markets.

The deal details haven’t yet established if QJ Motors models will sport Marzocchi setups moving forward, but we expect a certain level of crossover between the two brands. With the brand releasing a sportbike resembling the Kawasaki Ninja 400 and an adventure bike similar to Suzuki’s V-Strom 650, the premium suspension would only help the brand’s competitive prospects.