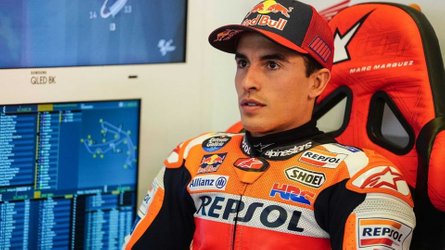 Marc Márquez won his first race in 581 days at the German Grand Prix after returning from a 2020 season-ending arm injury and struggling through his first five rounds of 2021. Following a restful summer break, number 93 achieved a second-place finish at Aragon and back-to-back wins at the Grand Prix of Americas and Emilia Romagna GP.

Unfortunately, just as Márquez returned to championship form, news broke that the six-time champ suffered a concussion during a motocross training accident. As a result, he missed the penultimate round of the 2021 season, the Algarve GP in Portugal. However, the eight-time world champion has raced following worse injuries, leading many analysts—including MotoGP commentators—to wonder if there was more to the injury than Honda and the Márquez camp let on.

Today, we learned that there was. Announced via Marc Márquez’s Instagram page, the racing world learned that concussion also resulted in diplopia (double vision).

“The examination carried out on Marc Márquez today after the accident that occurred, has confirmed that the rider has diplopia and has revealed a paralysis of the fourth right nerve with involvement of the right superior oblique muscle,” stated Márquez’s ophthalmologist Dr. Bernat Sánchez Dalmau. “A conservative treatment with periodic updates has been chosen to follow with the clinical evolution. This fourth right nerve is the one that was already injured in 2011.”

Márquez previously battled the same injury in his rookie Moto2 season. During a crash at the Malaysian Grand Prix, a piece of gravel damaged the nerve in the rider’s eye. Many believed that the diplopia diagnosis could spell the end for the rising star, but Márquez returned in 2012 to take the Moto2 championship and a MotoGP seat at Repsol Honda the following season.

Now, Márquez battling through another potentially career-ending injury, he will sit out the final round of the 2021 season at Valencia (Spain) and the post-season Jerez test. Hopefully, the six-time titleholder can fully recover during the off-season and do what he’s done his entire career—battle back to the front.

Vicki Golden Sends It At The 2021 Red Bull Imagination 2.0 Event

Milwaukee's Mama Tried Motorcycle Show Is On For December 2021