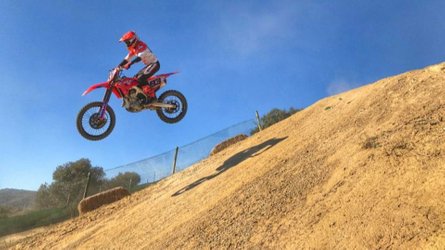 The news feed around Marc Marquez’s latest injury has been a rollercoaster. First, Honda and the Marquez camp reported that the six-time MotoGP champion only suffered a concussion during a training crash prior to the 2021 Algarve GP. Then, the diagnosis changed to include a return bout with diplopia (double vision).

In December, 2021, Marquez’s ophthalmologist, Dr. Bernat Sánchez Dalmau, explained that the rider’s condition improved enough to begin pre-season training. However, less than a month later, sources reported that number 93 wouldn’t make the 2022 Honda MotoGP presentation on January 14, 2022. One day after those reports surfaced, Box Repsol released the date for the exclusive 2022 Repsol Honda team presentation, which Marquez will attend on February 8, 2022.

While details concerning the Spanish rider’s original diagnosis and recovery have been vague, Repsol and the Marquez camp are leaving little doubt in the nine-time world champ’s abilities with their latest video. For the first time since his crash in November, 2021, Marquez jumped back on a motorcycle for some pre-season seat time.

Of course, Honda personnel acknowledged that the Repsol rider experienced a concussion (and diplopia) as a result of motocross training, but that didn’t stop Marquez from attacking the circuit out of the gate. Based on the footage, there’s no question that Marquez is fit to ride, but off the motocross track, he still has one jump to clear.

With the first pre-season test at Malaysia’s Sepang Circuit is scheduled for February 5-6, 2022, Marquez wants to complete a full day of riding at a Grand Prix track to prove that he’s in shape.

“Since I got injured, my goal was to try to be at the first test or the first race and it looks like we are on the way,” admitted Marquez. “Now I need to do a one-day test at a Grand Prix circuit and do a full day with a lot of laps to see when I get tired if I have any problems. We need to evaluate those things before I’ll be allowed to ride at the Malaysia Test.”

Regardless of how number 93’s pre-season unfolds, the latest Repsol video shows that the rider will still send it in typical Marquez fashion. Even if he has to miss the first pre-season test, we know that the champ will do everything in his power to return to the MotoGP grid for the first round in March, 2022.

Lil' Shredder: A Honda Super Cub scrambler from the UK