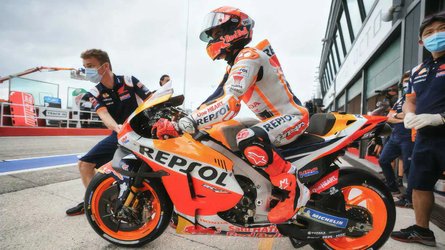 MotoGP teams up and down the paddock have been busy prepping for the start of the 2022 season. With the first official test scheduled to take place in Sepang, Malaysia on February 4 and 5, 2022, there’s clearly no time to waste. That’s why, on January 26, Repsol Honda officially announced that Marc Marquez has been given a clean bill of health by doctors, and will be on track to test the new RC213V at Sepang.

The eight-time MotoGP World Champion has been powering through recovery as best he can. Although things were pretty uncertain for a long time, Marquez kept his head down and just went on training as usual. Although his diplopia diagnosis wasn’t something he could directly control, physical fitness is as natural for the champ (and MotoGP riders in general) as breathing. By mid-January, he was back on a motocross bike—and just a couple of days later, on track at Portimao.

“Throughout the winter Marquez has had continual medical checks and consultations to monitor his diplopia. In recent weeks the improvements in his condition saw his medical team deem his recovery sufficient to return to training on two wheels. The #93 first returned to the motocross track before trying the Honda RC213V-S in Portimao and a Honda CBR600RR in Aragon,” reads the official Repsol Honda statement.

“Last Monday, January 24, Marquez underwent another medical check which reconfirmed that the treatment has been a complete success and the eight-time World Champion is in a suitable condition to ride a MotoGP bike,” the team continued.

“Therefore, it has been decided that Marquez will start his 2022 campaign at the first official MotoGP Test in Sepang before heading to Mandalika, Indonesia the following week. This will be Marquez’s first time back on a MotoGP machine since winning the 2021 Emilia Romagna GP ahead of Pol Espargaro. The Repsol Honda Team will head to the first test of the new season at full strength with Marquez alongside Pol Espargaro, who enters his second year with the team,” the statement concluded.

It’s good news for Marquez, the team, and racing fans around the world looking forward to the 2022 season. Here’s hoping for good health and exciting racing for all in the months to come.

How To Remove Bad Car Smells