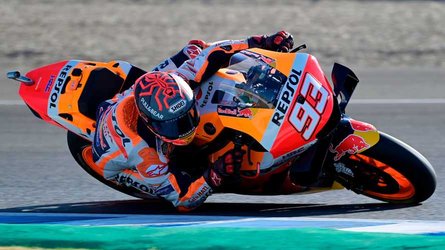 Marc Marquez is back on track at Portimao but is still under assessment following his November motocross crash that left him with diplopia, also known as double vision. With doctors unsure of how long Marquez’s recovery period would last, things are looking good for the Spaniard as Honda announced that he will be participating in a track day at Portimao, Portugal.

Marquez’s diplopia is a returning injury that was first sustained back in 2011 while he was racing in Moto2. The injury resurfaced after a motocross training incident in November left him with a concussion and double vision, and the inability to compete in the final two races of the 2021 MotoGP season.

The injury marked the second time that Marquez had to miss races with the first being his broken arm that prevented him from participating in the 2020 MotoGP opener.

This, however, is not the first time that Marquez saddled up post-injury, as he recently kicked up dirt on a motocross bike as part of his training.

The Honda MotoGP factory team announced that Marquez will be back to participate in a track day at Portimao, the Portuguese GP venue. Marquez will take to the track on the back of a Honda RC213V-S. However, the team stated that it will be continuing to assess his condition prior to the 2022 season.

Marquez’s doctors are advising the racer prior to the start of the 2022 season that is kicking off this February. Doctors will determine whether he is fit for the MotoGP pre-season test in Sepang as well. Marquez, however, states that “If I’m riding the bike it’s because I have a perfect vision. But at the moment, I follow the advice of the doctor.”

It looks like the Spanish racer is taking a bit of a fast track to recovery. It seems that Marquez’s injury will heal just in time for the pre-season, and hopefully, doctors will deem the racer worthy of attending the Sepang test.

Top 10 Most Expensive Motorcycles Sold At Auction In 2021