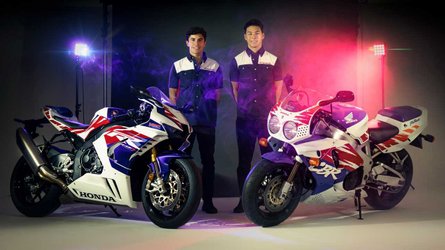 While Team Red harkens back to the first Fireblade with an eye-catching, ‘90s-inspired livery, the changies under the trim is much more subtle. The 215-horsepower inline-four, aluminum diamond frame, and aerodynamic bodywork return, but Honda engineers adjusted the flagship CBR for better mid-range power, corner stability, and corner-exit speed.

Of course, Marquez already rode the CBR1000RR-R Fireblade SP in April, 2020, but the latest updates are aimed at improving Honda’s Superbike World Championship (WSBK) odds. Taka and Marc may wrangle Team Red’s RC213V prototype around MotoGP circuits, but Isle of Man TT rider John McGuinness and the new look WSBK Team HRC will benefit most from the latest-generation ‘Blade.

With Xavi Vierge joining HRC from the Petronas Moto2 team and Iker Lecuona coming over to WSBK after a short two-year stint with MotoGP’s Tech 3 KTM squad, Honda is gambling on youth in 2022. The pair enjoyed their first ride aboard the new Fireblade at the Jerez circuit in Spain from December 15-17, 2021. Unfortunately, Lecuona injured his left hand in a crash on the second day, but Vierge finished the test days without incident.

With Lecuona and Vierge still unproven in Honda’s ranks, Marquez and Nakagami are still the best candidates to launch the new superbike. The duo may not ride the Fireblade on race days, but Marquez has been spotted training aboard a Honda production model.

“Congratulations on the 30th anniversary of the Fireblade,” stated Marquez. “It shows Honda’s spirit in both racing and production bikes.”

How To Buy And Maintain A Backup Generator