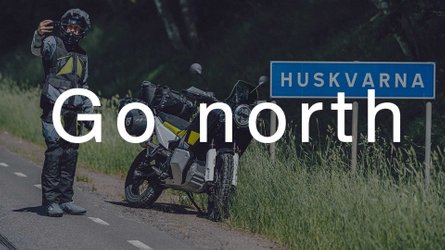 Following the unveiling of the Norden 901 concept at EICMA 2019, Husqvarna embarked on a two-year development process for its first adventure bike entry. While the neo-rally styling and a 889cc parallel-twin seemed like a perfect match to adamant ADV riders, the firm employed British world traveler Lyndon Poskitt to help turn the Norden 901 into the ultimate tourer.

Promotional videos leading up to the 2022 Norden 901 reveal only increased the hype surrounding the new mid-size adventurer. However, by December, 2021, new middleweight contenders such as the Ducati DesertX and MV Agusta Lucky Explorer 9.5 stole the Norden’s thunder. To remind riders of the 901’s capabilities, Husqvarna released a new documentary video showcasing Lyndon Poskitt’s freewheeling adventures aboard the Norden.

Starting from the Husqvarna museum, Poskitt’s journey north starts with an ode to the historic brand. A visit with local retired Husky racers also honors the company’s rich motocross history, but Poskitt’s journey doesn’t start in earnest until he hits the open road—and the off-road trails. The Norden may not tout the same premium off-road-oriented componentry as its cousin, the KTM 890 Adventure R, but in the hands of Poskitt, the 901 proves its trail prowess.

Midway through the journey, Poskitt praises the Norden’s agility and comfortable ergonomics. Coming from a Husqvarna ambassador, the commentary sounds like a thinly-veiled press release, but it’s Poskitt’s actions on the 901 that speak volumes for the new middleweight ADV. From rock-crawling to pounding the pavement to schlepping through the mud, the Norden proves its meddle on the trail and the tarmac. That’s where true adventure happens, not on spec sheets or features lists.

The rest of the video allows that quality to shine through, highlighting spontaneous moments of the journey like Poskitt learning to smoke fish or coming across a herd of reindeer. Regardless of the bike you’re on, adventure is all about seizing the moment. Of course, Husqvarna and Lyndon Poskitt want the viewers to know that the Norden 901 is an excellent gateway to that world, even if it has more competition on the market now.