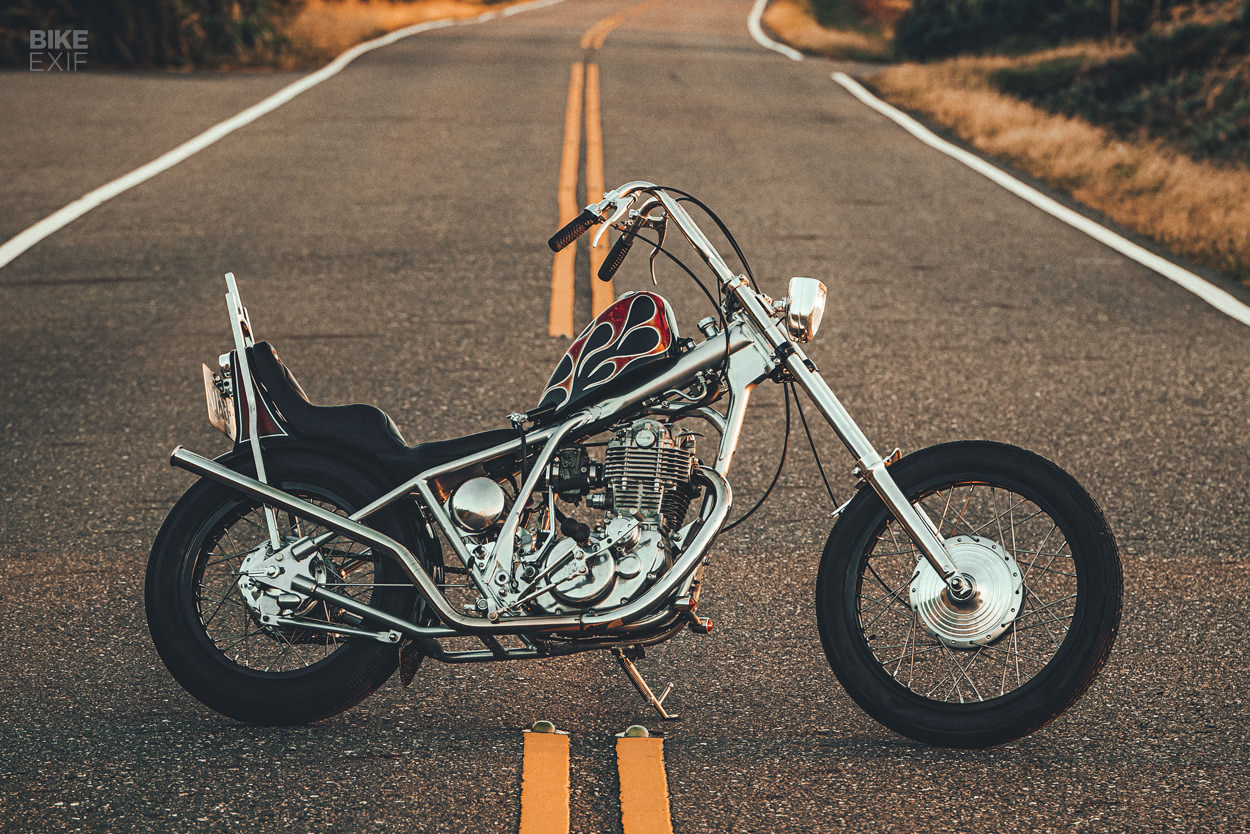 The custom scene has changed a lot over the past decade, but the venerable chopper still has an enduring appeal. And when someone manages to capture that classic 70s vibe as well as Fo Huang has done with this chopped Yamaha SR400, it’s impossible not to smile.

Fo’s based in Kaohsiung City in southern Taiwan, where he creates furniture and custom motorcycles as NamiXII Design. Dubbed ‘Light Tripper,’ his Yamaha is a charming homage to the choppers of the 1970s—from its stance to its many thoughtful details. It also took home the ‘Best in Show’ award at the 12th annual Ride Free show in Taiwan recently. 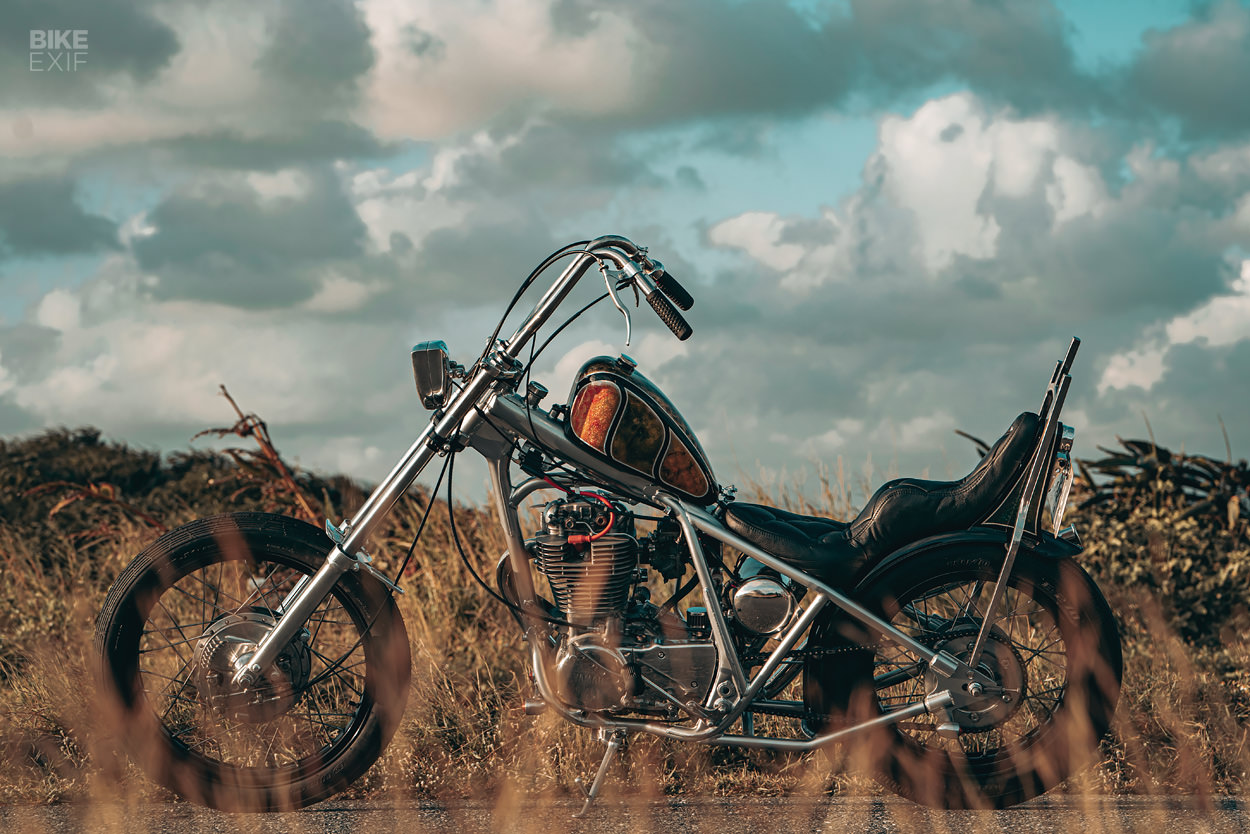 The 1985-spec Yamaha SR400 might seem like a weird choice as a donor for a chopper, but Fo’s managed to pull it off. He started by hacking off a huge chunk of the SR’s frame, then grafting on a rigid rear section. The main frame backbone that holds the oil is still intact.

Fo kept the SR’s OEM forks and drum brake wheel hubs, but laced on new rims. It now rolls on a 21F/18R combo, with a Duro tire up front and a Shinko at the back. There’s also a custom-made brace to stiffen the front forks—and to mount the tiniest fender we’ve ever seen. 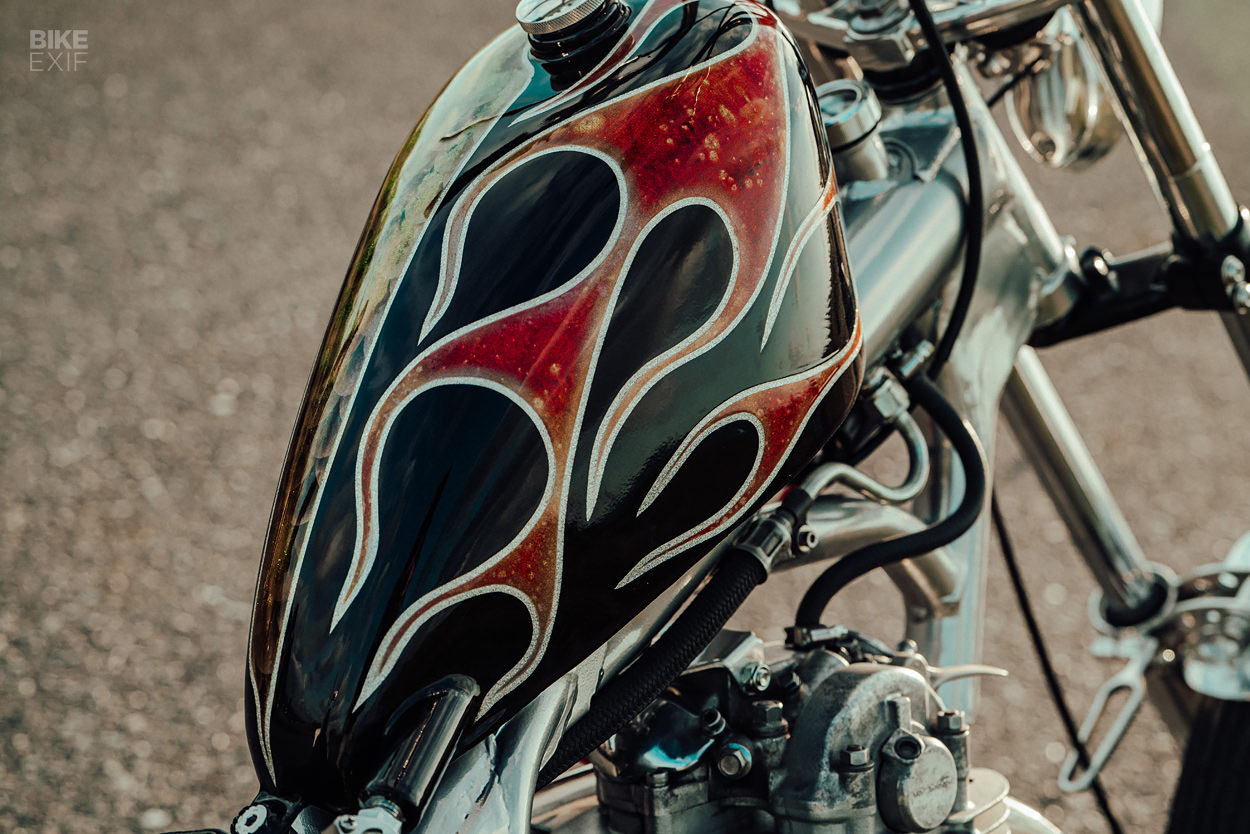 For the fuel tank, Fo acquired a used Sportster unit—then modified the heck out of it. It features a custom bung for the fuel petcock and a tidy little knurled gas cap, and there’s an oil temperature gauge installed just in front of it.

Lower down is a handmade ‘oil tank.’ But since the SR’s oil sits in its frame, this is actually where the electrical components are stashed. The ignition’s been relocated to the frame gusset just beneath it. 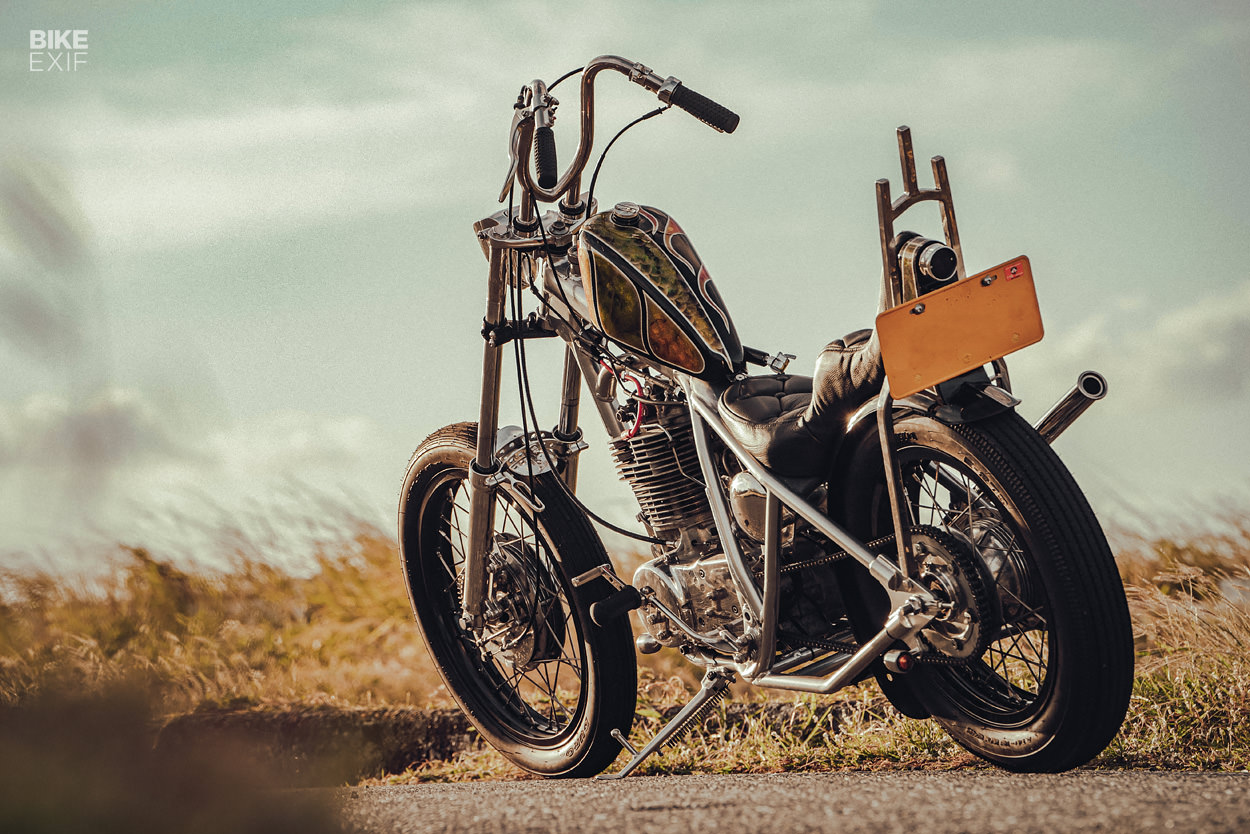 Up top is a custom king and queen seat. Fo shaped the pan using fiberglass, added foam, and had a local furniture upholsterer cover it in leather. Behind it, a custom sissy bar wraps around the generous rear fender.

Sitting ‘inside’ the sissy bar is a quaint piece of bodywork that ties everything together, visually. It also hosts the taillight, and a license plate bracket. 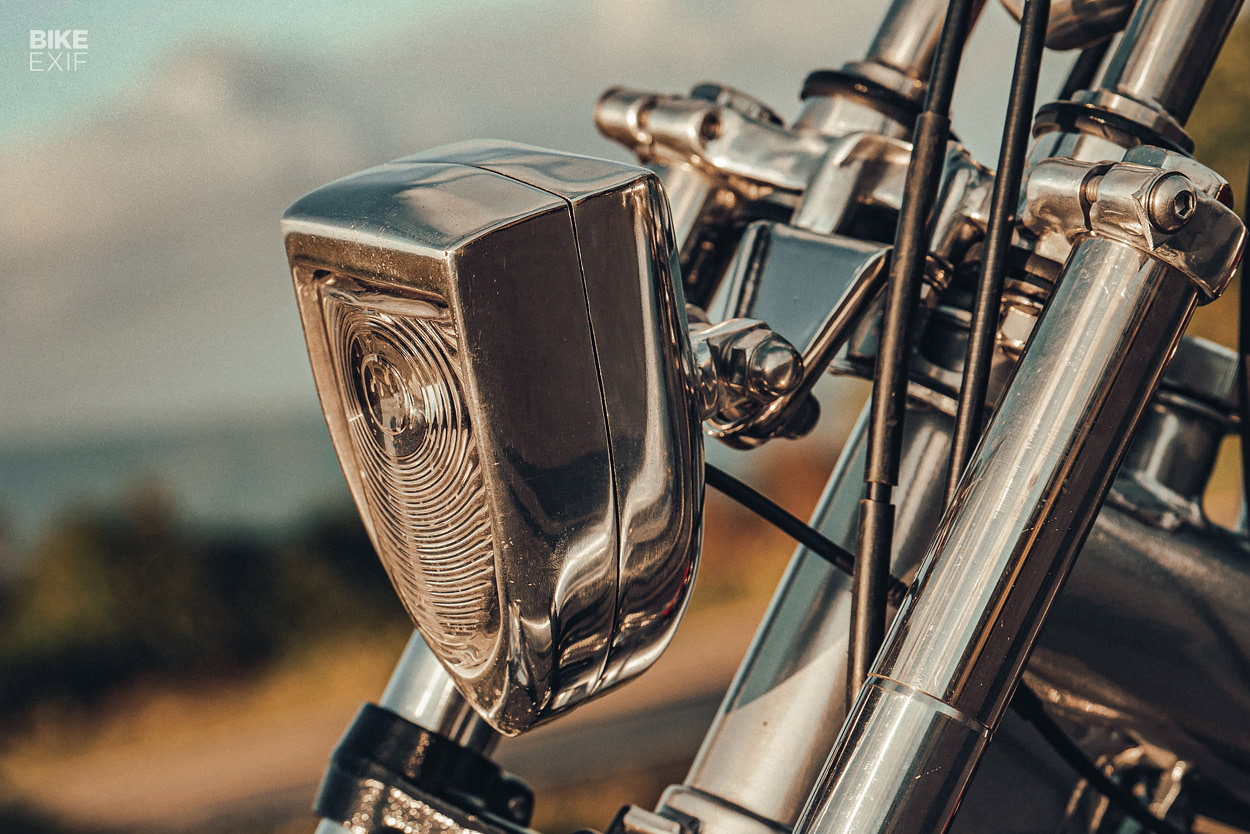 The headlight’s particularly interesting—it started out as just the lens from a 1950s Chevrolet light. A new housing was prototyped using 3D printing, then a mold was made so that the final part could be hand-cast in aluminum. It also features LED internals, which can change from white to yellow depending on riding conditions.

Behind it is a set of handcrafted bars, fitted with new grips, simple controls and integrated micro switches to keep things tidy. 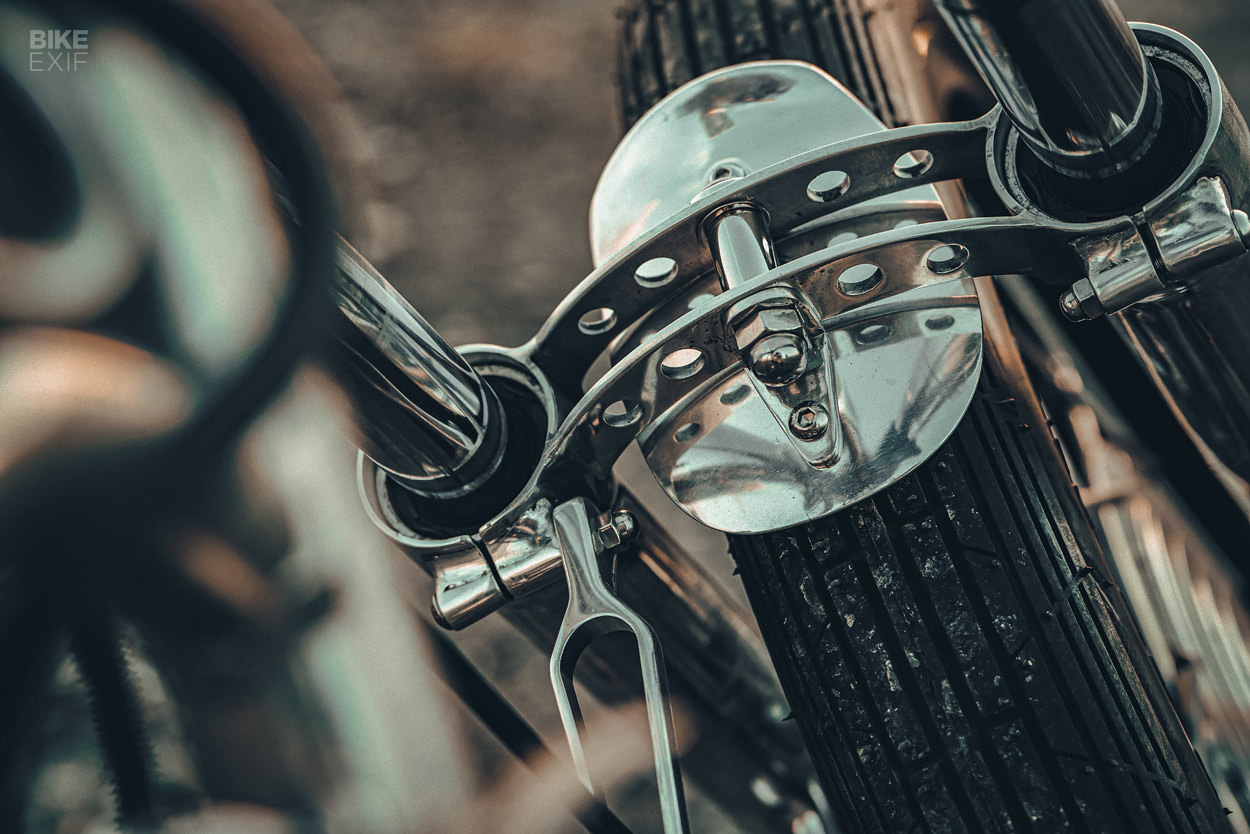 Light Tripper’s casual demeanor belies just how much work went into it. There’s a whole bunch of neat little touches, like the custom forward foot controls. Look closely, and you’ll notice that they feature the same drilled aesthetic as the fork brace.

There’s also a nifty little cable guide for the front brake, and brackets to hold a set of low-mounted turn signals. Fo fabricated most of the bits himself, outsourcing jobs like laser cutting and CNC machining. 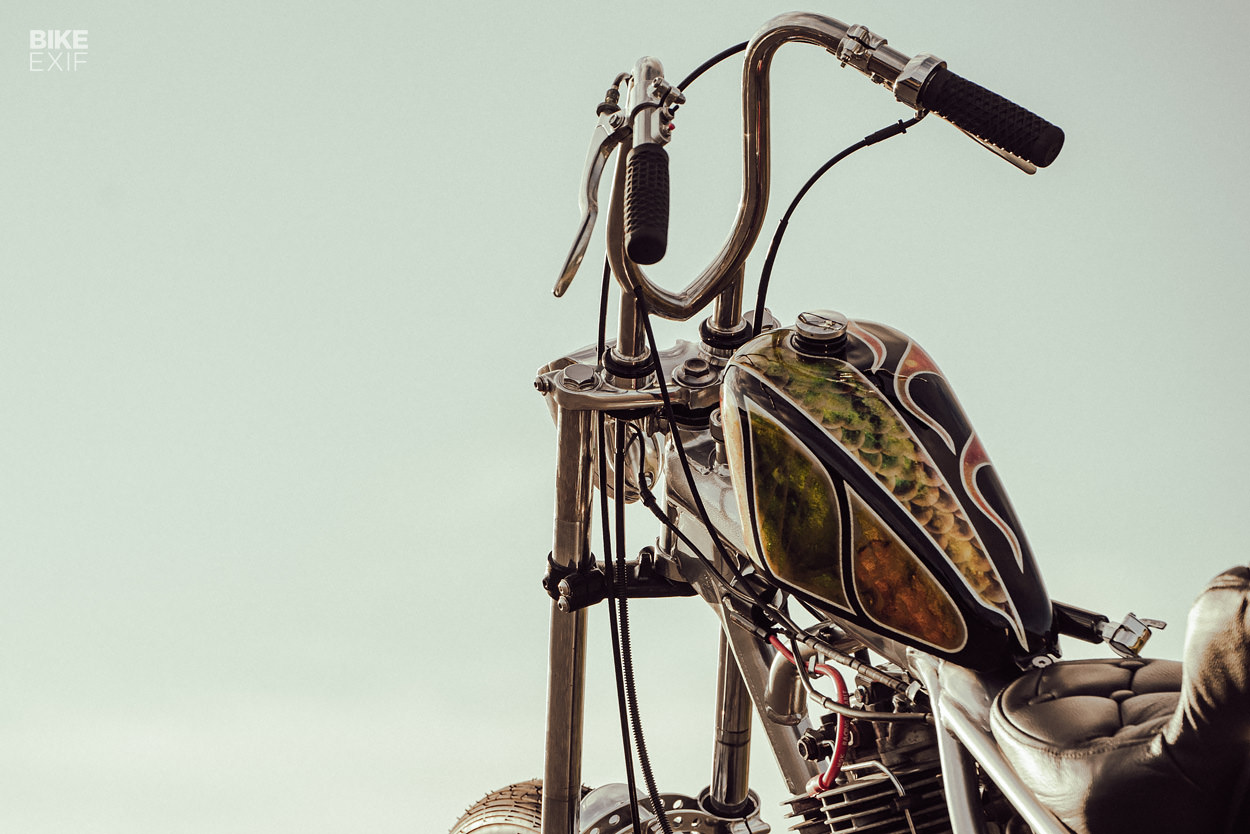 He had help with the paintwork too, with a friend laying down a groovy asymmetrical design. With flames on one side and snake scales on the other, it’s about as retro-fabulous as they come. Oh, and that bit behind the seat’s been painted differently on each side too, so that the left and right views are each cohesive.

Light Tripper’s buttoned up with a host of silver and polished finishes, and a hand-made (and appropriately long) exhaust. 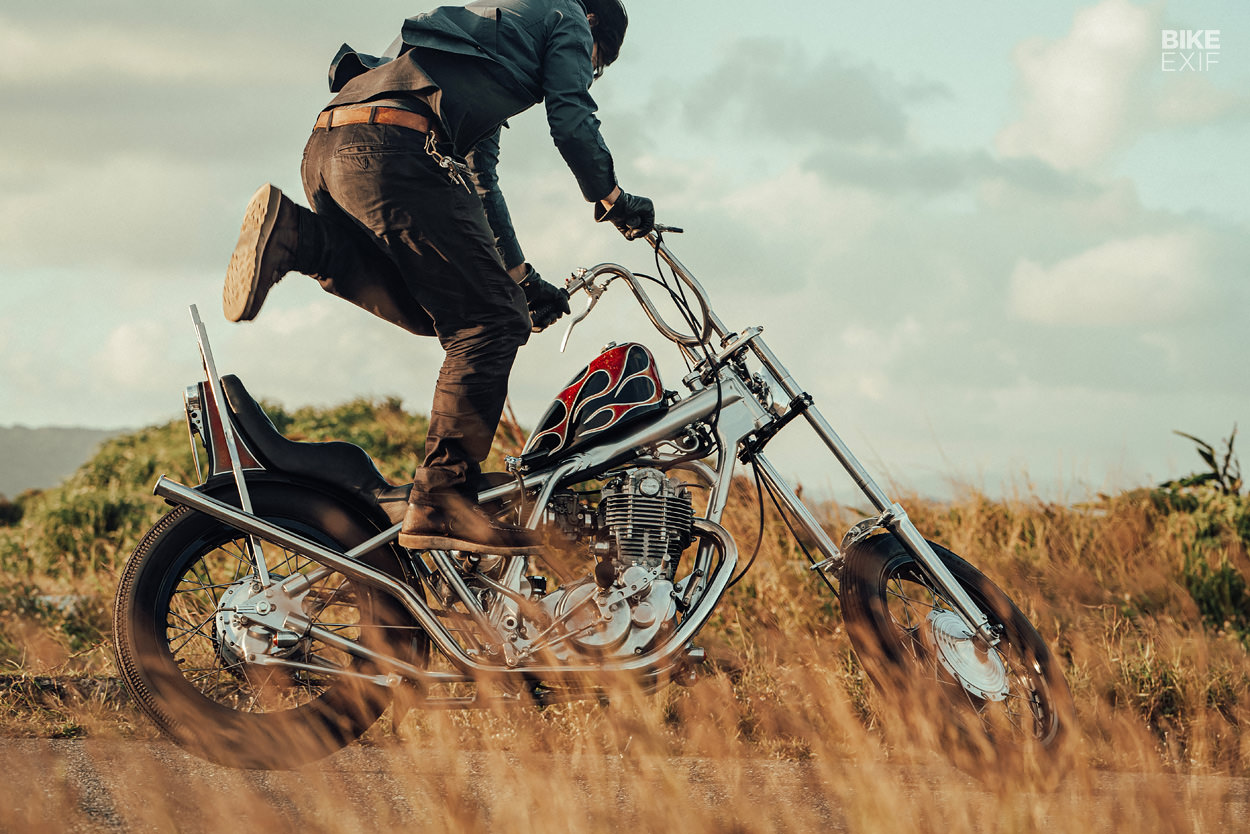 Fo’s build makes a strong case for funky, compact choppers—particularly ones built with Japanese singles. As throwbacks go, this is as good as it gets. 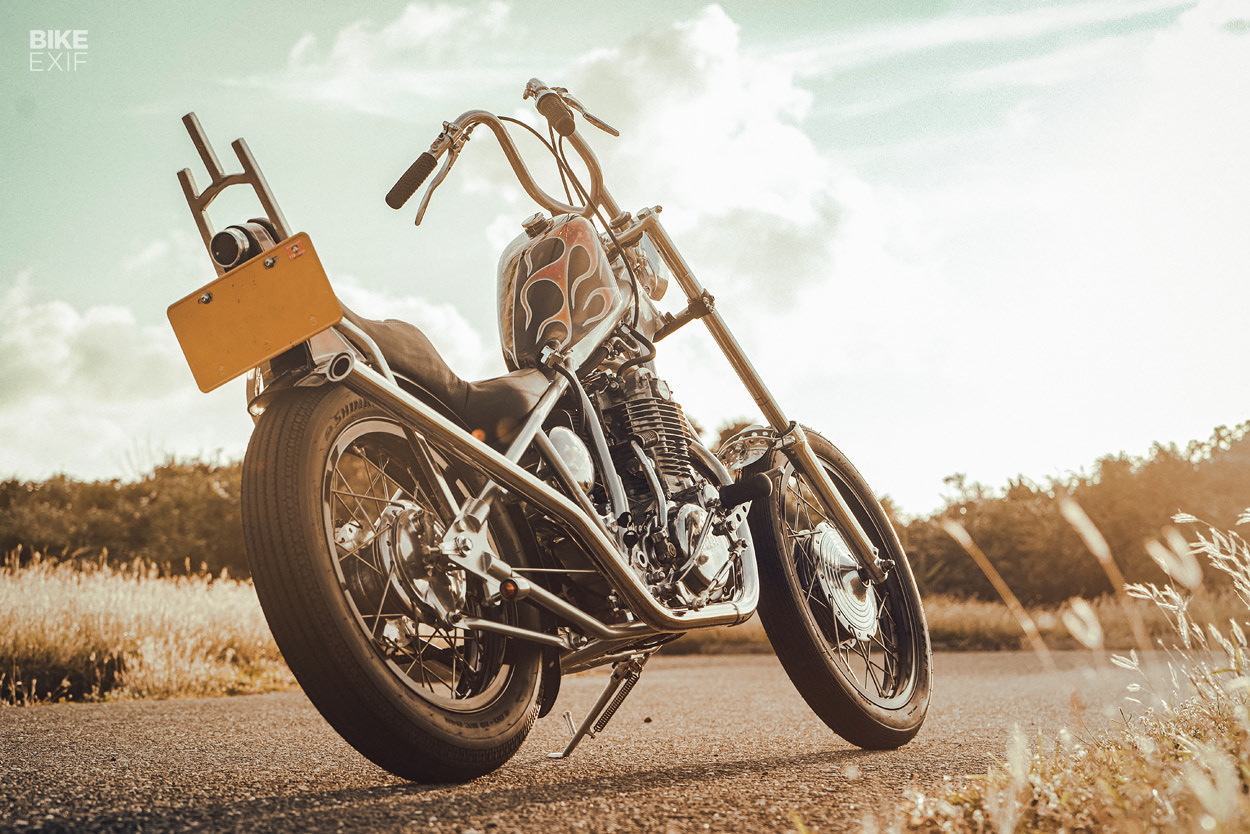