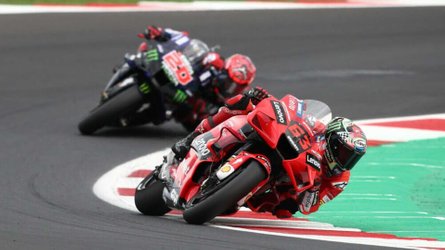 Following the emergence of COVID-19, MotoGP adjusted the 2020 schedule to 13 rounds held at European circuits. Fans rejoiced when international venues returned on the 2021 provisional calendar. However, the celebrations were short-lived.

In May, 2021, Dorna Sports officials canceled the Finnish Grand Prix before the Japanese Grand Prix met the same fate in June. July saw Australia and Thailand removed from the schedule before MotoGP wiped out the Malaysian GP in August and the Argentine GP in September. Out of the 20 rounds included in the 2021 provisional schedule, the series canceled 6 appearances, with Qatar and the U.S. hosting the only non-European events.

Now, a leaked version of the 2022 MotoGP provisional calendar shows that the series has even greater ambitions for next season. While MotoGP hasn’t officially confirmed the 2022 schedule just yet, the dates align with past calendars and reports coming out of Dorna’s camp. With 21 races on the docket, 2022 is scheduled to be the longest Grand Prix season in history. That’s if COVID-19 cooperates, of course.

As usual, the season will start under the Losail Circuit lights in Doha, Qatar. From there, the paddock will travel to the new Mandalika Streets track in Indonesia on March 20, 2022, before heading to Termas de Rio Hondo in Argentina and the Circuit of the Americas in Austin, Texas. The teams will then embark on the European leg starting with the Portuguese GP on April 24, 2021. The Spanish, French, Italian, Germany, Dutch, and Finnish Grands Prix will follow before the teams get a month-long summer break.

On August 7, 2021, Great Britain’s Silverstone raceway will kick off the second half of the season. Rounds at the Red Bull Ring (Austria), Aragón (Spain), and Misano (Italy) will round out the main European leg. On October 2, 2021, Motegi will host the Japanese GP before the paddock heads to Thailand, Australia, and Malaysia throughout the month. Of course, the teams will return to Europe, wrapping up the 2022 season at the Valencia GP (Spain).

While us fans won’t mind additional races on the calendar, the extended season could have implications on rider health and the title chase. Until now, MotoGP’s longest season consisted of 19 rounds (2019). With two extra race weekends on the calendar, 2022 will be a test of each rider’s year-long endurance. After a season without rounds in Asia or Oceania, it’s encouraging to see such an extensive schedule. We just hope the global pandemic and rider health don’t play a major factor as a result.