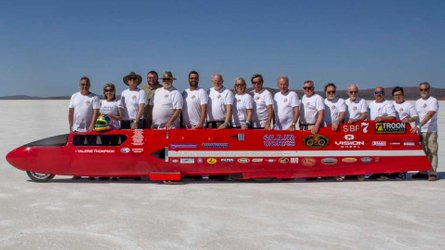 Land speed record holder Valerie Thompson knows a thing or two about racing. Before capturing 10 land speed records on two continents, Thompson was a competitive drag racer. She even earned the title of the “world’s fastest female motorcycle racer” after she set a 328-mph in 2018. That same year, Thompson crashed at 363 mph, prompting her crew to pull her from the wreckage.

While that incident increased the driver’s confidence in her crew, Thompson’s BUB 7 Motorcycle Streamliner team hasn’t been the same most recently.

“We lost some essential crew members over the last few months,” noted Thompson. “The remaining crew contacted me late last week with the sad news they had quit and removed all their tools from the Team 7 Racing shop. Without this ‘super crew,’ I’m highly doubtful about the performance potential of the BUB 7 to recapture the world’s fastest motorcycle title. More importantly, I’m concerned for my safety. These are not just my teammates—they’re my guardian angels.”

Many departing members, including Thompson, cite a loss of confidence streamliner designer Denis Manning. Thompson has other irons in the fire, however. The Sturgis Motorcycle Hall of Fame inductee will still pilot the Marlo Treit dual-engine Target 550 project. Thompson hopes the 43-foot, 9,000-pound streamliner will propel her past Tom Burkland’s 415-mph World Record from 2008.

With Thompson’s departure, she also takes a majority of the BUB 7 team’s funding. Luckily, “America’s Queen of Speed” has other endeavors in the works, but the world-class racer knows that her former BUB 7 teammates aren’t as fortunate.

“While I’m disappointed I won’t be setting the fastest motorcycle record with Team 7 Racing, I’m heartbroken the crew won’t see the results of their 36 months of painstaking rebuilding work. Each of them has volunteered countless hours in this quest. They deserve better,” concluded Thompson.