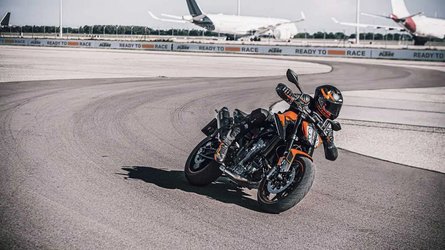 KTM, Husqvarna, and GasGas parent company Pierer Mobility Group released some preliminary numbers ahead of the full release of its 2021 Annual Report, and things are once again looking up for Team Orange. The company says this marks the 11th year in a row that it’s set a new sales record for itself.

What kind of numbers are we talking about? Pierer sold a total of 332,881 motorcycles worldwide in 2021, which represents a sales volume increase of 23 percent over 2020, when it sold 270,407 motorbikes. Geographically, sales broke down to about 120,000 units sold throughout Europe, with the remaining 210,000 sold in all the other markets of the world.

It’s worth remembering at this point that in 2020, Pierer’s sales were slightly down as compared to 2019, when it sold 280,099 bikes. Now, clearly there were pandemic-related challenges that hit everyone in 2020. However, comparing those figures only makes 2021’s results look even better, since they also represent gains over 2019.

Back to the 2021 numbers, and it seems that North America, India, and Australia warranted callouts by name in Pierer’s statement as the primary markets responsible for 210,000 units sold. Notably, Pierer didn’t break that number down in any further detail at this point. Since the 2021 Annual Report is not yet available, presumably greater details regarding individual geographic regions will be accessible once it’s released—preliminary key figures are scheduled to come out on February 1, 2022.

Pierer has also been concentrating on both pedal bicycles and e-bikes, as it moves to position itself more broadly across the span of mobility platforms. In this area, both overall bicycle and e-bike sales rose as well. Pierer’s brands here include Husqvarna, R Raymon, and GasGas, which together sold 102,753 bicycles worldwide in 2021. That’s up from 73,277 sold in 2020, which represents a sales increase of 40 percent. It’s particularly worth noting that e-bike sales made up 76,916 of the units sold in 2021—which by itself is greater than the total number of bicycles of all types sold by Pierer in 2020.