Electric mobility boomed in 2021. While Energica continued to grow its presence in the consumer market, Dorna announced that Ducati would take the reins to the MotoE series in 2023. KTM even announced a partnership with German battery company Varta as it develops its Husqvarna and KTM electric projects.

“We are assuming that with 48-volt electrics up to A1 class, that is 11 kilowatts or 15 hp, a lot will become electric in the next ten years, especially in Europe, ” Pierer told Speedweek. “That applies to scooters and mopeds. The whole two-stroke engine will go away. Everything that concerns motorized two-wheelers over 48 volts is going in the direction of e-fuels. There are very clear development plans between the manufacturers.” 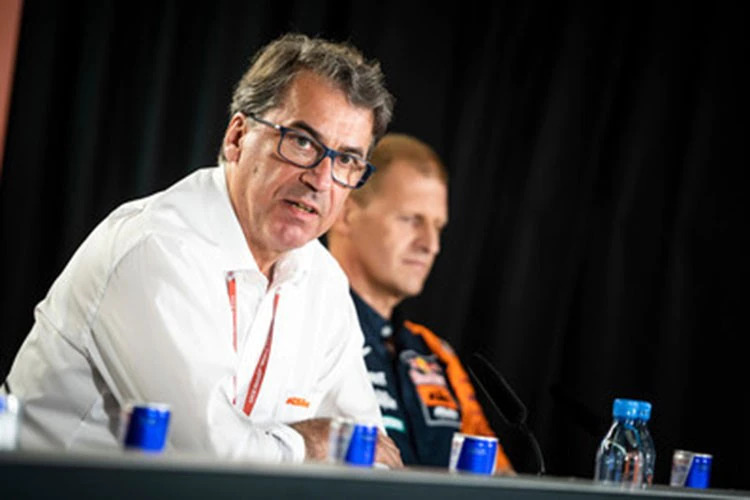 Of course, most motorcycle racing falls into the “over 48 volts” category, and Dorna announced plans to integrate e-fuels in November, 2021. Under the plan, all FIM Grand Prix World Championships will utilize 40-percent non-fossil fuels by 2024. In 2027, the Grand Prix paddock will transition to 100 percent alternative fuels. Pierer sees this as evidence that internal combustion engines will live on well past the next decade.

“We can still drive with combustion engines forever,” Pierer explained. “Electromobility is nonsense that is pushed by politically uneducated politicians. For a MotoGP motorcycle that drives a racing distance on 20 liters of fuel today, you would need a 500 kg battery to achieve comparable performance and range and to create the same energy density.”

However, Pierer hedges his bet as well, leaving the door open for the potential development and growth of high-powered electric motors.

“Until 2035, I see no substitute for the combustion engine in GP sport. And what will happen to the millions of existing combustion cycle machines? The synthetic fuel is the solution, not the electric drive. Because this fuel is CO2-free.”

While Pierer’s statements make waves, we also have to acknowledge that emissions regulations and consumer habits have shaped MotoGP in the past. With the two-stroke production motorcycles dying out in the mid-’80s, Dorna ushered in the MotoGP four-stroke era in 2002. Only time will tell if all Grand Prix racing goes electric in the distant future, but alternative fuels should keep our fire-breathing monsters around for some time yet.