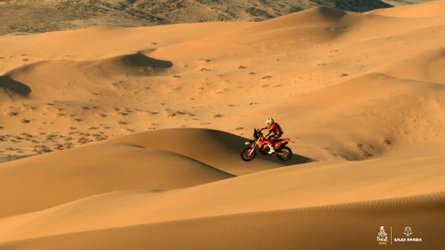 Stage 11 marks the second-to-last stage of the 2022 Dakar Rally, but overall results are far from decided following its conclusion. Remember that new “wild card” rule that Dakar stewards have in place for 2022? It’s the rule that allows competitors to rejoin after a technical failure, with a significant time penalty. It’s how Danilo Petrucci was able to rejoin after a DNF on an early stage—before he went on to win his first-ever Dakar Rally stage later in the event.

That rule just came in handy again, this time for KTM’s Kevin Benavides. If you’ll recall, on Stage 10, the 2021 Dakar Rally champion in the motorbike category retired due to a technical problem. However, due to the rule change in place for 2022, he was able to come back on Stage 11 and also achieve the fastest stage time out of the remaining pack of riders.

Of course, that means the overall motorbike rankings for the 2022 Dakar Rally shifted yet again. With just one stage left before the event is over for the year, Sam Sunderland is back on top, closely followed by Honda’s Pablo Quintanilla. Matthias Walkner is right on Quintanilla’s heels in terms of time, with less than a minute separating them. Yamaha’s Adrien van Beveren is currently fourth in the rankings, and Honda’s Joan Barreda Bort is in fifth place.

Just one stage remains before the curtain will drop on this year’s Dakar Rally, and all will be decided. Stage 12 runs from Bisha to Jeddah and is 680 kilometers (just over 422.5 miles) in total, of which 164 kilometers (just under 102 miles) is the special stage. This stage won’t have much in the way of dunes, but there’s still plenty of sand—and plenty of chance for the riders to showcase their skills.