Back in February we revealed Kawasaki’s patents for a tilting three-wheeled sportbike, and while the idea seemed far-fetched at the time, a new image on an official Kawasaki document appears to show exactly that machine.

The earlier patent showed a bike with a conventional frame—appearing to be from the supercharged Ninja H2, though the drawings were stylized and oversimplified—and a system of twin front swingarms, each holding their own wheel, with their pivot ends bolted to a separate subframe mounted on the lower front of the engine. Suspension came from a single shock, mounted horizontally across the bike between the front swingarms, with rockers converting vertical movement of the swingarms to lateral movement of the spring/damper assembly. The shock and its linkage setup hung from the standard steering head of the normal motorcycle frame.

The setup meant that the bike could lean without compressing the front suspension—if one front swingarm rises, the other drops—but if both front wheels move upward simultaneously, over a bump or under braking, the spring gets squeezed.

Weirder still was the bike’s steering. One handlebar is connected to each wheel via a rigid strut going straight from the bar to the front hub on that side. The system means the steering would be very direct addressing complaints of remoteness that have previously plagued bikes with swingarm-style front suspension and complex steering linkages. However, it also means the bars move up and down with the wheels, so in a corner the bars, and your hands, would remain almost parallel with the road surface as the rest of the bike leans. A simple pivot linkage means both front wheels turn together.

Kawasaki previewed this steering and suspension system on the Concept J back in 2013, so it’s clearly an idea that’s been knocking around for a while. 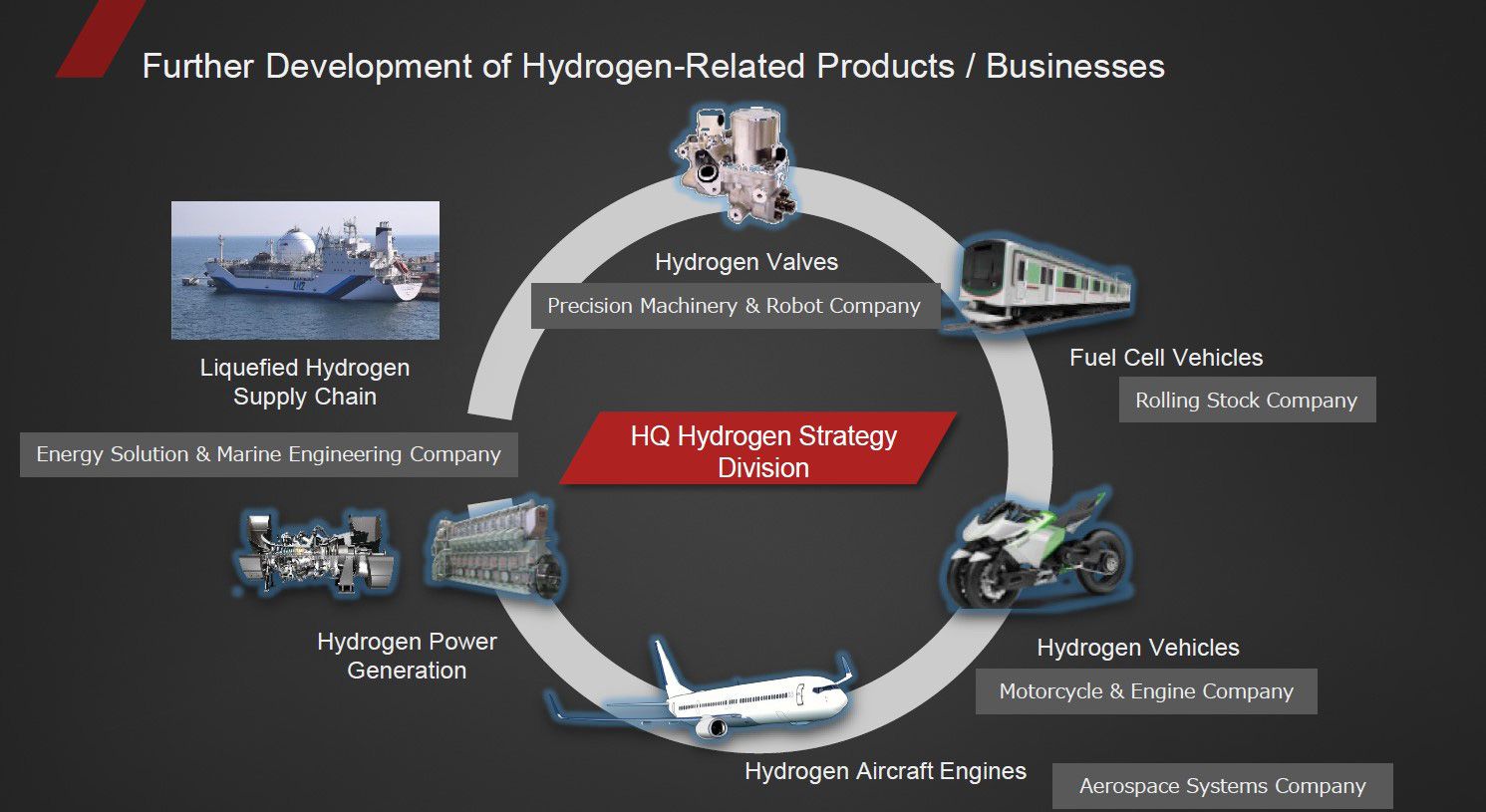 A recent document of Kawasaki’s future plans showed an image matching the earlier chassis with a three-wheel arrangement. (Kawasaki/)

February’s patent might have remained just an on-paper idea, but more recently Kawasaki published a document about its progress toward environmental improvement that included a very small, low-resolution image of a previously unseen motorcycle that matches the patent’s three-wheeled layout and Ninja H2-derived chassis.

The picture appeared on a page about Kawasaki’s future development of hydrogen-powered vehicles but appears to have been used simply as a generic, futuristic bike, as there’s little indication that it’s actually hydrogen powered. Although low resolution, elements of the bike in the picture are familiar, including the single-sided swingarm from the Ninja H2, and the twin-swingarm front suspension and three-wheeled layout is clear to see. We’ve done our best to enhance and enlarge the image here but given how small the original is there’s clearly a lot of detail that can’t be seen. 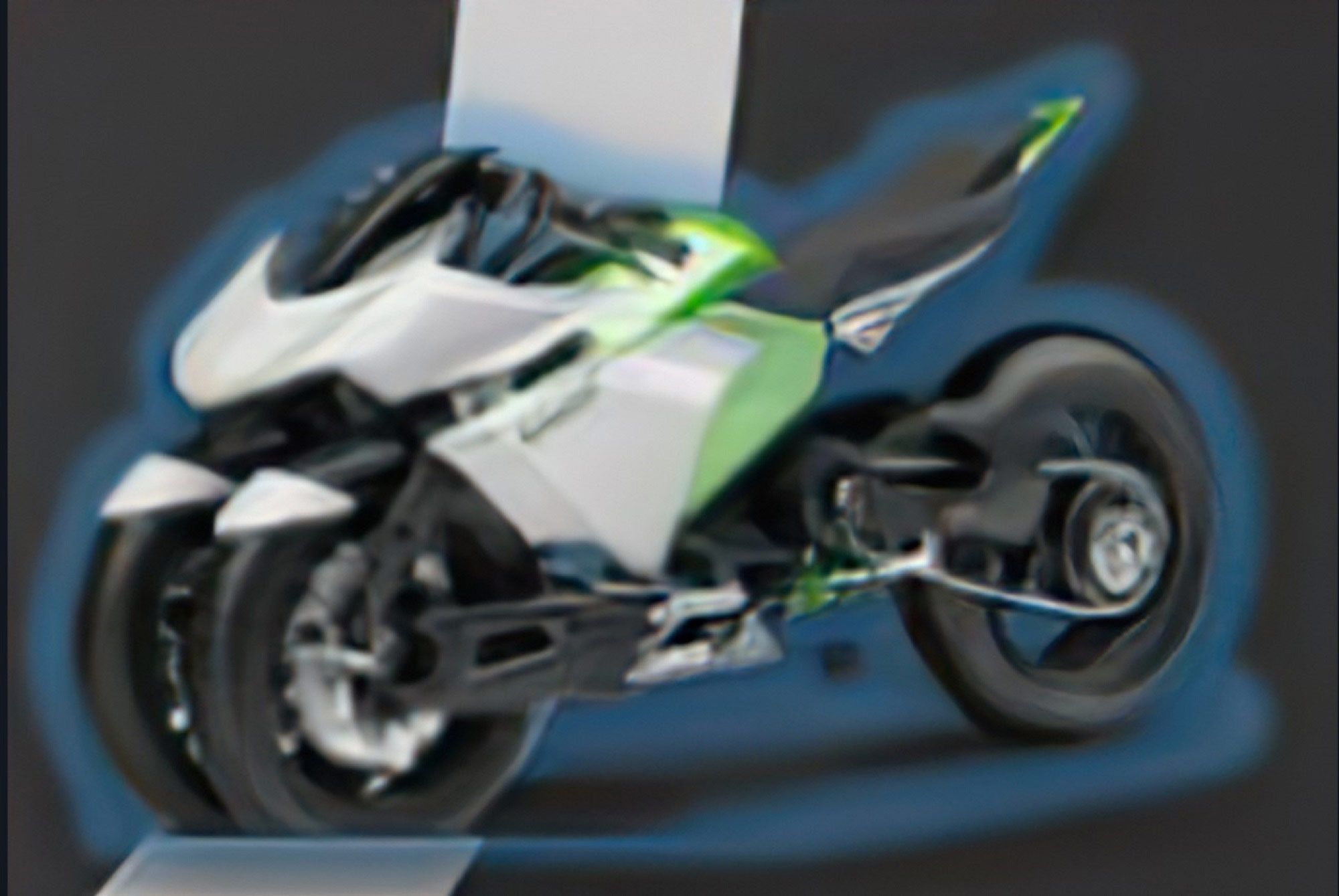 The enlarged image is too vague to confirm as a production model; it’s more likely to be a new concept bike. (Kawasaki/)

Although the image might be a rendering or a drawing rather than a photo—it’s impossible to be sure, given its poor quality—the use of an existing swingarm hints that it might well be a real machine. And if there’s the H2′s swingarm, then the rest of its frame and its supercharged four-cylinder engine might well also be hiding behind the fairing. That would certainly bring it into line with Kawasaki’s patent in February.

Our guess is that it could be a new concept bike, developed as a more real-world follow-up to the 2013 Concept J, and might originally have been intended to get unveiled at the Tokyo Motor Show—always the favored event for the debut of futuristic Japanese designs. Held every two years, the Tokyo show was to have taken place this month, but the 2021 running has been canceled as a result of the COVID pandemic, potentially leaving a lot of concept bikes from Japan’s Big Four firms with no obvious platform to be launched on.

Use of wire rope barriers to be terminated in Northern ...