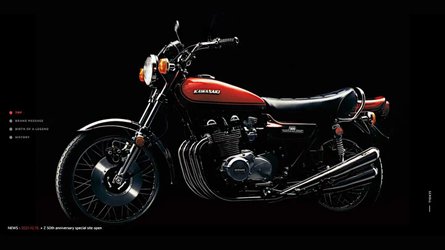 Kawasaki has a major anniversary coming up in 2022: The 50th anniversary of the iconic Z1. As we learned back in November, 2021, Team Green has big plans in store to celebrate this momentous occasion. While we’re sure that most of those plans are still under wraps in the back half of December, 2021, Kawasaki did unveil one nice thing for its fans worldwide.

Eager to not miss out on a single second of its yearlong celebration, Kawasaki has already launched a dedicated Z50th Anniversary microsite. The user interface is smooth and easy to use, and is a nice digital repository of the Z1’s story so far.

Scroll down the page, and you’ll see the burnt orange Z1 light up, then get closer, and then fade to black. Next, you’ll see select closeup slides of details on the bike, including the engine and badges. Keep scrolling to learn more about the inception of the Z line, including the simple explanation that Z is the ultimate letter of the alphabet, therefore Z should represent Kawasaki’s ultimate motorcycle.

As we mentioned, this microsite seems to be aimed at a wide variety of Kawasaki Z1 fans worldwide. So, even though it’s hosted on Kawasaki’s Japanese-language website, this particular site is available in both Japanese and English, to reach a wide variety of Z fans.

Keep scrolling to see (and read about) important milestones from 1972, the year the Z1 was first introduced to the world. Motorcycling press around the world showered the Z1 with superlatives, with Motorcyclist even going so far as to say that “Kawasaki has redefined high performance.” Once you come back from reading about this year, there’s a side-scrolling presentation of design sketches, diagrams, and eventually world press clippings from the bike’s debut.

The final section is all about the Z1’s 50-year history, and if you love looking at photos of your favorite bikes on a very nicely-designed interactive timeline, then this is the section for you. At each point, you can also easily expand each photo for a closer look at your favorite details. Both street and racing bikes are included, and Kawasaki didn’t skimp on its archival materials here. There’s a rich selection of imagery to be had here, spanning all 50 years of the Z1’s evolution so far. What are you waiting for?