Kawasaki Is Working On A Supercharged Hybrid Motorcycle

Kawasaki has been experimenting with hybrid motorcycles for a while. None of them are in production, but we’ve seen several patents that the Japanese manufacturer has filed regarding the technology. The most recent one, however, suggests the addition of another Kawasaki technology – a supercharger. More specifically, the patent is for a motor that will drive both the motorcycle and the supercharger’s impeller.

Motorcycle.com mentions that Kawasaki has filed a trademark for “E-BOOST” in Japan for various uses. The ‘E’ most likely stands for electricity, while the ‘Boost,’ we assume, suggests a supercharger. This could imply that this new e-supercharger technology is past the conceptual stage and that we may very well see a prototype shortly.

Kawasaki has multiple supercharged models, including the H2, H2R, H2 SX, and Z H2. Unlike these models, where the crankshaft drives the supercharger via a chain, the new patent reveals that an upcoming motorcycle will feature an electric motor to drive the impeller. In theory, this should also get the supercharger to work instantly.

The patent also reveals that the technology could be used in combination with a gas-powered engine, enabling the ability to switch between electric and hybrid modes. Depending on the speed, acceleration, gear selection, and battery level, the bike will switch between modes automatically or let you do it manually.

A patent application doesn’t necessarily mean that the technology in question will see the light of day. Still, the trademark filing does suggest that Kawasaki has made some progress in developing the project. Earlier this week, Kawasaki announced plans to expand its factory in the USA, with “increasing investments in new product development which will be available shortly, especially in the growing MULE, ATV and JetSki markets as well as innovative new street motorcycles, our new electric, hybrid, and hydrogen power source projects and off-road motorcycles.” 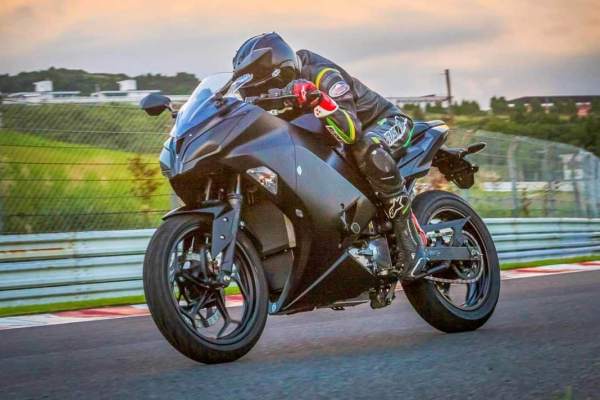