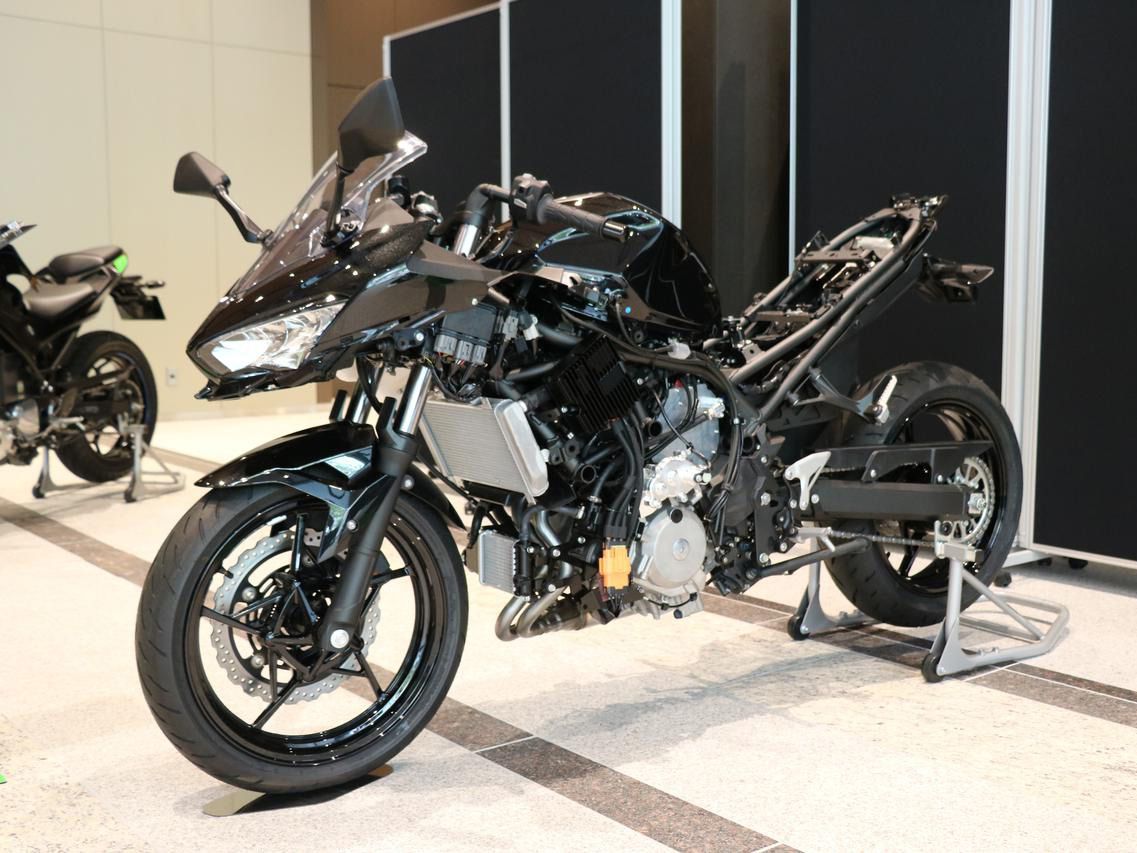 Last year Kawasaki announced plans to have “more than 10″ electric or hybrid bikes on the market by 2025, and a set of new patents gives further insight into how the company hopes to achieve such a lofty goal. The firm has already shown a prototype hybrid motorcycle featuring a twin-cylinder engine bolstered by a 48-volt electric motor, allowing it to run in a variety of modes. It would operate as a conventional gas-powered machine while cruising with the combustion engine in the most fuel-efficient part of its rev range. In cities, the bike could switch to all-electric power to minimize pollution, and when you wanted the best performance, both the combustion engine and the electric motor would run together to maximize power and torque.

It’s basically the same system dozens of hybrid cars already use, seamlessly switching between power sources to improve economy and reduce emissions while their drivers barely notice. Kawasaki appears to be—quite sensibly—following in the footsteps of four-wheeled hybrids to enable rapid adoption of the technology across its range. 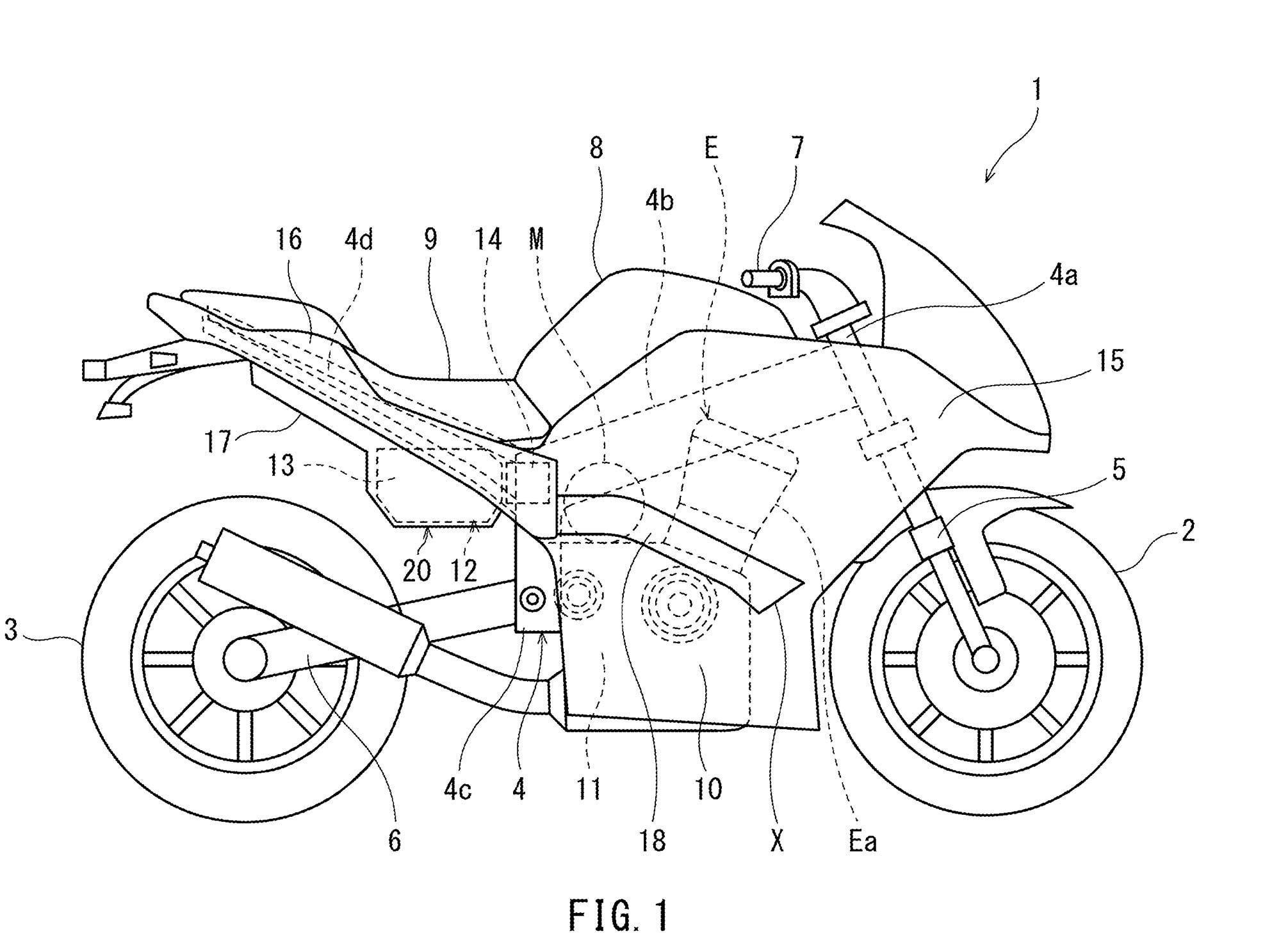 The latest patents show how the hybrid system could be utilized across multiple existing models. (Japanese Patent Office/)

But the chances of developing 10 entirely new hybrid or electric bikes from scratch before a deadline that’s less than three years from now are slim—particularly given uncertainties over the potential sales success of such machines. However, car companies have shown that it’s relatively easy to introduce hybrid versions of existing, conventional models—vastly reducing the number of unique components they need while simultaneously making them feel more familiar for their customers. Kawasaki also appears to be taking the same route.

Newly published patents now reveal how Kawasaki’s hybrid system could be adopted across multiple models relatively easily. All indications are that Kawasaki’s first production hybrid will follow the pattern seen in the prototype shown last year. It used a parallel-twin engine borrowed from the Z400/Ninja 400 (also available as a visually identical 250cc version), mounted in a simple steel frame. The 48-volt lithium-ion battery, which is only around the size of a small conventional car battery yet is much lighter and more powerful, is fitted under the seat, but other tweaks are also needed to accommodate this setup. 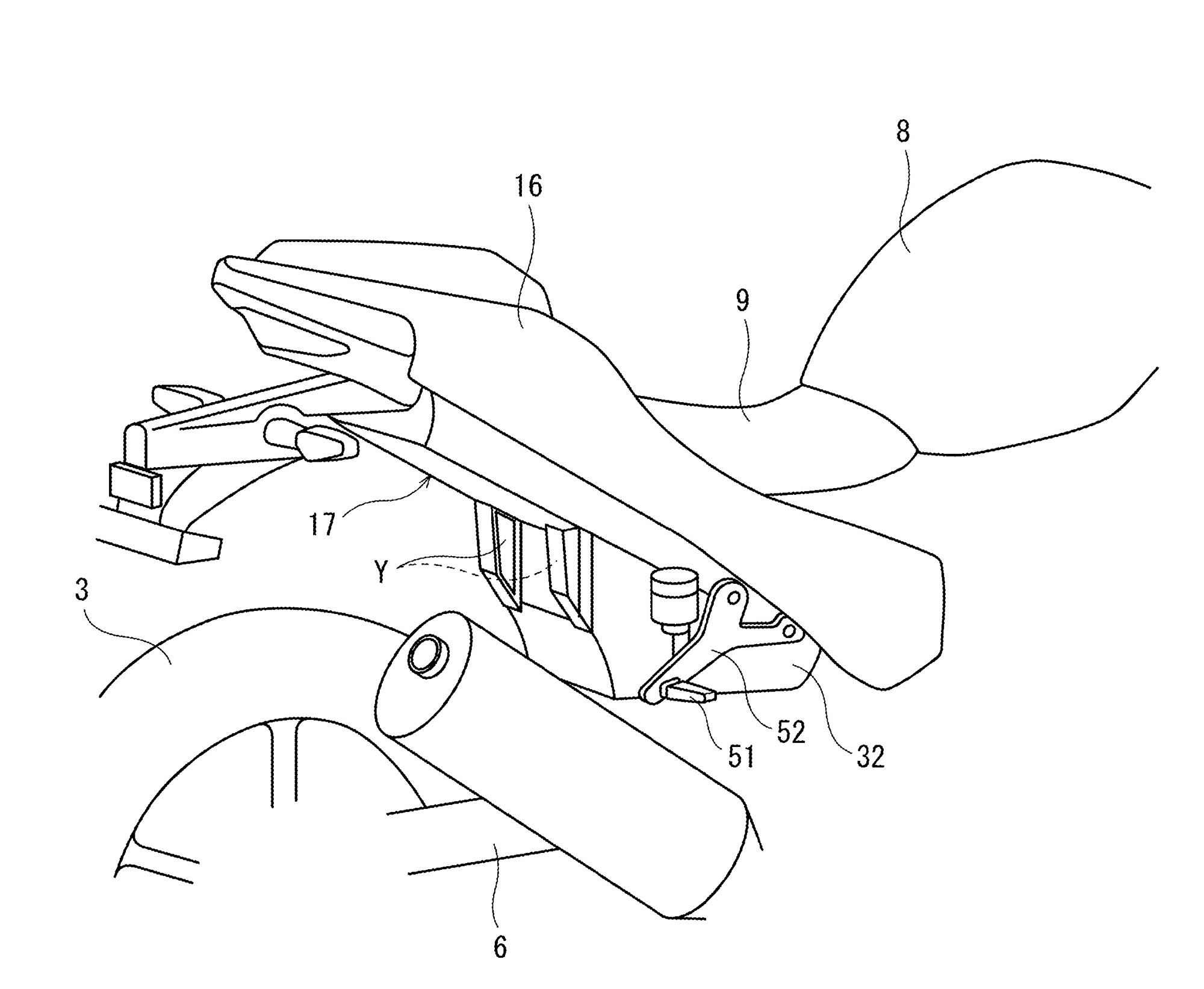 The latest patent involves cooling solutions for the underseat battery, which include exhaust ducts to draw heat out. (Japanese Patent Office/)

The first patent illustrates how the battery is kept cool. Unlike some of the more extreme electric bikes on the market, the Kawasaki design has an air-cooled battery, sacrificing some of the performance gains found in liquid-cooled designs in favor of lower cost, lighter weight, and simpler construction. Under the seat, the battery might normally be starved of airflow, but the new patent shows how a faired hybrid (like last year’s prototype) will have ducts to channel air from the leading edge of the lower fairing, around the combustion engine and into the underseat battery container. Exhaust ducts in the back of the battery tray allow the air to escape, along with the heat from the battery pack.

The second new patent shows Kawasaki’s solution to a practical issue created by the position of its electric motor. The firm’s hybrid design places the electric motor above the bike’s conventional, six-speed transmission. That transmission allows the combustion engine to operate just like a normal bike’s, with an additional clutch to engage or disengage the electric motor. An electronic shift system, along with a quickshifter, means bar-mounted switches can be used to change ratio rather than the foot pedal, also introducing the possibility of an automatic mode to help make the switch between gas and electric power seamless. The electric motor’s position means the system could be used on virtually any bike with a conventional transverse combustion engine. The prototype uses a twin, but a four-cylinder or a single could adopt the same system with ease. However, the position of the motor means it clashes with the normal position of the upper rear suspension mount on a bike with a monoshock setup.

Related: Where Are The Hybrid Motorcycles?

The other new patent provides the solution: to reinforce the motor and use it as the shock mount. (Japanese Patent Office/)

The solution is simply to allow the motor to act as the shock top mount, courtesy of a cast alloy plate that connects it to the frame. That casting, which is heavily braced, incorporates both the top bracket for the shock and, at its lower extremity, the eye that the rising-rate linkage bolts to.

The additional patents combined with the prototype design show how Kawasaki can easily and inexpensively introduce hybrid tech across multiple models. (AutoBy/)

The growing pile of patent documents, along with Kawasaki’s official prototype hybrid bike, shows that the company is in a strong position to introduce the technology across an array of bikes with minimal expense. It’s just as easy to see the setup used on a high-end superbike—with the electric motor acting as a performance boost rather than focusing on emissions—as on a city-bound commuter. Simultaneously, the Kawasaki hybrid system eliminates the range anxiety that’s still proving a huge barrier to the adoption of pure-electric bikes, and by sharing parts across multiple models and using lower-cost tech like the air-cooled battery, the resulting machines should be able to dodge the high MSRPs many electric models are saddled with.

Scuderia Cameron Glickenhaus Hydrogen Boot Is Ready for the Baja 1000