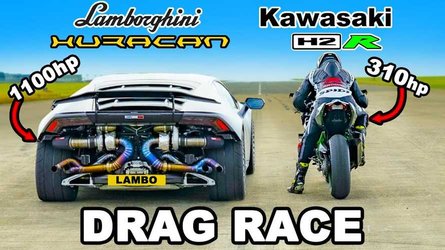 If you’re a spectator, watching racing is usually the most fun when vehicles are pretty closely matched. Some of that’s down to the vehicles involved, but some of that’s also down to who’s piloting them. In any case, it’s not really clear whether a stock Lamborghini Huracan would have much of a hope when pitted against a Kawasaki H2R at a drag strip.

We’re not just talking about any old Lamborghini Huracan in this drag racing challenge, though. U.K. car channel CarWow likes to set up all kinds of drag races, and it occasionally pulls in bikes, in collaboration with Bike World. This time around, CarWow lined up a modified Huracan, outfitted with twin turbos, as well as a full titanium exhaust and appropriate ECU mapping to make everything play nicely together.

All told, this Huracan makes 1,100 horsepower, and produces 1,000 newton-meters (or about 737.56 pound-feet) of torque. It weighs 1,450 kilograms (just a hair under 3,197 pounds), has four-wheel drive, and comes equipped with a seven-speed dual-clutch automatic gearbox. The twin-turbo setup was professionally installed by JM Imports, which is a specialist in the field.

The Kawasaki H2R, meanwhile, is bone stock as it came from Kawasaki, because it is bonkers enough right out of the box. It makes 310 horsepower and 165 newton-meters (just under 121.7 pound-feet) of torque. Total curb weight is 214 kilograms, or just under 471.8 pounds.

Of course, one of the most important things to know when a pair of vehicles sidles up to the starting line at a drag strip is how their power-to-weight ratios stack up. The Huracan boasts 759 horsepower per tonne (that’s a metric ton, which is 2,204.6 pounds). That’s certainly impressive, but what about the H2R?

Just to amplify exactly how bonkers a stock H2R’s power is, the CarWow folks opted to include the weight of rider, Chris North, in this calculation. This ex-BSB racer reckons he weighs 80 kilograms (just over 176 pounds) when fully kitted out in his race leathers. Thus, the power to weight ratio of the H2R is a modest 1,054 horsepower per tonne.

Power isn’t the only story in a drag race—it’s also in how well you start, and how well you get that power to the ground. The pair go through multiple heats in this video, beginning with standing starts and moving on to rolling starts, demonstrating where and how the power of both vehicles best expresses itself. Quarter-mile results differ from half-mile results. As you might guess, one of the H2R’s biggest challenges is simply not wanting to do the entire race straight up at 12 o’clock the entire time.

If you enjoy seeing this race, there’s also a behind-the-scenes video over on Bike World’s channel for a little peek behind the curtain.

Against all odds: A Suzuki DR-Z400SM by oneYedeer