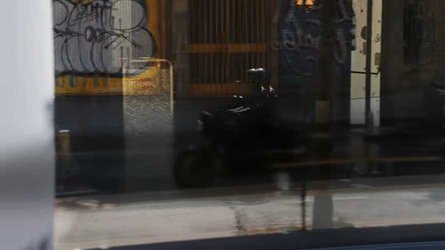 Kawasaki says that it plans to unveil the Z650RS whatever bike it’s been teasing in its Retrovolution videos on September 27, 2021. Team Green released its third extremely short glimpse into what’s coming on September 21, 2021. Presumably, the OEM wants to make sure we all keep our eyes on the ball they’re about to toss our way next week.

While the second teaser gave us a long, lingering look at a classic Kawasaki Z650 (which was sold as the KZ650 in the North American market) in the background of one shot, we didn’t get to see the new Kawasaki model the teaser is about.

Meanwhile, in the first video, we only saw a small glimpse of a round mirror sticking up off its stem, presumably from the handlebars of the new bike. (I say “presumably” because we couldn’t actually see down that far. For all we know, Kawasaki could have had riders sitting on a mechanical pony outside a supermarket with a retro-style mirror bolted on for giggles.)

So far, Kawasaki bills this campaign as a “Retro-Evolution,” or “Retrovolution.” It’s riffed on its classic Z650. In this third video, we get a shaky, unclear glimpse at the right side of the bike, as reflected in some dark shop windows as someone rides past. Like the previous two, this teaser lasts 16 seconds—and only a few of them are taken up by even this very short, unclear glimpse of the bike.

Then, white text appears on a black screen that says “Join us on September 27th” before changing to the “Retro-Evolution => Retrovolution” animation. Finally, it ends on a solid “Kawasaki: Let the good times roll” closing statement.

It’s almost certainly the Z650RS, but it would be kind of hilarious if Kawasaki was doing some serious sleight-of-hand with these teasers, and instead unveils something completely unexpected on September 27, 2021. We doubt that’s the case, but it’d be a pretty amazing stunt if it did. Until next week!

Will This Harley-Powered Tiller Start After Sitting For 80 Years?