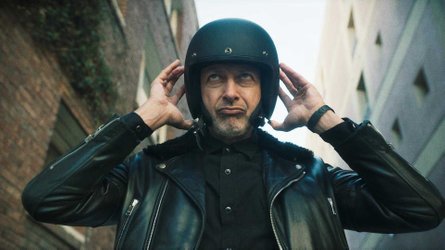 Finding the time (and resources) to explore new things that strike your interest is cool, but finding the time, energy, and money (at the same time) to do so can be a challenge. What if you’re, say, Jeff Goldblum, though? Should you happen to wake up one day and discover that you are, in fact, said American national treasure, then you might also find that you have an entire TV series devoted to helping you explore all the random interests you’ve given a passing thought to over the years. (If so, good for you!)

The World According to Jeff Goldblum is its name, and Disney + streaming is its game. In a season two episode that premieres on January 19, 2022, Goldblum spends his time diving into the world of motorcycles. For those unfamiliar, the entire point of the show seems to be Goldblum simply being himself, and exploring all kinds of things he doesn’t know a lot about in greater detail. There’s a crew along to record everything that happens, and then it’s edited into a show for our entertainment.

Goldblum’s first film credit came in 1974, but he learned to ride a motorcycle to appear in the 1975 Robert Altman film Nashville, in which he’s credited as a character called “Tricycle Man.” Ahead of the release of his 2022 foray into riding, Goldblum spoke to Autoweek about the experience.

“I did Nashville way back in 1973, ’74. And so, I took lessons because I’d never been on a motorcycle before then, except with my cousin once when I was 12 or something, riding around the block. That seemed exciting,” Goldblum told Autoweek’s Mark Vaughn.

“But for this movie, I was very motivated. I took lessons,” Goldblum continued. “I was living in Manhattan, and had a teacher and we drove around the streets of Manhattan. I was doing pretty well. Then I took a test. And the results came back once I went to Nashville. And it turned out I failed. I don’t know if you know that movie, at the end of the episode I drive one of those three-wheel things, which I also didn’t know how to drive. So, I had to learn how to do that down there. And then had a blast doing that.”

Since then, Goldblum said that he’s ridden a bike in maybe one other movie, but hasn’t owned one. Vaughn, however, suggested that he maybe think about a BMW CE-04—to which Goldblum readily agreed. We’ll link the interview in our Sources so you can read the whole thing.

In a separate interview with Autoblog, Goldblum had some advice for new riders, or those just thinking about maybe throwing a leg over. “I would say give it some careful thought and read everything you can, spend some time in a safe environment before you swing out, you know. And just make it as safe as you can, and learn everything about it. It seems that motorcycle riders know more than drivers of cars — they know more about the machine, because they might find themselves broken down and they’ve got to fix it,” he told Autoblog.