Home » Articles » Is Stuffing A Yamaha VMax V4 Inside A Kei Truck The Best Idea Ever?
Articles

Is Stuffing A Yamaha VMax V4 Inside A Kei Truck The Best Idea Ever? 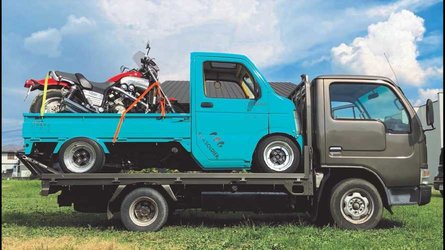 Have you ever dreamed up a completely bonkers, off-the-wall project? Maybe you’ve built it, and maybe you haven’t. The folks behind YouTube channel GooDSTocK are no strangers to building whatever vehicles they want. They’re located in Japan, so of course they have easy access to a whole bunch of models that may not be as readily available elsewhere, which they frequently feature on their channel.

This particular video is from GooDSTocK’s current series, wherein the guys are busy figuring out how to stuff a carbureted, 1990s-era Yamaha V-Max 1200cc V4 engine into a Suzuki Carry kei truck so they can do some drift racing with it. You know, as you do. Difficult? Sure. Impossible? As with most projects, that depends on what lengths you’re willing to go to in order to make it happen.

See, the most important thing to realize when diving into projects is this: Your skill level isn’t as important as your willingness to problem-solve and learn along the way. Funding for a project matters, too. However, if you’re willing to work on your project a little at a time as you have the money and bandwidth, that bit isn’t quite as crucial as the first part. I mean, some people like to take their time and enjoy the process, and can even take decades to finish a project. It’s all good!

Anyway, back to the V-Max Carry. Unlike a fireman’s carry, a V-Max engine is hefty enough that you’d better get a buddy to help you lift it. It’s most definitely not a job for a single person on their own, which is why it’s good that GooDSTocK is a small collective of people that work together.

From getting the engines out of both the V-Max and the Carry, to extremely anxiety-inducing steps like taking an angle grinder to the frames on both vehicles, having a few extra people check your work can theoretically also keep major mistakes from happening. Does it always work that way? Probably not, but it can’t hurt.

As of September 1, 2021, we know what GooDSTocK hopes to achieve with this build. The whole series isn’t up yet, though, so you may want to subscribe to see how it all develops.