Is Paris Planning To Outright Ban All Gas-Powered Two-Wheelers? 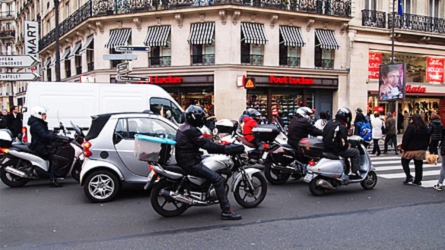 Paris has long been in the center of a tectonic shift in urban mobility. The city government recently enacted a mandate banning all motorcycles built prior to the year 2000. More recently, the city is cracking down on noise pollution. Radical solutions such as sound radars targeted specifically to loud vehicles are being experimented on. In the most recent development, it appears that the city may just outright ban gasoline-powered two-wheelers.

The city government recently conducted a consultation among its residents to find ways to reduce noise pollution in the city. Now, said consultation concluded on the week of January 10, 2022, and more than 142 new proposals with more than 26,000 votes were cast. One of which seems to be a rather extreme solution, and that’s the outright ban on gasoline-powered two-wheelers in the capital. Surely, this seems like an outlandish solution, as there are indeed several people who rely on their two-wheelers to make a living on a daily basis. It certainly wouldn’t be fair to single them out for the sake of addressing noise pollution.

Unsurprisingly, the proposal to ban gasoline-powered two-wheelers in Paris didn’t garner a unanimous vote. It did, however, get a majority vote with 944 votes in favor and 307 votes against it. Now, whether or not the city government will actually implement such drastic measures is still uncertain, but it certainly hints at the saddening notion that the end of the internal combustion-powered two-wheelers is much closer than we think—at least in Paris.

Personally, it’s hard to imagine that Paris would be taking such drastic measures to solve the problem of noise pollution. Now, of course, I don’t know the extent to which motorcycles and scooters are disrupting the peace and order of Parisians trying to go about their day-to-day lives. However, the proposed solution seems to be too harsh, as it doesn’t even bother to take into consideration what motorcycle and scooter users have to say. Nonetheless, nothing is set in stone just yet, as the proposal, as well as the other 141 proposals, will all be subject to a report in the Parisian noise reduction plan during next spring’s Paris Council.