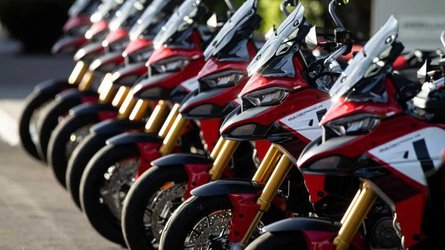 2021 was a watershed year for Ducati. By October the company already reported record sales in just three quarters of 2021 with 49,693 units sold. That was before Ducati unveiled new and returning models like the Multistrada V4 Pikes Peak, DesertX, and the heavily-updated Panigale V4.

After accounting for the last quarter of the year, the brand moved 59,447 units in all of 2021. That’s a new record for the 95-year-old company, which marks a 24-percent increase in sales over 2020 and a 12-percent bump over 2019 figures. While the record-setting numbers are exciting, the brand has even more irons in the fire for 2022 and beyond.

“2021 was a magical year for Ducati.” admitted Ducati CEO Claudio Domenicali. “We have delivered over 59,000 motorcycles, a number never reached in the company’s 95-year history, we have won the title of MotoGP Manufacturers World Champion for the second consecutive year and we have started the electric era of our company with the V21L prototype, which anticipates the bike that will race in the MotoE championship from 2023.”

“Sales grew double-digit in all the main countries, from the United States to Australia, where the new branch achieved + 50 percent,” noted Ducati Global Sales VP Francesco Milicia. “These results also represent the result of an extraordinary work aimed at the continuous improvement of the global sales network, both in quantitative terms, with 84 new dealerships, and in qualitative terms, focusing on the digitalization of processes and omnichannel.”

Among the top selling models, Ducati sold 9,957 Multistrada V4 units. The Scrambler 800 line was a close second at 9,059, and the all-new 2021 Monster was strong out of the gate with 8,734 units sold. Ducati may have experienced its most successful year yet, but that doesn’t mean it wasn’t hard-fought. The pandemic continued to impact supply chains and available resources. While those obstacles aren’t completely in the rearview mirror, the brand has plans to grow even more in the coming years.

“Supply chains have created delivery delays for which I want to apologize to all the Ducati fans, thanking them for their patience,” expressed Domenicali. “We are investing in an extremely ambitious growth path that will lead the company to further improve, even with the entry into new segments. With the DesertX we will have from this year a very attractive proposal for adventure fans, and other ambitious projects are currently in development.”