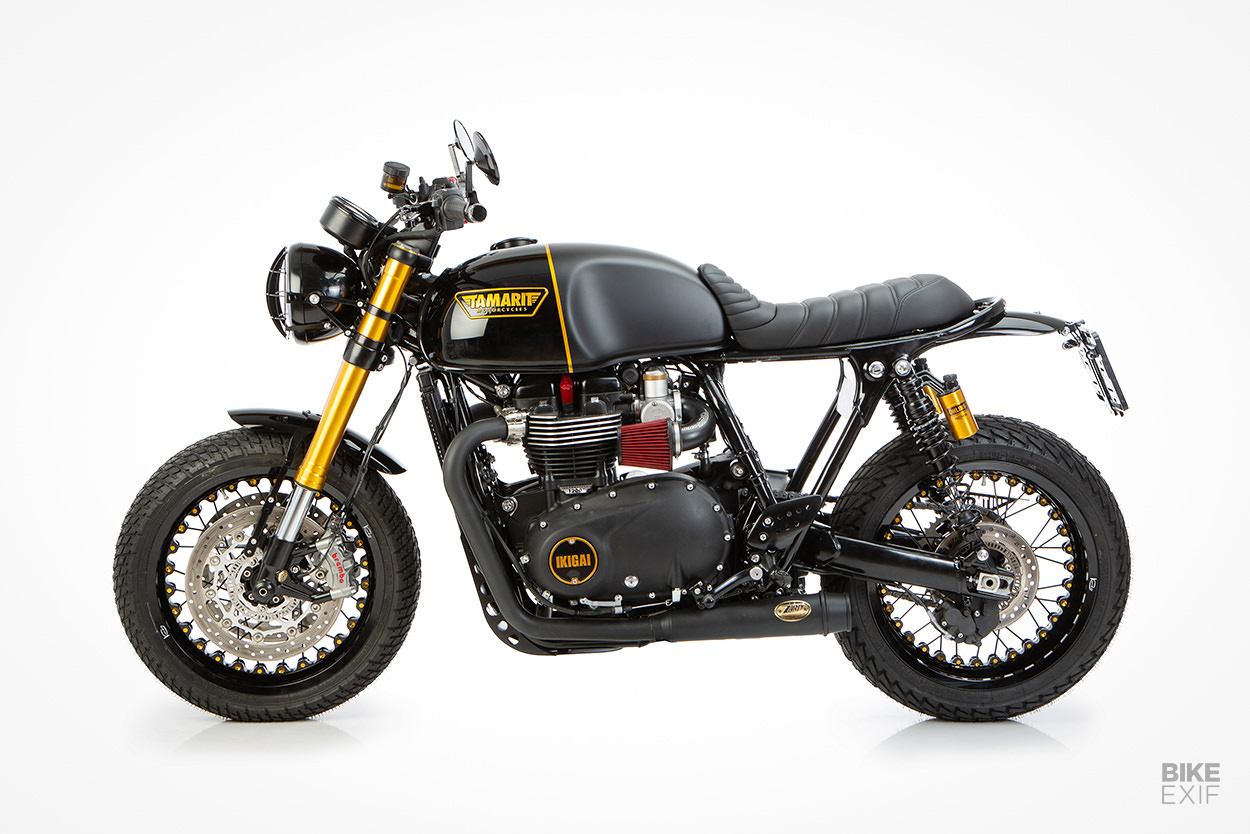 Modern classics are all about style, but the Triumph Thruxton RS boasts a healthy measure of sportiness too. Its parallel twin engine makes a respectable 103 hp and 112 Nm—plus it comes specced with fully adjustable Showa forks and Öhlins shocks, and twin Brembo brakes up front. So it’s the closest thing to a factory performance cafe racer you can get.

But cafe racers aren’t for everyone. As comfortable as the Thruxton is for its genre, some riders wish Triumph would pack the same features into a more roadster-like package. That’s what the owner of this Thruxton RS wanted—and the Spanish shop Tamarit Motorcycles obliged in spectacular fashion. 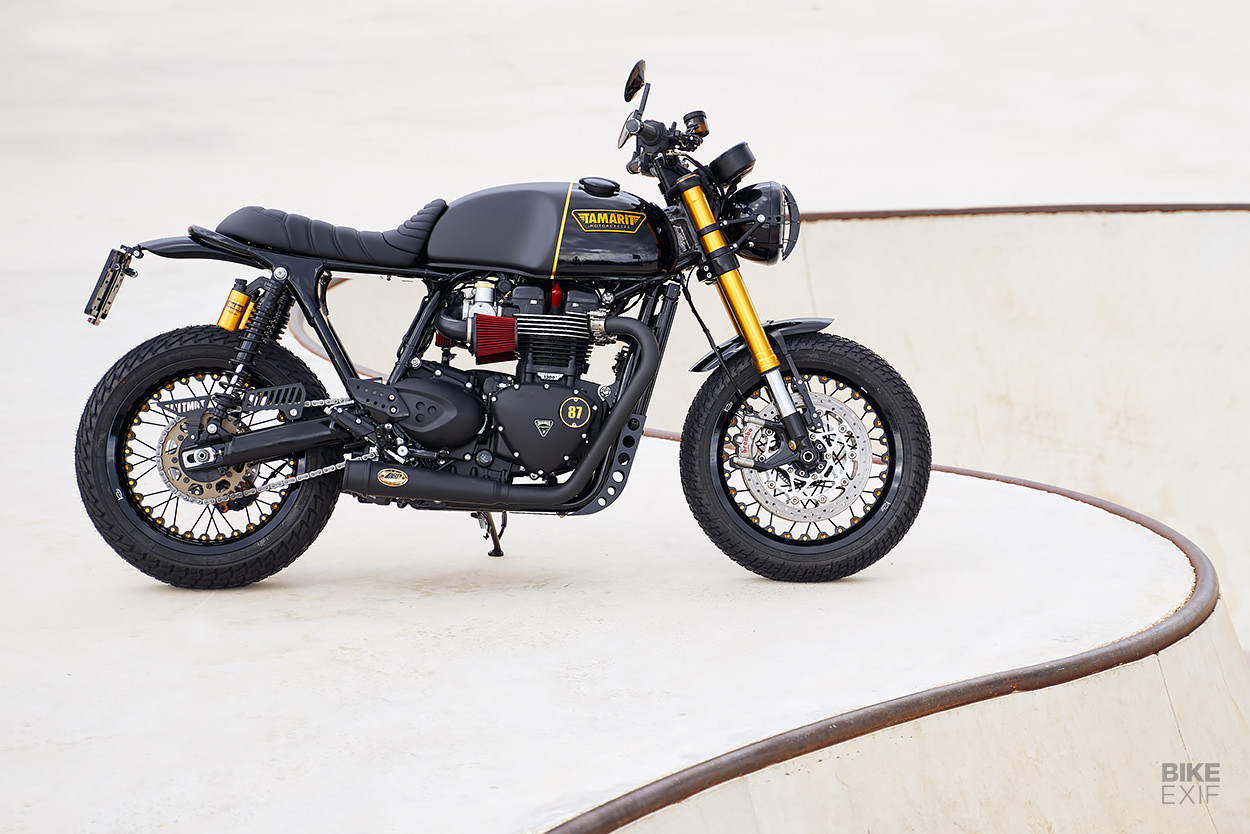 Tamarit has built its business on customizing Triumph’s modern classics, and their catalog is jam packed with bolt-on parts. But this is no paint-by-numbers build. Instead, it’s a beguiling mixture of off-the-shelf and one-off items, masterfully woven together to create a rowdy hybrid between a cafe racer, street tracker and supermotard.

They’ve dubbed it ‘Ikigai,’ after the Japanese concept of having a sense of purpose, or a reason for being. 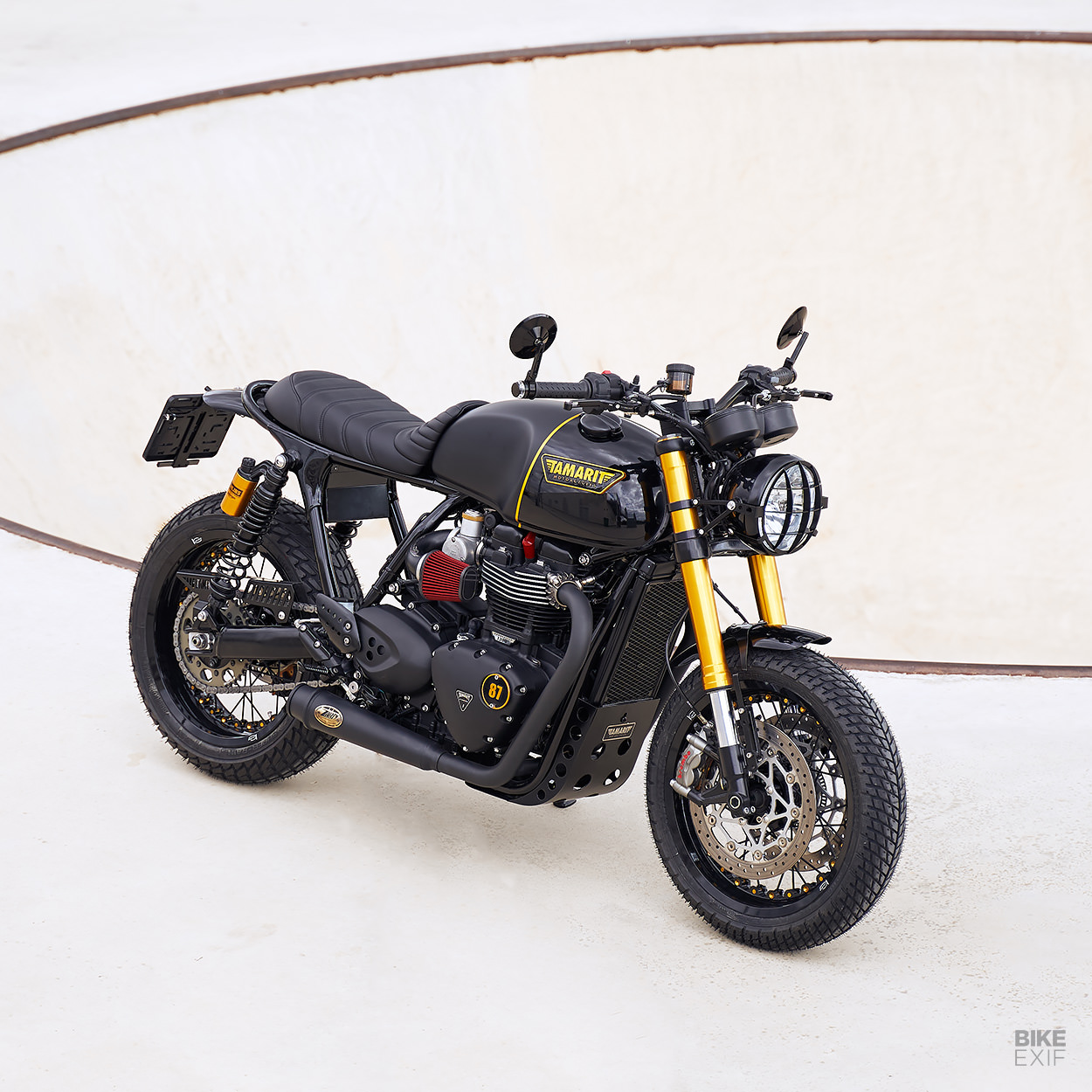 With good suspension and brakes out the box, there was little sense in messing with the Thruxton’s rolling chassis. Tamarit simply stripped and blacked out parts like the rear shocks and yokes, to better fit the overall color scheme.

They also swapped the wheels for a stunning set of tubeless Kineo hoops, and wrapped them in Heidenau K73 supermotard tires at the client’s behest. 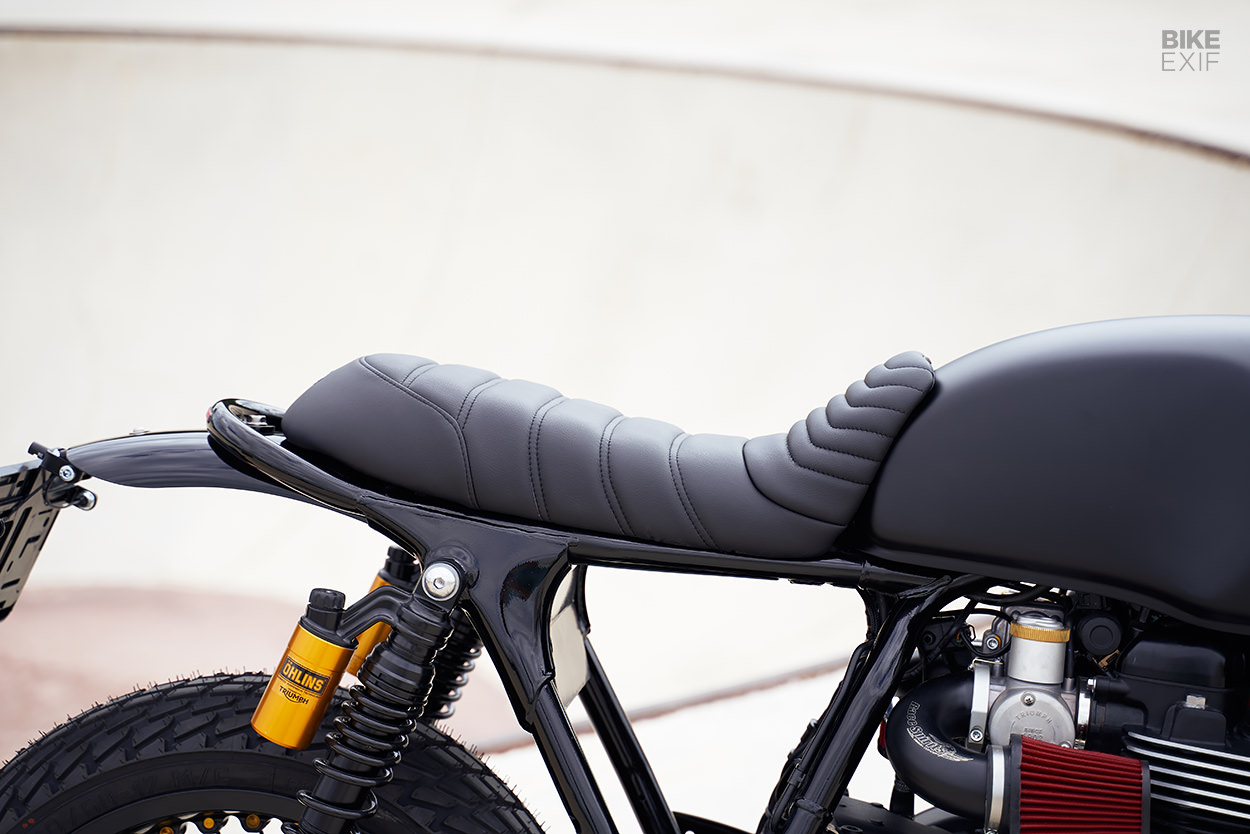 Up top, the team kept the Thruxton’s beautifully sculpted fuel tank, but ditched its seat. In its place is a custom solo unit, covered in a synthetic waterproof fabric.

The subframe beneath it’s been shortened and looped—but it’s more than just a cut-and-shut job. Tamarit shaved off the the passenger peg mounts, de-tabbed the frame, and repackaged all the electronics, swapping the bulky battery for two smaller units. Tearing into the modern Triumph’s electrical system is a daunting task, but the guys have worked on enough of them to know their way around.

Adding some special touches was key to the brief, so the team decided to color outside the lines when it came to replacing the Thruxton’s airbox. Using a pair of curved intakes from Race Spirits, they set up a pair of forward-facing pod filters. It’s an unusual visual touch—but it’s had no adverse affect on the bike’s performance.

The engine now breathes out via a twin stainless steel exhaust system from the Italian specialists Zard. It’s considerably lighter, and raspier, than stock. 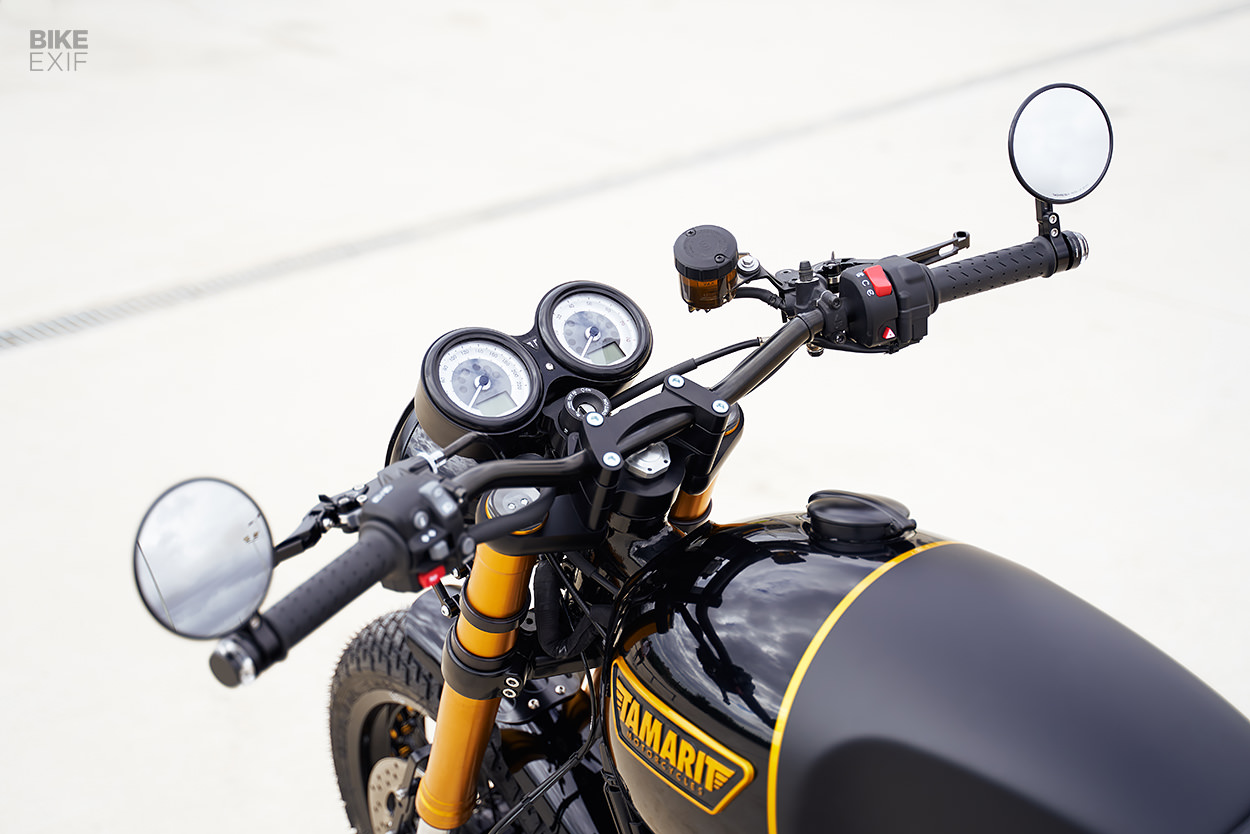 Another crucial change happened in the cockpit: the clip-ons were swapped for a set of riser bars, taking the Thruxton one more step away from its traditional cafe racer roots. Tamarit kept the switches and clocks for the sake of practicality and reliability, and installed Highsider mirrors and Motogadget bar-end turn signals.

The client liked the Thruxton’s original headlight, so it was simply remounted on modified aftermarket brackets, and treated to a Tamarit grill. 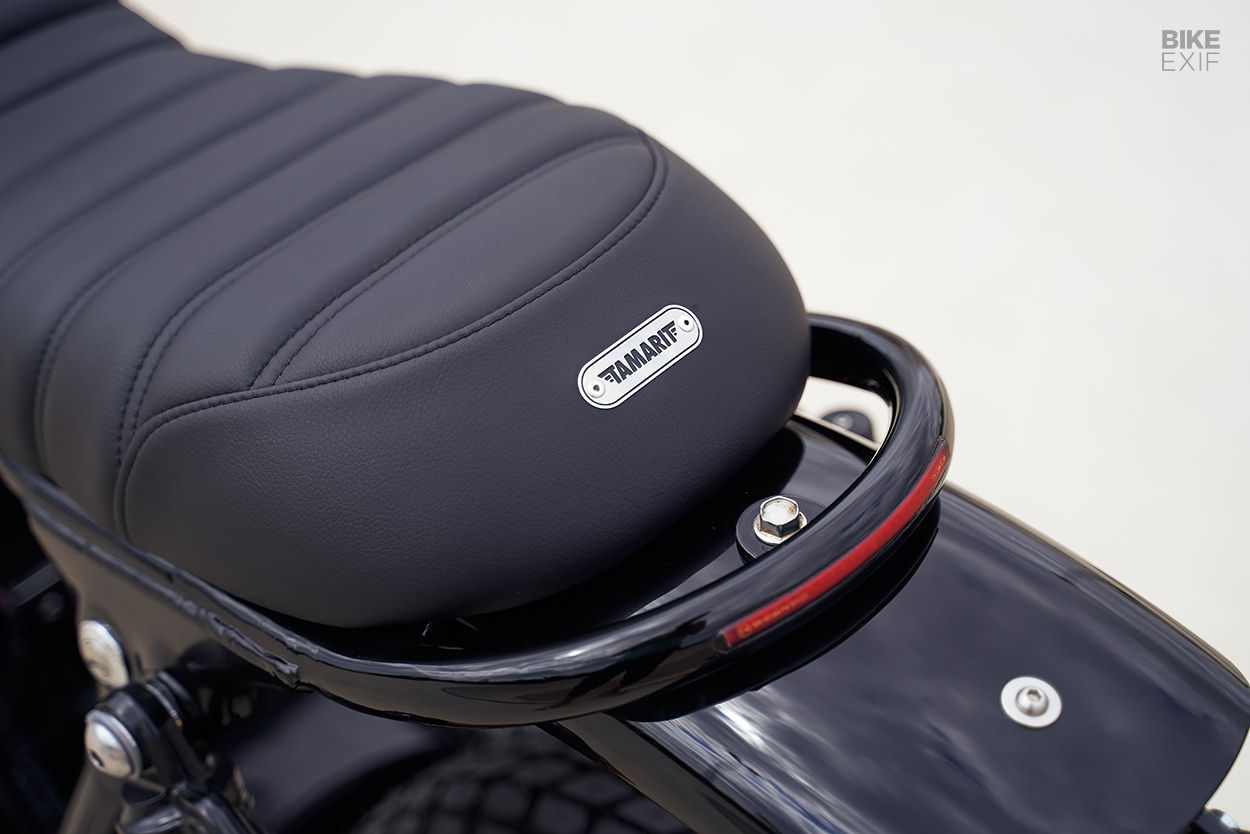 There’s an LED taillight embedded into the rear of the frame, and a pair of Motogadget LEDs mounted on a new license plate bracket. The short fenders at each end are custom parts, and the chain guard, sump guard and radiator cover are from Tamarit’s own store.

Tamarit have a knack for flawless liveries, and Ikigai’s is no different. It’s wrapped mostly in black, with both matte and gloss finished on the fuel tank. Tasteful gold highlights punctuate the brooding paint job—including bespoke tank and engine badges that were milled by a local shop. 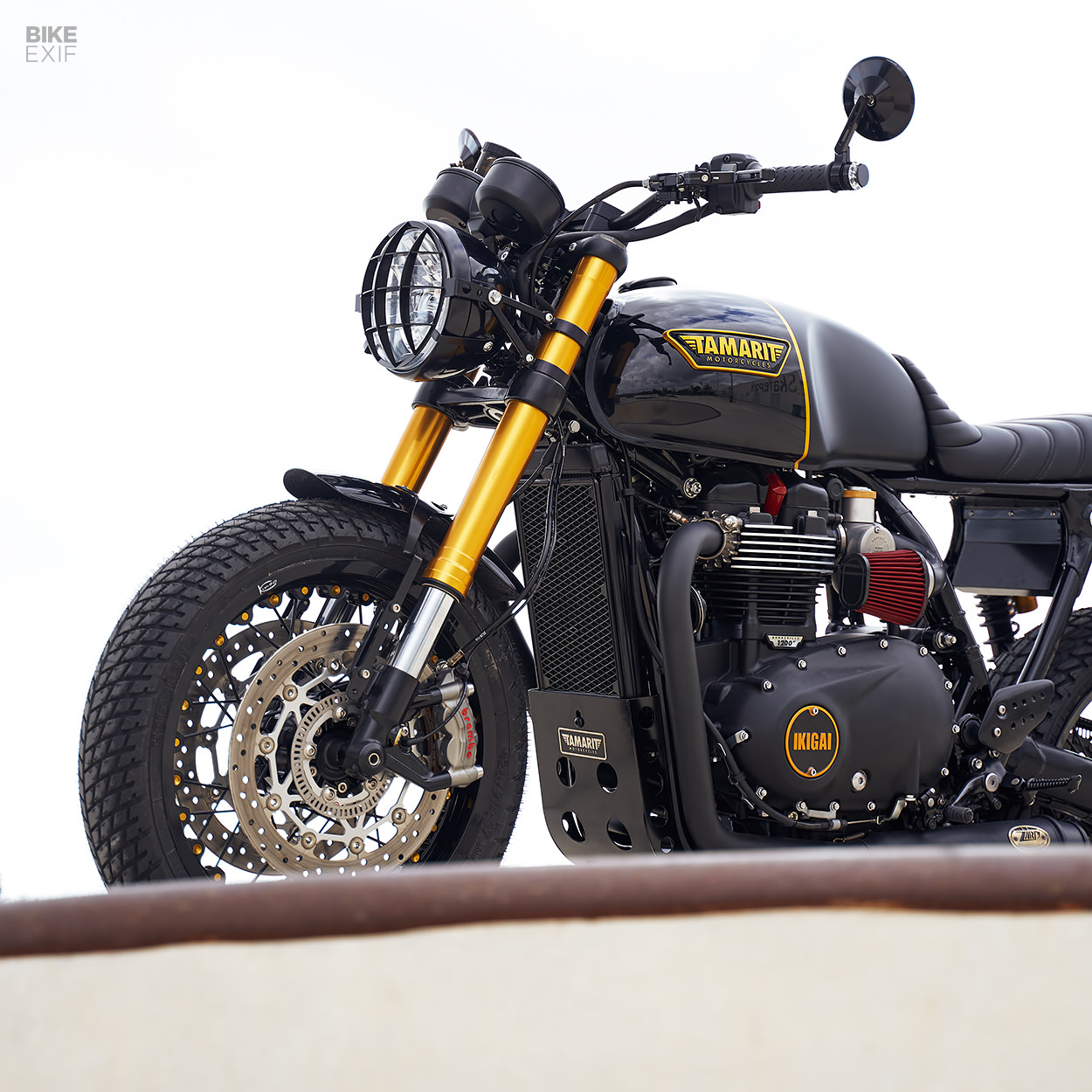 Compact and poised to strike, this Thruxton RS looks bonkers, and is almost certainly more fun to ride than before. It’s another smash hit for the Alicante workshop—and a brilliant reminder that form and function don’t always need to compete. 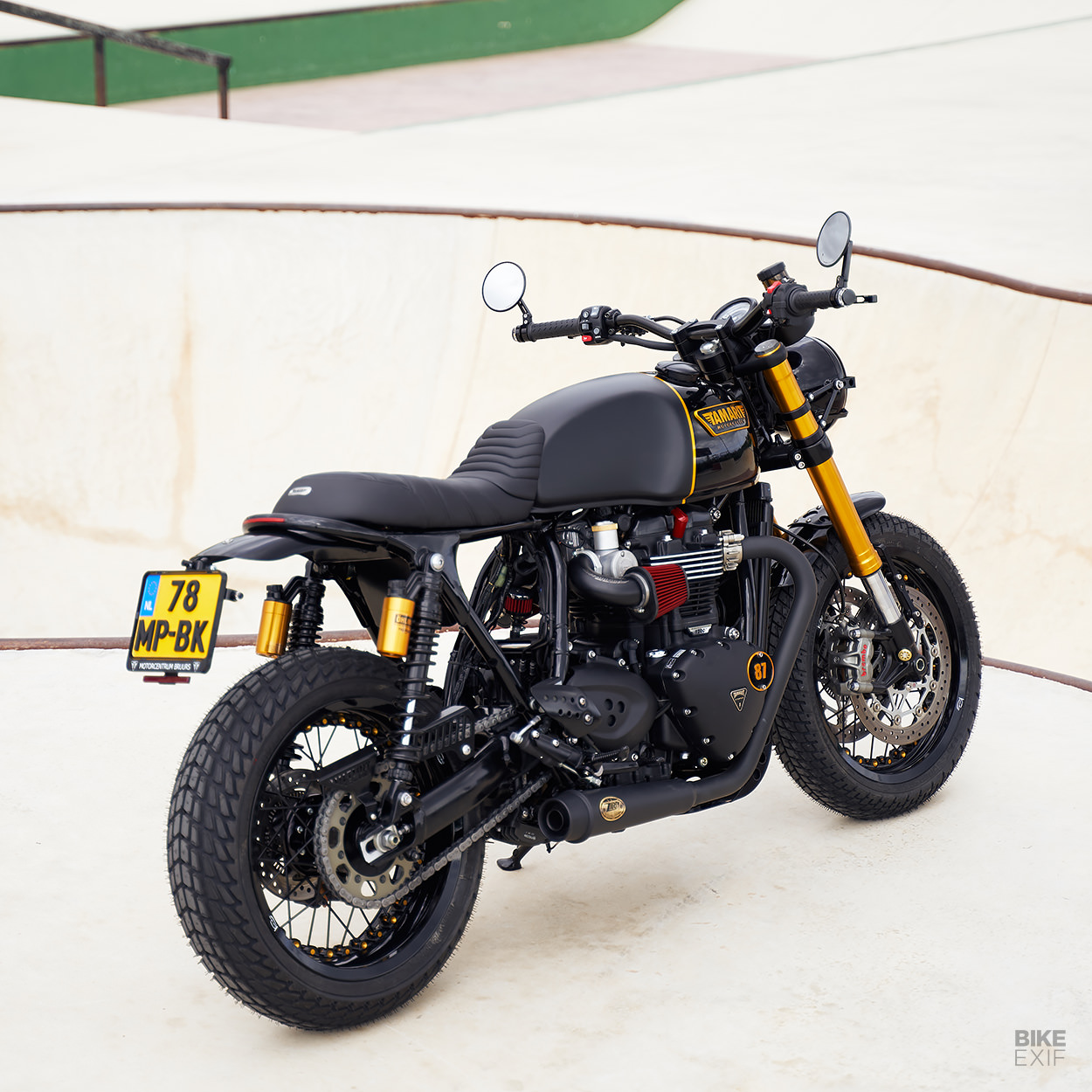