Honda Motorcycle Engines Are The Stars Of This Rooftop Symphony 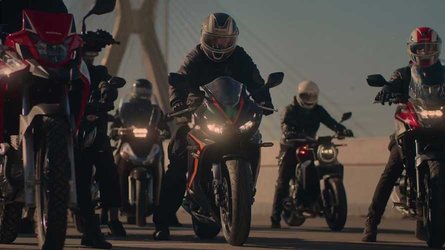 One of the joys of riding any bike you love is often the sound its engine makes. That’s why Honda Brasil created an ad featuring a Honda motorbike symphony on a São Paulo rooftop. Any OEM can tell you about why it wants you to buy its bikes, but Honda decided the best course of action was to let the bikes speak—or sing—for themselves.

Naturally, this required a whole lot of behind-the-scenes work to realize the concept and make something beautiful. Audio production company Hefty, founded by Edu Luke, had what was perhaps the most crucial task of all: making the music of the engines come together.

“To get to the song, we had to analyze the musical notes generated from the rotation of each engine,” Luke told the Drum Magazine. “Thus, we mapped the timbres of the different cylinder displacement of Honda’s line-up, understanding the exact point of acceleration so that we could compose the arrangement and conduct the motorcycles’ symphony.”

The resulting experience is best enjoyed through headphones, as a lot of music is. We’re certain it was even more of an intense sensory experience if you were actually there in person while it was going on. At the same time, what must the riders have heard and felt as they revved their engines to match the demands of their conductor? When you play music with a group, it’s often next to impossible to hear the entire composition while you’re actually playing it.

If you’ve ever enjoyed the sweet sounds and interesting resonances that sometimes occur between motorcycle engines, then you’ll probably appreciate Honda’s attempt to channel that energy into a song. It’s apparently intended as an advertising campaign in Brazil, but it could probably resonate just about anywhere there are motorbike riders in the world.