Here’s Why A 1990 Honda CBR250RR Is Absolutely Magical 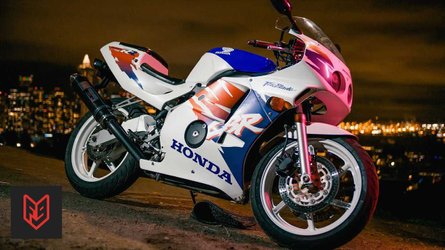 What makes you love any given motorcycle? There’s usually some combination of factors that go into this calculation, but if you had to give just one thing that really puts it over the top for you, personally, what would it be? For me, the sound is usually the best way to get my attention. Handling and general ride quality is obviously important, as are looks, but that comes later.

That’s arguably one of the most beautiful things about a 1990 Honda CBR250RR and its gloriously mad 16-valve, inline four-cylinder engine. The MC22, which was sold between 1992 and 1996 in the Japanese market, wasn’t concerned with making oodles of power. In fact, when new, it made a perfectly respectable 45 horsepower. Importantly, it also boasted a 19,000 rpm redline, with a 20,000 rpm limiter. There’s more than one way to make enthusiasts smile, and Honda clearly knew it.

As Ryan F9 amply illustrates with unrivalled (and completely deserved) giddiness, that makes it exceedingly easy for you and your bike to make the most joyful noises while checking the boxes on every single one of your daily tasks.

Who says your morning breakfast sandwich and coffee run has to be boring? Also, how could it be anything close to boring if your bike makes this kind of ridiculous sound, all while you’re going at completely reasonable speeds for public city streets?

Gear-driven cams are why it sounds the way it does, but they’re far from the only trick bit this Japanese-market classic has going for it. By necessity, 16 tiny valves work in conjunction with four tiny pistons, as well as four tiny Keihin carburetors to keep the fuel/air mixture just right. An alloy perimeter frame aids in nimble, inviting handling—and twin two-pot Nissin brakes up front do a fine job of helping you slow and/or stop when needed.

Style-wise, the MC22 also represents some of the best late-80s/early-90s aesthetics that Honda had to offer. It wasn’t just a hollow representation of a miniaturized Fireblade. No, the Babyblade had a heart and a character all its own—and that’s why it’s remembered so fondly today. In the end, isn’t it the character that makes any bike take up permanent residence in your heart?

As the story goes, in 1994, shortly after license restrictions in Japan no longer required learners to stick to bikes under 250cc, sales in this segment quickly declined—not just for Honda, but across all of its Japanese-market competitors, as well. That’s why a bunch of excess, unsold MC22 stock eventually made its way to Australia to be sold—and presumably, also why you’ll find a wealth of OEM MC22 parts located in Australia in 2021 if you happen to be looking.

May your days be as merry and bright as the smile your favorite bike brings you, from all of us here at RideApart.

Protect Yourself Before You Wreck Yourself