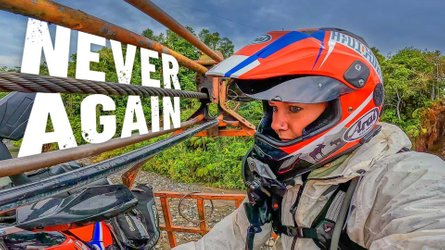 When you ride somewhere outside your comfort zone, you’re likely doing it because you want to have a new experience. You want to explore beyond whatever your everyday life looks like, and do something differently for a change. You’re taking something familiar and comforting—like your motorbike—and the two of you are going on a journey to see and feel and taste and touch what’s out there.

If you’re crossing a body of water, you probably think about bridges and ferries, right? What about cable cars, though? If you visit the Rio Pastaza in Ecuador, that’s apparently the order of the day. They’re beautiful, and tourists frequently find them to be very romantic for you and your special someone to get a good look at the waterfalls, river, and natural surroundings in the area.

In YouTuber Itchy Boots’ latest series, she flew her Honda CRF300L Rally to Ecuador—and in this episode, she took it across the Rio Pastaza on one of these cable cars. It’s as solid an argument for adventuring on a small bike as you may ever see. After all, you’re not getting your mammoth, fully-laden GS onto one of those cable cars by itself, let alone with a single rider crossing in the basket as well.

Still, it’s a bit of a harrowing experience to contemplate with your beloved bike. I mean, even smaller bikes generally weigh more than humans do, and thinking about your bike taking a dip in the water in an unfamiliar place is probably no one’s idea of a good time. Would you do it, if given the choice?

Thankfully, although it took a bit of effort from the very helpful cable car operators to get the CRF successfully loaded into the cable car, everything went perfectly smoothly with the actual river crossing. Later on in the video, Itchy Boots finds a paved bridge that eventually takes her to the city of Puyo, where she stays for the night before pressing on in this particular adventure.