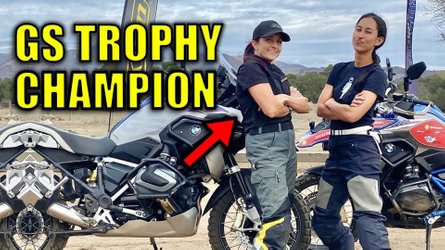 Both very short riders and very tall riders have one thing in common: We both have specific challenges that prevent us from riding every single bike we might want. If you’re a tall rider who’s interested in those amazing early-90s quarter-liter street-legal race bikes from Japan, for example, turning yourself into a pretzel to ride one probably isn’t your idea of a good time.

On the other side of the coin, of course, there are short riders (hello). To BMW GS Trophy Champion winner Jocelin Snow’s way of thinking, being a short rider can be a challenge—but it’s hardly an insurmountable one.

After watching Snow show YouTuber Doodle on a Motorcycle a few of her tips and tricks, in fact, it’s easy to see where shorter riders might even have an advantage, if we choose to use it. For one thing, tall riders can’t suddenly lose inches from their long legs with a simple finger-snap. However, we short riders can absolutely learn new skills that take our height into consideration when handling bigger bikes.

Snow should know. She’s been riding since she was 12, and has owned over 39 different bikes over the course of her riding career. Over time, she’s done a bunch of road racing, flat track, supercross, and the list goes on. She’s taught kids to ride dirt bikes, and she has a YouTube channel of her own where she clearly and concisely demonstrates and explains a number of skills to get short riders confidently maneuvering any big bike they want. (We’ll link it in our Sources so you can check it out.)

Back to this video, though. Doodle is most comfortable riding on the street, and height-wise, she’s a little under 5-foot-4. Snow stands even shorter, at slightly over 5-foot-1. Here, Doodle visits Snow’s backyard training course, which the latter rider has set up specifically to help her train for GS Trophy Championship competition.

As most short riders already know, as long as you know where all your controls are and can reach them, the actual riding part isn’t usually what’s difficult. Instead, it’s stopping, starting, and low-speed maneuvers (because you’re constantly thinking about having to stop and/or start from a standstill) where things tend to go wrong.

However, as Doodle points out, most of what’s stopping short riders from tackling bigger bikes is in our heads. Like Doodle, I’m also a little under 5-foot-4. There’s a video in Jocelin Snow’s Be the Boss of the Bike series where Snow demonstrates her technique for reaching an adventure bike side stand that her legs are too short to touch when she’s just sitting straight up in the saddle.

While it probably wouldn’t work for a bike with a side stand that’s super far forward, Snow makes a simple, practiced motion of shifting her weight around in the saddle to swoop down and precisely kick that sucker into place look like second nature. One leg alone might not be long enough, but what if you use both legs? More than anything, it’s all about balance.

If you’re a short rider, too, then you’ve probably had tall riders give you well-meaning advice about how you can make your riding life easier. Some of it is just plain bad, but even the stuff that isn’t can be difficult to take seriously. Why? Quite simply, because they’re not coming at riding from the same level of lived experience you are. Watching Doodle learn from Snow, and then visibly improve both her off-road skills and her general approach to riding bikes as a shorter rider is super motivational. If there’s any energy we want to take into improving our own riding skills in 2022, it’s 100 percent this.

MotoGP Will Not Visit Countries Requiring Quarantines In 2022